Choose happiness - a person should feel Love as a Personality

Transcripts of the video "Freedom from Beast’s Dictatorship within Yourself". Part 5

Personality and masks - why people wear masks all the time?

Tatiana: People have grown up expecting some appraisals from others so much and relying on what other people actually think about them, that at some moment they are just living a life which is not theirs…

Tatiana: …that they live out the life of each person they meet on their way…

Igor Mikhailovich: Just look, we have discussed it more than once, right. People wear masks all the time, they regularly imitate someone, and so on. Why? Because consciousness is arranged like that, it doesn’t give life. In fact, not a single person can answer who he is.

Tatiana: The real one.

Igor Mikhailovich: Who he is real. No one, not a single person can answer, because he is multiple.

Tatiana: Of course. And here…

Igor Mikhailovich: He can’t find himself. That’s why life of any person is foolish if one doesn’t live by the Spiritual World. And this is indeed so. 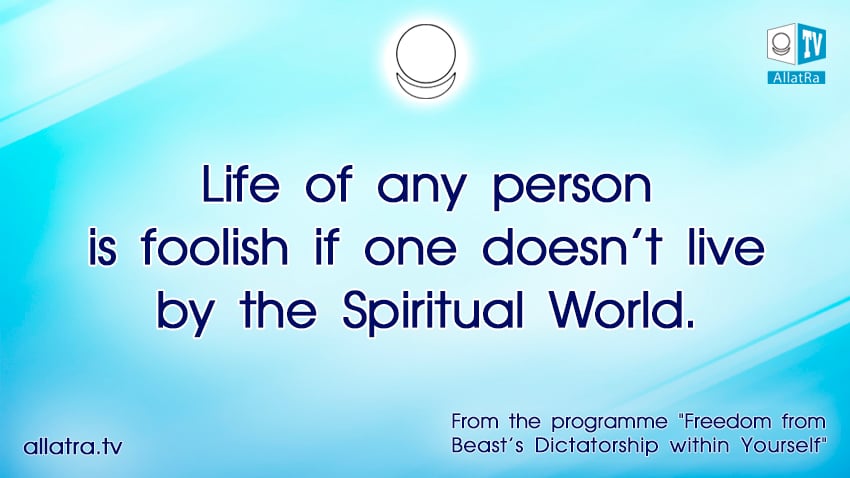 One considers himself to be a great painter, because he paints. He’s in this mask. While he feels sadness. He is happy only when he’s praised, when he’s exalted, that’s when he has some satisfaction. It is temporary and quick-passing, because he realises that it’s not giving anything - anyway, everything remains empty inside. They have praised and extolled him, they left, and no one cares about you with your paintings. The same about a builder. The same about, I don’t know, even a politician. He has deceived lots of people, has risen, has been elected, has been running for something, something else, it seems so, right. And then he realises that all this is empty. Life has passed, and what’s next? Whatever job we take, no matter what person is doing, isn’t it?

Tatiana: It's just so sad…

Igor Mikhailovich: Until one finds himself, all this is foolishness, it’s mask-wearing, imitation, and so on. The system always imitates. We have discussed this more than once. A singer is singing a song, you are listening. As soon as you’ve invested attention, you start listening carefully, you start enjoying it,you get carried away - the very next moment a thought comes that you are singing yourself. Imitation: you are on the stage, singing, and people are applauding you. So wait, what do you like: the performance of the song, the aria by this singer or how everyone applauds him and envies him? As soon as your consciousness has imposed on you the thought about his greatness, it immediately tries to exalt you, well…

Zhanna: Idealization of the image. 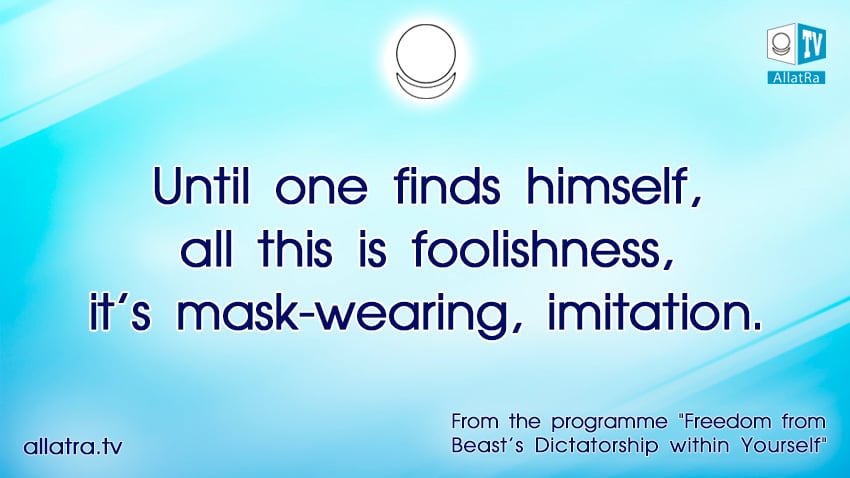 Igor Mikhailovich: This is so funny and foolish. These are such manipulations. As a matter of fact, even little kids aged 5-6 years should be aware of these manipulations. And they should keep their animal on a leash. Then a spiritually free society will grow up, as it was at some point in time after Atlantis.

Tatiana: It’s a very important and serious topic. Because it turns out that the precious attention which a person needs for merging with the Spiritual World, - just to understand where it is lost during a day, right? And so…

Igor Mikhailovich: Well, constantly, because consciousness is attuned to this: as soon as you’ve become consciousness you’ve already lost it. The fact that it can make you think about something good might also be a part of manipulation. It will immediately substitute it with something negative, and self-assessment starts. So, at the very first stages the most important thing is to monitor what you are being fed with. Just as simple as that. You won’t eat if you are served, pardon me, nails instead of some dish. Well, there are people, they eat those, I agree. They are a few only: one ate an airplane, another one ate a bicycle. If he likes it, God bless him with good health. But in fact, an ordinary person will not eat nails, stones or anything like that. He’s not a duck, isn’t he? To eat a duck is one thing, but to eat stones is something different. So, why do we swallow and finance all the thoughts palmed off onto us? What for? 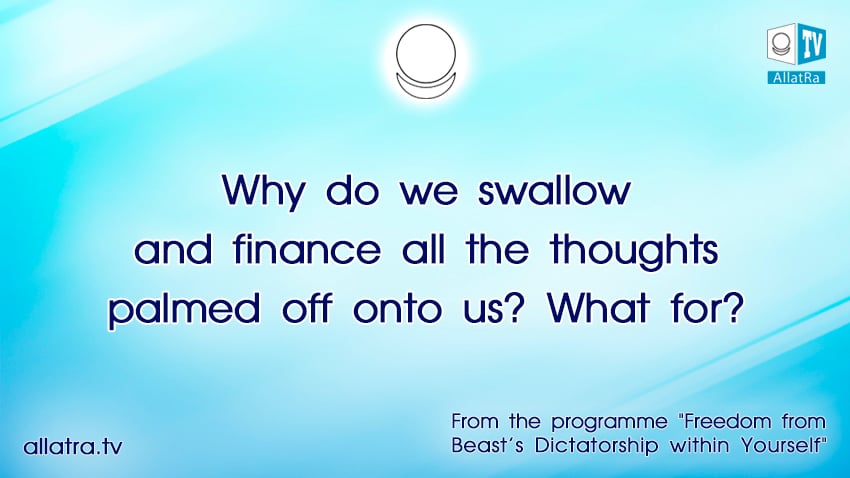 Tatiana: Completely mindlessly, automatically, without understanding, without separating oneself from consciousness.

Choose only happiness and joy

Igor Mikhailovich: Absolutely right. While here one should be a gourmet, and a very choosy one. Choose only happiness, joy, and so on. But now many people parry by saying, “How can I choose joy, if around is only… and I am being…?” It starts exactly from this. Here's around, and you are being.. - but you rejoice. And nothing will change. What will change if you are in sorrow, crying, pull your hair out, cuss out everyone? What will change? Will your suffering do anything good for anyone? No, it won’t. It won’t do anything. And you will not feel better.

Tatiana: This story which you’ve mentioned just now, “Here is around, and I am being…”, is going on since early childhood.

Tatiana: Because, if to observe, person is always building some relationships, either in kindergarten or in school…

Tatiana: …with peers, with partners, with schoolmates…

Igor Mikhailovich: In assessment and confrontation - this is how the system works. But look at the behaviour of, let’s say, two chickens, two puppies and two lion cubs, two baby elephants and two children. After all, they behave absolutely the same way. Why? Because the animal part is intensely developing. Excuse me, but is there anyone among us who develops the spiritual component in kids? Where can a child obtain it? To make a kid pray, strive for God means to get another Jughashvili, right? Why? Because hatred and rejection arise in a person, he has no Love. But what should a person feel? Love. He should feel it as a Personality. Personality should develop, and perception through feelings, too. Because that’s the way it is. 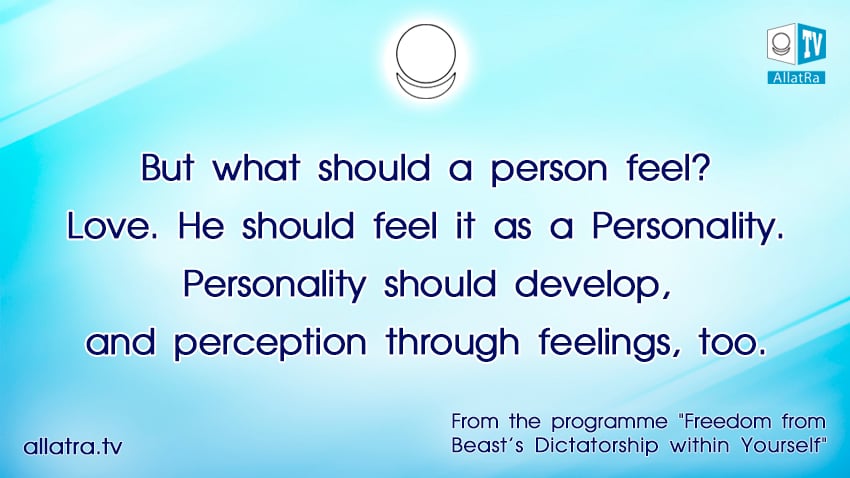 Tatiana: It’s just that even this phrase, yes, kind of coming from consciousness that I’ll be happy when I fix my relationships. But the question is, “Who should you fix these relationships with?” Not with another person, first of all. That is…

Igor Mikhailovich: By no means. With yourself.

A person seeks freedom and happiness - but consciousness substitutes it

Tatiana: What kind of relationships does every person look for, in the first place? The need of these aspirations…

Igor Mikhailovich: A person seeks a need… Let’s say, everyone’s need is the need for piece, for happiness and joy, for freedom - this is what we’re talking about. The first thing that a person seeks is freedom. But consciousness forces him to look for it, this freedom, in the external. 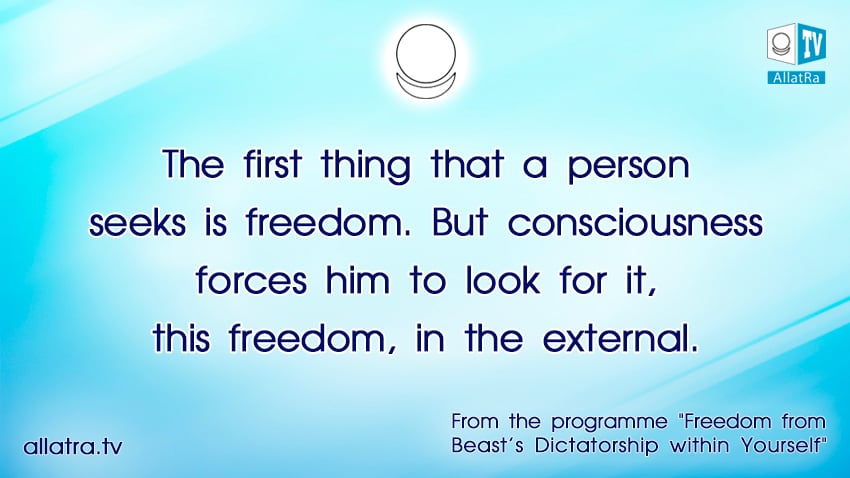 But internally, a human is striving for freedom from exactly the dictatorship of consciousness. Why? Because, as we’ve already started talking about it, he feels like a downtrodden chicken, when an Angel becomes, let's say, fully hounded by the Animal nature. And he sees nothing, understands nothing and feels nothing. And how can an Angel feel in a person? In no way, when an Angel is being gnawed and dictated. A human thinks that this is who he is, “This is my character, this is who I am.” But whose directive is this? Character… We’ve seen a lot of people with various characters, right, who become wonderful, amazing and free people.

Igor Mikhailovich: Isn’t it so? It is.

Zhanna: Well, you’ve touched upon such a good point about what is being implanted by parents since childhood. Indeed, there is even a whole branch in psychology; it covers what psychologists who work in schools and universities face, that is, when they work with people who are growing up. People, not understanding in adulthood where these patterns came from, that is, “You can’t do anything”, such directives which come from the very…

Zhanna: …enslave. And so, in adulthood this shyness, this resentment, envy, and anger already appear.

Zhanna: All these patterns that are being formed…

Igor Mikhailovich: But here again, we are simply taking the development of human consciousness. In this way, consciousness is formed. And how is the child's Personality being formed? It is simply not formed. Can you give examples of how your Personality was being developed - the spiritual component of perception of love, joy, Supreme freedom and everything else through feelings? You can't.

Tatiana: Well, actually, there is just an experience of the fact that in childhood you certainly…

Igor Mikhailovich: …felt. And now let's take: after all, every child feels that there is something. He’s much freer than others, but consciousness is just as active.

Tatiana: Well, there are both body and consciousness (IM: Correct), but you still feel yourself free.

Zhanna: Yes, but a certain moment comes when it is lost, this freedom.

Zhanna: Meaning, it goes away somewhere, it disappears.

Igor Mikhailovich: But any child is vidently evidently dual. He still has purity and freedom, because consciousness is not so strong, it is being formed. But at the same time, he is cunning and capable of any meanness. Why? Because, let's say, prohibition limits aren’t really set yet in that very consciousness. I emphasize, in consciousness, but no way in the development of Personality. However, every child feels that there is something more, that the world does not end here (Zh: Yes, but there's some…). This stage is interesting. 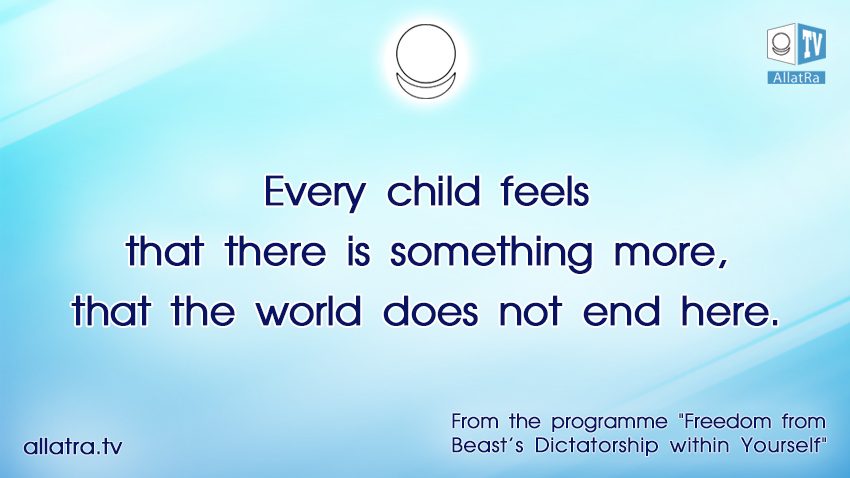 Well, we have such a community. Why? Because cartoons are turned on, all the information that comes from three-dimensionality. And, excuse me, a person is being formed under the dictation of consciousness. All the information that he perceives is being processed, assimilated, and it forms a person. And what does it mainly form? The animal component. It doesn't form a spiritual orientation in a person. Why? Because… We've again touched upon, well, no matter what we turn on: TV, radio, Internet, all the information we have - it’s continuous negativity, continuous blockage and precisely development… let's say, enhancement of the animal component dominance. We have almost no examples of spiritual feats, of good and joy. There are almost none. Why? Because market conditions are such that consciousness is attracted by killers, heroes, superheroes, and those blockbusters. All this is being shown, so people gladly go there, yes. Whereas if you make a film about a spiritual person who was fighting with his own consciousness and eventually won - such a life experience. Well, who will go to watch it? No one. Well, guys, if one, two or three times they make only this and neither make nor show anything else, fashion will eventually change. We should recall what Bernard Shaw said, right? Fashion and beauty, let's say, as well as understanding of everything else is imposed on a human being. That is… This is nothing other than dictatorship. 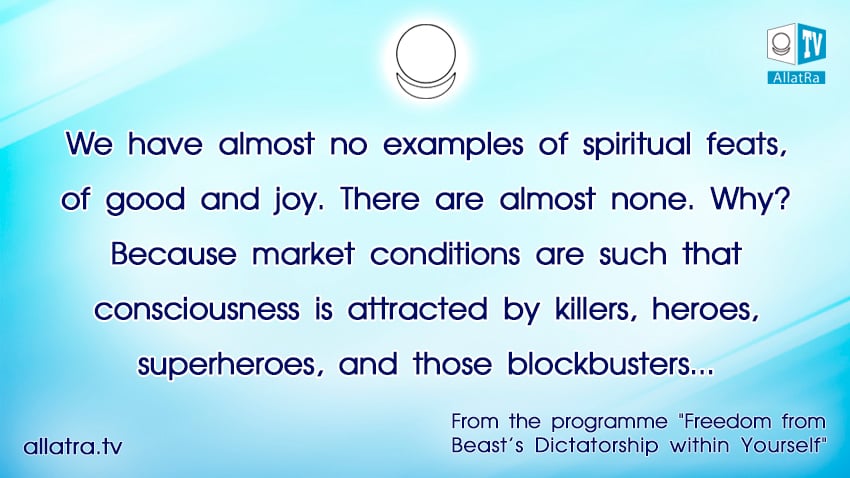 Previous article "What is satan in fact? Become an Angel inside yourself"
<-- Part 5 (pages 19-23) -->
Next article "What does it mean to be human? Personality means action"