What does it mean to be human? Personality means action

Transcripts of the video "Freedom from Beast’s Dictatorship within Yourself". Part 6

People lived without evil. Until the descendants of the Atlanteans came and taught them how to be slaves

Igor Mikhailovich: But again, let's go back to what was said in the ATLANTIS video, yes. Let's say, the pre-Sumerian time. Well, the Sumerians is the wrong name, but what's the difference. After all, we know the Sumerians as the first civilization, when the first civilization appeared. And what is a civilization in modern society, which is imposed on our consciousness, when it became a state, right? That is… And it became a state when who appeared? A lord (T: Some kind of a leader). Yes, a master. And while there was no master, there was, pardon me, nothing. But now we are referring to history, already to archeology. It turns out that before there appeared priests, leaders, and dictators - those who pulled out hearts from still alive people and sacrificed them allegedly to some gods. Meaning, not a priest sacrificed himself. The priest sacrificed particularly a human. What for? For others to feel fear, to obey, and the like. After all, before the power of these manipulators there existed a culture, as they say now. What kind of culture was it? The same people, the same civilization, the same buildings, but people lived without evil. And that was the point. Until the descendants of the Atlanteans came and taught them how to be slaves. How to stop being free, just note, and how to be slaves. That's what was taught. And it goes on and prevails. And today we, unfortunately, don’t have a good experience for development of the Personality.

What does it mean to be human? When human community decides to change something, it changes it

Igor Mikhailovich: Well, at the same time, everything can be changed. Everything depends on people and their choice. And, to be honest, thanks to THE UNIVERSAL GRAIN video, which was created by people themselves, there's still hope for the better. That people can do a lot, and that's true.

Zhanna: People themselves have shown that they can.

Igor Mikhailovich: People themselves have shown that they can. This is wonderful. Everything is possible. But when human community decides to change something, it changes it. And while humankind, excuse me, lives under the dictation of its own consciousness, it is unlikely to happen. In fact, everything is simple. When people understand how they should Live, they will start Living.

Igor Mikhailovich: But this can be done jointly. Simply to actually stop seeing bad in each other. We must learn to see good in each other. And to contribute to the development of this good in one another. And then it will all fall into places.

Zhanna: Yes, we should support each other, and not be shy to be kind, and do something for another person. After all, people…

Igor Mikhailovich: People should learn to feel each other.

Zhanna: ...learn to feel another person.

Zhanna: ...learn to thank him, to love, to express, to feel.

Igor Mikhailovich: There are Angels, there are beasts. And people face a choice: to create a society of Angels or a society of beasts. Isn't that so? 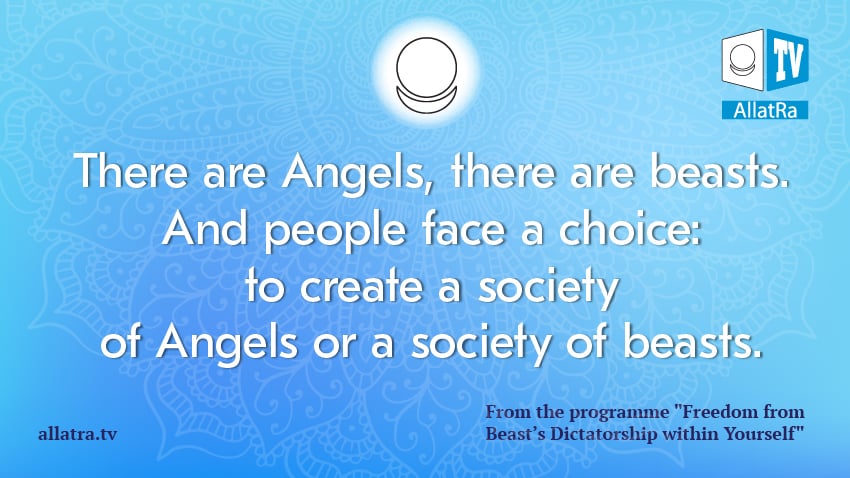 Tatiana: It’s also necessary, somehow, to put this Love at the head of everything, because very often during the day the system, perhaps even while you are performing some work moments in service or something else, it diverts attention even to some little things. As if some kind of busyness or something else gets activated.

Igor Mikhailovich: Well, this is for sure. After all, it’s its function to pull the blanket on itself, you see?

Tatiana: Basically, it often happens that the system diverts human attention from Love, from what is really important. Perhaps, by the way, this also originates from the moments of childhood when some task was more important than expression of Love.

Igor Mikhailovich: This is how consciousness works. Attention which it consumes is the energy for its existence. It does everything in order to distract you. As soon as you have invested higher concentration of attention and lost… I will repeat it once more, I once gave an example, you should invest 90% of your attention into spiritual development. 90% (I will say in a different way) of the food for the Angel and the beast you should give to the Angel, and 10% to support the functions of this beast which should do all the work, engage in intellectual, physical labour, support and sustain your body, take care of your daily life here, and at the same time not to palm off to you anything bad, wrong and harmful to you. You see? Then everything will be right.

Igor Mikhailovich: But when we start investing the power of our attention and divide it disproportionately, let’s say, not 90 to 10, but vice versa - then we lose.

Zhanna: In addition, I'd like to say, and what about "how"? Give me a mechanism.

Igor Mikhailovich: A negative thought is coming to you - reject it. Simply reject it. What do you need it for? Think about love, think about good. It doesn’t work out very well at first, but if you do it, it will work out. Simply think about happiness. Make yourself think and accept thoughts only about happiness, only about good. And eventually you will realise that you are Personality, not consciousness. Why? You’ll understand that it’s you who dictates, and who is that one who dictates, and you can feel him. And as soon as you begin to feel, you shouldn’t lose it. Here you need to fight for this perception through feelings and to develop it. Consciousness will attack. Well, in which sense attack? It attacks while it's full. But it’s you who feed him. Therefore, it’s very simple: don't support thoughts, don't support emotions that are negative, bad, not good ones. Only positivity. Evaluate any person only from the positive side. Don't criticise. Understand, feel. 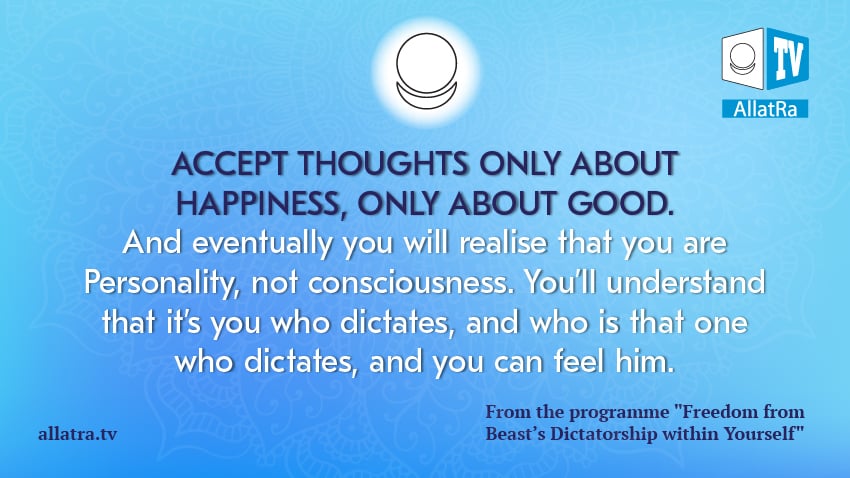 Since a person has done something, has done something negative, it means that he, well, let's say, has done it under the dictation of his own consciousness. It's the beast in him who has done it, it's not the Angel who has done it. While blaming both the Angel and the beast in another person is unfair. What does the Angel have to do with this? His Angel is undeveloped just like yours, since you judge him. Well, isn't it so? Therefore, it is necessary to keep, say, all your thoughts under such light surveillance, let’s say it carefully. Right?

Tatiana: There is also a topic on which people often simply pour out their attention - it's the topic of envy. And what does the system say? That definitely, what one person has, you cannot have a priori, as the law of physics. That there increases…

Igor Mikhailovich: Oh, there are so many topics. Tatiana, really, in fact there are a lot of topics - it’s envy, it’s hatred. And we can talk about this forever. And every person knows on what and where his consciousness catches him. It’s not important. Everything negative that oppresses you and doesn’t make, doesn’t give you a truly free worldview — it’s all negative, you see? It can satisfy you, raise emotions, release adrenalin or something else negative.

Igor Mikhailovich: But these are various forms, of course. However, the essence is the same: to distract, to distract from Life, to manipulate you like a monkey. But are you a monkey? Well, a simple question, "Do you need this?" Live, live happily. Why suffer when you can be happy?

Igor Mikhailovich: This is really so.

Zhanna: Also, there is such a moment of misunderstanding among viewers. They commented under the programme with your participation. It was written there “just Live, just love”. There was such a substitution from consciousness among people, that to just love and to just live, it means going with the flow, doing nothing, not engaging in anything. And just…

Igor Mikhailovich: This is exactly the dictation of consciousness.

Igor Mikhailovich: There you are, like an amoeba, doing nothing: where the wind blows, there you float – that’s inactiveness. Well, some religions were based on this, some, in any case, still are: not to step on an insect, not to do anything, and so on. Thus, you will remain nowhere, and will be no one. You’ll be a lazybones. Consciousness twists whatever it wants. The first thing is proactive attitude. We say it once again, when a human really perceives this God’s Love, this Sun inside, he can’t sit still. Well, isn’t that so? How can you not share this, how can you sit and greedily hold it? You can be greedy about a reflection of the Moon, which creates an illusion that you’ve understood something, but this is not the Sun. This is merely a distorted light coming from the Moon. And it’s precisely what causes those understandings, allegedly. All this actually comes from consciousness. These are the games of consciousness. Whereas, when it is true, when it is Alive, when it overfills you, then, excuse me, you won’t be lying on a couch and dreaming. 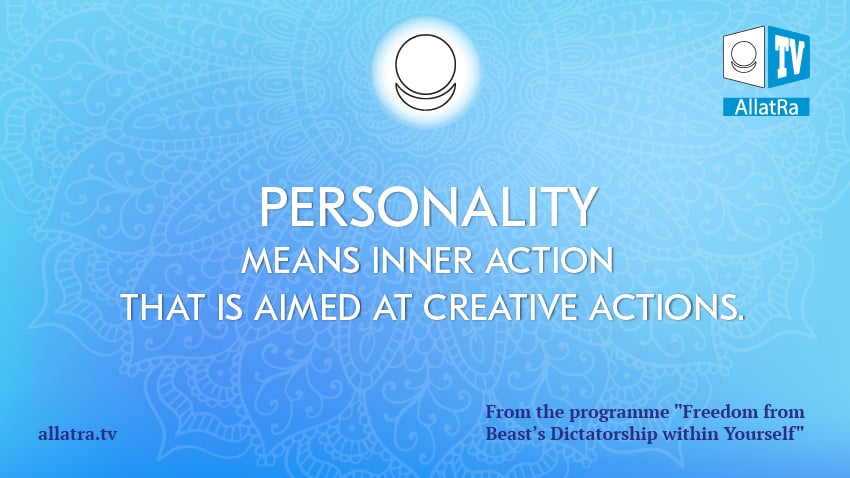 Igor Mikhailovich: When you understand that there's God, when you feel this Love coming from Him, well, and you understand that so many Angels are jailed and remain in a miserable state because of their beasts that yank them as chickens, then yes, it starts aching right here. And you wish to give a bit of freedom, to help. It is their choice, one cannot dictate, “Don’t do this, do that.” No. A human has the right to choose. If one wants to be a chicken, let one be it. But if one wants to become an Angel, one should become an Angel. It’s impossible to hold this. And inaction is unrealistic here. Inaction means a lie from consciousness. This is a substitution.

Igor Mikhailovich: Of course. Personality is a part of the Spiritual World. And being, so to say, in an oppressed state, it is striving for Home. It is moving. And since it is moving, much is changing.

Tatiana: Every person wants that affinity…

Tatiana: …and to become an Angel…

Igor Mikhailovich: And who forbids him?

Tatiana: But consciousness draws him a picture that he’ll become an Angel someday.

Igor Mikhailovich: It’s the first in the choice, when a human awakes, when he feels, that’s when he becomes an Angel. Though a little plucked and a little weak, but an Angel.

Igor Mikhailovich: This is already the beginning, of course.

Tatiana: This is a perfect understanding of the fact that you are an Angel now, not someday.

Igor Mikhailovich: Well, put simply, a human is both an Angel and a beast. The only question is who dominates, and what will remain after a short period of time we call life? The Angel or the beast? Dead or Alive? 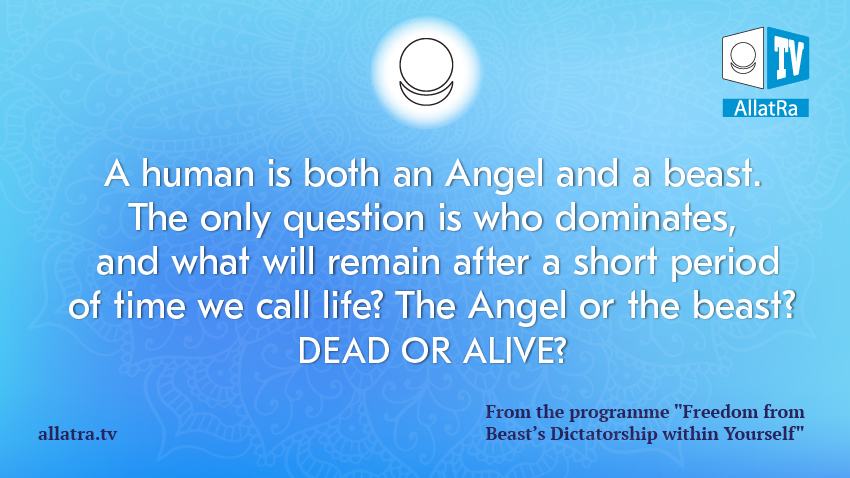 Tatiana: Not to succumb to panic that drives a person to achieving this, but to feel that you are feeling God now, that now you are being in this…

Igor Mikhailovich: And this is what you should live for. An Angel is precisely a part of the Sun. This Being Itself radiates.

Previous article "Choose happiness - a person should feel Love as a Personality"
<-- Part 6 (pages 23-28) -->
Next article "What is Spiritual Love and Human Love?"

Watch the programme with English subtitles by the link.