How to stop worrying and start living

Transcripts of the video "Freedom from Beast’s Dictatorship within Yourself". Part 10

How to stop worrying about the future

Tatiana: Besides, quite a considerable percentage of where human attention goes is that people are worried and concerned about their future all the time.

Igor Mikhailovich: You shouldn’t worry about it, you should start Living now. And then you’ll understand that you don’t have future. You have infinite and boundless Life in the Spiritual World. Whereas material future will end already tomorrow. Today you have it, and tomorrow you don’t have it anymore. And when a person understands this, he stops doing stupid things. 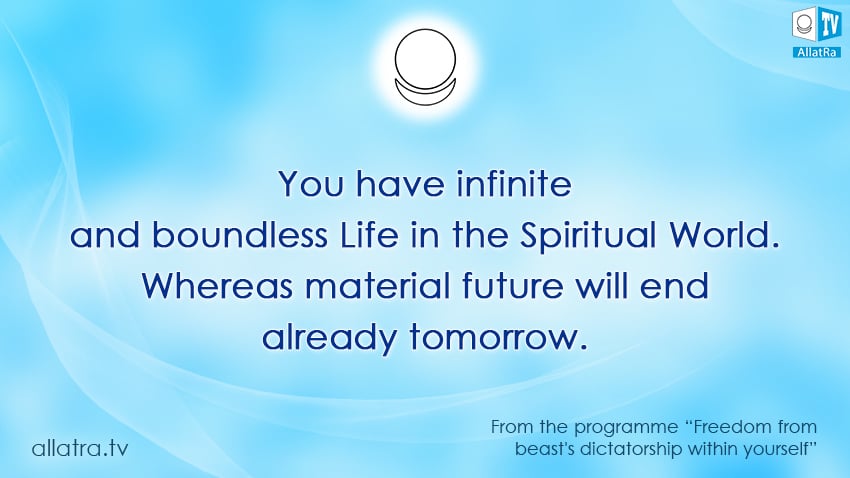 While simple planning, like, again, to build a house, to do this and that, even to choose a grave for your body at a cemetery - well, this is a natural process, you see? And it doesn’t interfere with life in any way. Well, what kind of making plans is this? This is banal distribution of, let’s say, time that maybe is left for you, of your stay or imprisonment of you as a living being in this dead organism and in this dead world, inevitably dead. And the fact that it is dead, well, pardon me, we've said this more than once. After all, there are particles of worlds, planets and all kind of things in you. And so will you become particles of other people, of all kinds of insects, bugs, including Chihuas and whoever else. Well, isn’t this right? It is.

Tatiana: The most interesting thing is that every person knows what is needed for the happy future, that it is beyond the limits of matter.

Igor Mikhailovich: But consciousness prevents one from grasping this. That’s the trouble. Why? Because people live by wrong things. It’s elementary, simple knowledge which is available to entire humanity, which people used to live by not so long ago, before statehood emerged – it was available to people. That’s why AllatRa, this very sign, was present all over the world. Now this… Now we are sitting and telling about this, you see, about simple, elementary things which everyone should live by, which should be… well, a human being must do this. This… This is Life! But this is inacceptable today for very many people. Why? Because consciousness forbids them.

Tatiana: There’s a habit of living by consciousness, which can be changed.

Dictatorship of the dead over the Alive

Igor Mikhailovich: It’s not a habit of living by consciousness. It’s a lack of knowledge that there’s Life. People believe in everything they like: that they will utter certain rituals, do something, and they will be rewarded, someday something will come. And consciousness forces them to believe in this nonsense, but at the same time not to work on themselves. And in no way to control their consciousness. Meaning, the power of consciousness, dictatorship of the dead over the Alive.

Use your attention to stop worrying about tomorrow

Tatiana: There’s also a widespread question, “Where’s this button which one should press within oneself?”

Igor Mikhailovich: The button exists, I’ll repeat once again, and it is very simple. This button is called attention. While distribution of attention is exactly pressing on the button. It says, “It’s bad”, but you say, “I don’t want bad, may everything be good.”

Tatiana: And that it may be retained…

Igor Mikhailovich: That's all. Consciousness tells you, even together with your doctor, that you will die tomorrow. Well, you have such a diagnosis. And that's all: there is a fuss here, or there is humility, or something else. But you can say, “Well, it’s you who will die. Tomorrow? Good."

One should start Living here, now and right now

Igor Mikhailovich: “Whereas I will start Living today,” you see? A simple technique. There is no simpler tool. And, as you’ve said, "One should start Living here, now and right now." And just Live. It’s clear that it’s necessary to get to Life itself, Personality should…

Igor Mikhailovich: …get stronger, develop. And you should. It takes certain time, effort. But if this is your choice, then you should Live. While if you are engaged in the process of spiritual development - well, this is… Then you can do it your whole life, right? Everything is simple.

Zhanna: Also, there’s such a question. A person cannot forgive himself, meaning, something happened in his life (IM: No), that is, regarding lost opportunities…

Igor Mikhailovich: No, that’s not true. These are all games of consciousness. A person can’t forgive something, he can’t do something else. You see, all these are forms of egoism, all these are games of consciousness, of this Chihuahua. What difference does it make to me whether it turned with its tail, with its face, lay on its side, on its back - all these are games of the animal. You either Live - and then everything is wonderful, or you don’t live - and then you have lots of problems.

You can’t forgive yourself, you can’t forgive someone. Who cannot forgive? Who's playing? Consciousness is playing. The animal is playing. It gives value to the past, depriving you of the future. Well, if you want to exist like this - then exist, that’s your choice. After all, it's your Chihuahua that commands you. 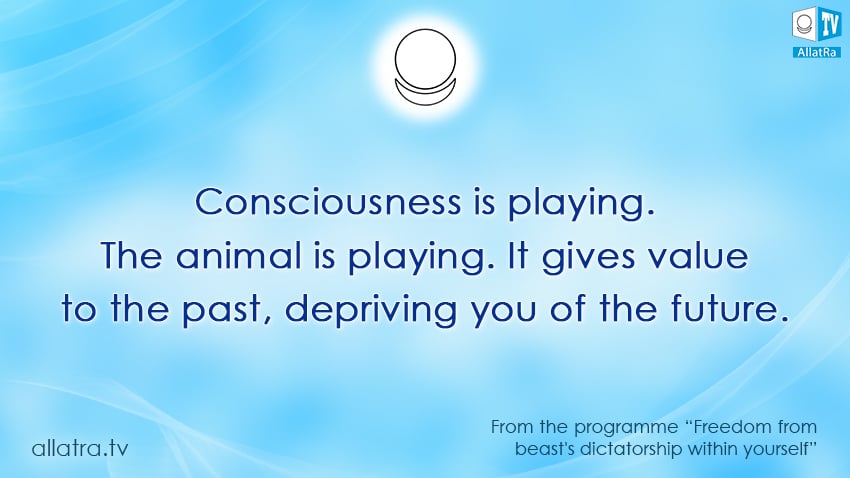 Any problem is only a program that eats your life

Zhanna: Right, it's just that people often get fixated on their problem which haunts them.

Igor Mikhailovich: No, they are not fixated on anything. These are banal programs that work and eat their lives. And at this time, excuse me, they like tomatoes ripen for someone to eat them. Well, isn’t it so?

Igor Mikhailovich: And what for? This is a simple, banal lack of understanding. I’ll say it once again, this is lack of knowledge of elementary things, elementary truths which, by the way, are set forth in all religions, but nobody interprets them. Why? Because they don't know, have lost and forgotten them. Because… well, that’s how we’ve changed the world to what we have now. And an example of this is, again, if we look globally at the world, well, it's really unpleasant and creepy. At the time when we should unite, sit together and think, realising that in the near future there’ll be not that plenty of space and territories, and we’ll have to survive somehow, to develop technologies, and we should consolidate in the world and as one united family, now we are being divided more and more, right? And we perceive this as normal, as natural. Because in the future - will there be problems or won’t be any? Well, it’s not a big deal that climate will change, so what? So far it’s good. And when it changes completely, well, we’ll come up with something, will live… No, you won’t be able to solve anything then. That’s the way it will be. Well, isn’t that right?

How the system hides the truth about the future of humans

Zhanna: It is. The system postpones everything for later, while at this moment it itself…

Igor Mikhailovich: Well… Why have I given this macro example? On both the micro and macro scales everything is fractal. The system works according to the predefined patterns. Do you think anyone in Atlantis believed they would perish? Or didn't they know about it? Everything started to collapse exactly in the same way. And until they were completely washed away… Only a small number of people could choose a normal, let’s say, existence. Well, let's say, to stay alive, right? In a normal existence to become alive, to be more exact… 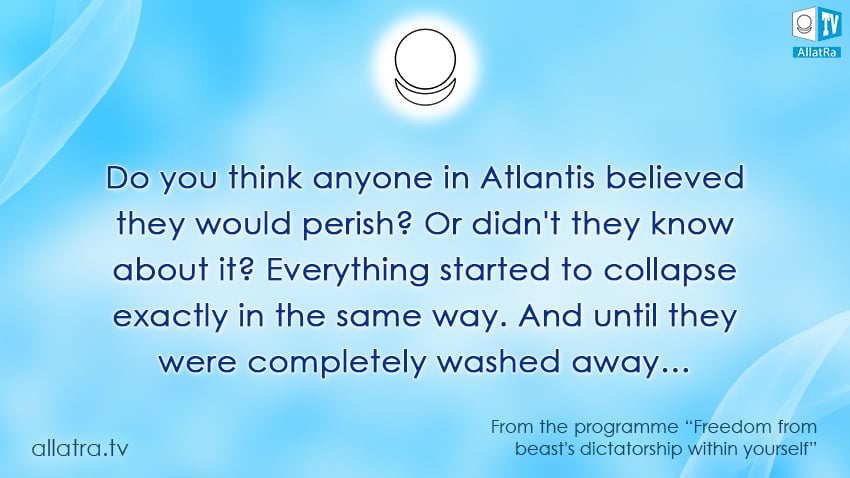 However, some, having preserved the Knowledge, tried to hide. Well, that's okay. They survived, conveyed the Knowledge from those times to Sumer, you see, and until now it dictates. "Atlantis" is an interesting video, it makes people think, it’s for the smart ones.

Tatiana: Very many people are also stressed and worried about how they can feel Life inside, freedom within themselves. How? Can we?

Igor Mikhailovich: You see, if we sit, worry and think about how we can do this, we won’t do this. Just imagine, a baby was born and is lying in his bed. And it starts thinking, “How will I walk? Well, after all, I can fall, stumble over something.” And this way 10 years, 20 years, 50 years pass, while he’s still lying and thinking. Then he dies, they’ve carried him away and buried – and that’s it, that’s how everything has ended. But, thank God, his brain has no time to develop to such an extent that he would start thinking like this. He just stands up and runs. So, be like children: stand up and go. That’s the understanding. And don’t think, “how can I do this…” A simple example, the simple button we’ve talked about is attention. Consciousness says, “How is it?” But why would I talk to a dog about this at all, when this relates to the issues of Life. Well, isn’t it so? 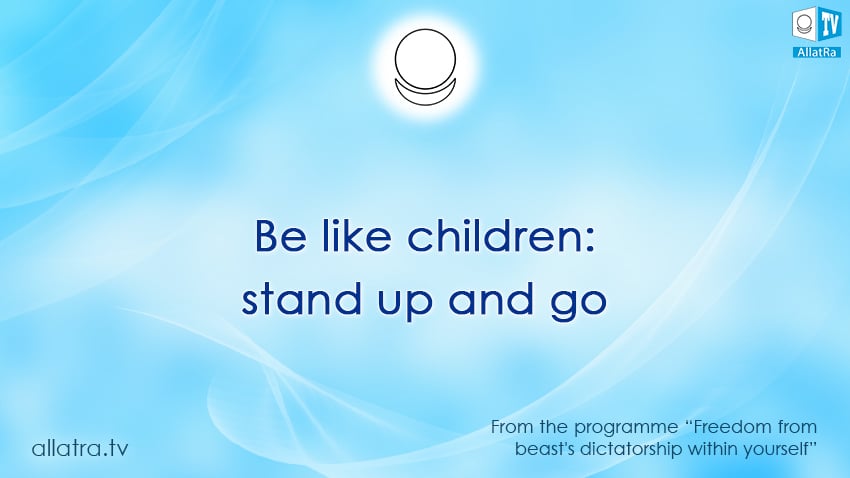 Tatiana: It is. After all, when, for instance, I don’t know, a house is burning, a person doesn’t even think whether he can run or cannot run from the burning house, right?

Igor Mikhailovich: He just jumps out, and the faster the better.

Zhanna: The instinct of self-preservation: do it faster!

Tatiana: Such a focus on the goal.

Igor Mikhailovich: Correct. And here one should sometimes follow the example even of an animal. And one should even follow the example of one’s own dog on how it will save its body and its life, jumping out of a burning house. Just in the same way you should jump aside from the dictatorship of consciousness.

Previous article "What are the most important steps on the spiritual path?"
<-- Part 10 -->
Next article "How to stop negative thoughts and start feeling Love and positivity"

Watch the programme with English subtitles by the link.