CLIMATE. THE FUTURE IS NOW (Transcripts of the video)
Articles
Main

Transcripts of the video “CLIMATE. THE FUTURE IS NOW” with the participation of Igor Mikhailovich Danilov. Part 8.

Previous article: "Pyramids around the world: what were they built for and how to activate them?" Part 7.

What is despair and depression — how to gain freedom?

T: It’s just that, you know, another point that has interested me is that a great number of people across the world today are describing some strange noises on the planet. And, certainly, mass media want both to erase this information and to provide some false records. People just notice that in all parts of the planet, in some places there is a grating sound, in some places there’s a “whole brass band”, in some places…

IM: Well, these are peculiar sounds. And again, they are caused by certain processes. But this has been known long ago, and the ancients wrote about it, that when it happens…

T: The Angel will begin to trumpet.

IM: Well, we can say so, too. These are just signs, nothing more.

T: It’s just that even in the context of how this affects people’s both physiological and psychological state, one understands how important it is even in this respect for people to realise how to avoid these processes, which are inside them, and which cause despair, that it is exactly the spiritual that's so important…

IM: But again, why does despair arise in a person? Because he lives by consciousness. That very despair, that very aggression and all the rest are an integral part of the work of our consciousness. Who benefits from this? A human? No. Then who benefits?

T: The system. Ignorance and… (IM: Absolutely right) total imposition of some feeling of doom.

IM: But a person actually can, and he’s obliged to actively resist the system itself. Can that very depression arise in a spiritually free person? Depression is nothing but manifestation of selfishness, based on despondency, well, something like that.

But if this selfishness isn’t present in a person at all, if he lives by other values, spiritual ones, by what is really important, well… how, how can it actually arise in him? And how can he have despondency from the system, you see? Well, this is again manipulation. 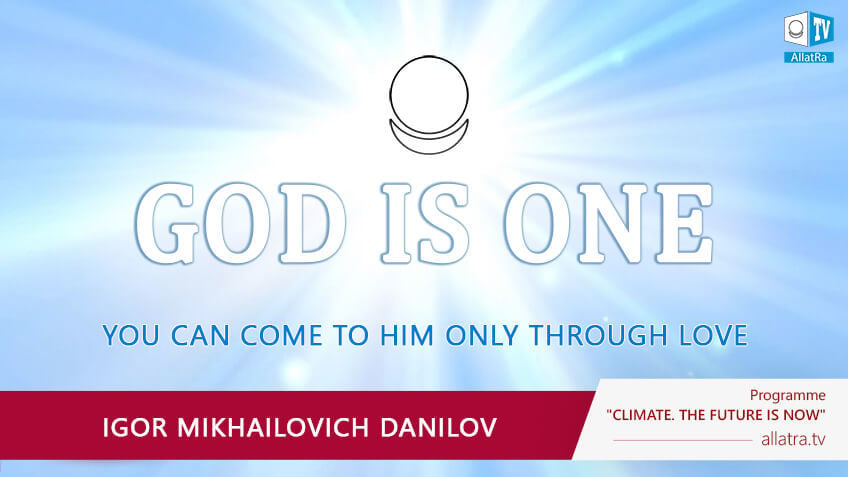 Joy is a constant component of Life and cannot end

T: And also, well, how cunningly it leads a person away from what is his natural state, his constant state – that’s the state of happiness and joy. After all, nowadays people believe…

IM: It’s a natural state, you are right.

T: Yes. The fact that people nowadays believe that joy is some accidental state.

IM: Well, indeed, what kind of joy do people have nowadays? A person has found money, got some profit, something else, succeeded in something – and this is “joy”. Joy – it cannot end. Joy is a constant component, it’s a natural component.

But if it’s transient, then, pardon me, it’s a trite emotion, a temporary emotion. It’s already the domain of consciousness, nothing more, when good pictures  are replaced with bad pictures, and so on. Well, good ones are rarely shown, while bad ones are frequent. 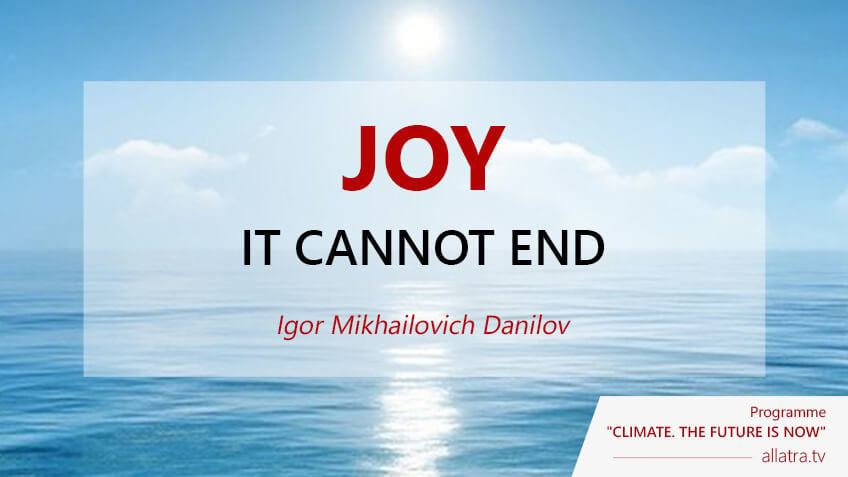 T: So, every time a person is in a state of joy, does it mean that he’s in the state of his nature and of the Holy Spirit?

IM: No, not every time, again, it depends on… well, the understanding of "joy" is perceived by people in different ways. If a person doesn’t know what spiritual Life is, then, naturally, it all passes for him… “joy” is something momentary, based on selfishness and everything else. Isn’t it so?

Well, these are different things, completely different, radically opposite. Love, happiness, and joy, which emanate from the Spiritual World, what a human being experiences as a Personality… he doesn't care what will happen to this consciousness and body. Well, isn’t that so? 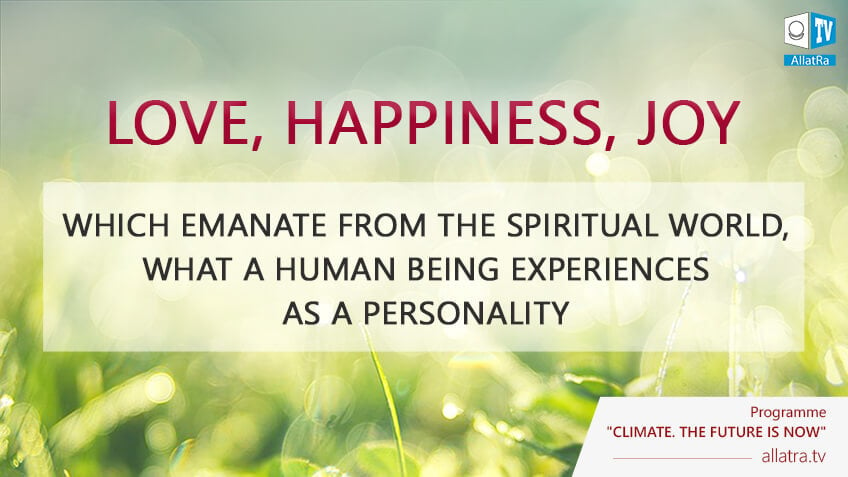 IM: But when a person is under control of the system, when he is truly a slave of satan, then manipulation from consciousness takes place. In reality, it's the imposed programs in his head that are dictating to him, and the person perceives them as his own. They tell him, “The whole world doesn’t love you. You're such a poor little thing.” And the person is lying there, complaining and whining, and just wasting doctors' time with his nonsense.

While in fact it’s enough to do what? It’s enough to simply tell all this to go away – these thoughts along with this dictator in his head. To actually start Living to the fullest, just like a human is supposed to live, then everything falls into its place. And neither health problems bother him, nor problems at work, or problems with anything else in the world. And everything gets better, everything… 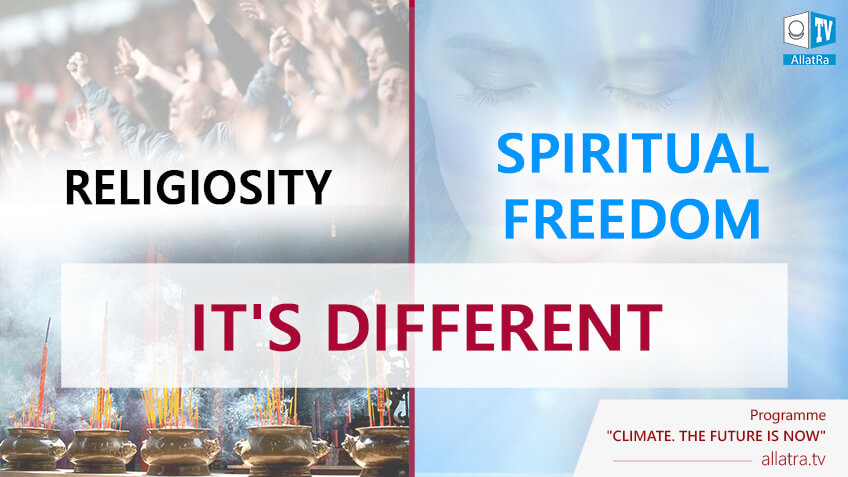 How to gain Spiritual freedom?

IM: He will never get cleansed. If a person starts talking in such terms, “When I get cleansed, or when I gain Life…”, he will never gain it, because it’s satan in his head that speaks for him. One should act, not plan. It’s the system that plans. (T: As if consciousness erases…) Angel doesn’t plan, Angel strives.

If a bird planned every flap of its wing, it wouldn’t fly anywhere, it wouldn’t even take off. This comes from the inside. If it needs to fly, it just flies. Here is a simple example: try to run while thinking about each step – how to place your foot, how your muscle should work. Will you run? Of course, not. 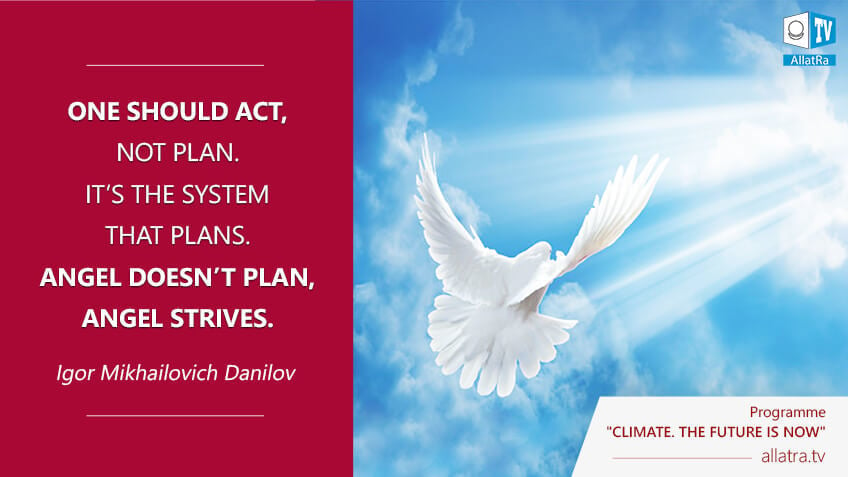 T: Consciousness simply wanted to control each step, right, and by interfering…

IM: Yes, of course. By assisting, it actually closes this path, creating such mindsets as, “When I attain spirituality...” You can attain a clerical rank, but not spirituality. And that's the point.

T: Yes. And the other side of that fact, “well, you’ll never get rid of negativity” (in a sense that it’s a part of duality, right, of your dual nature), that “you can attain Life even when, say, this negativity is somewhere in the background, something there…

IM: No, this can’t be… "You’ll never get rid of" – it’s again the dictation of the system. And in this case, it speaks about itself.

IM: Consciousness will never attain Life. It’s merely a program, and a program cannot Live. It exists. Life and existence are different things.

Therefore, on the one hand, it doesn’t lie when it speaks of itself, but it’s bad when it imposes this on the Angel inside a person, when a Personality perceives this as its own. That's when a Personality becomes a part of what? Of the inevitably dead system, and it gets what it deserves. Everything is fair and honest. 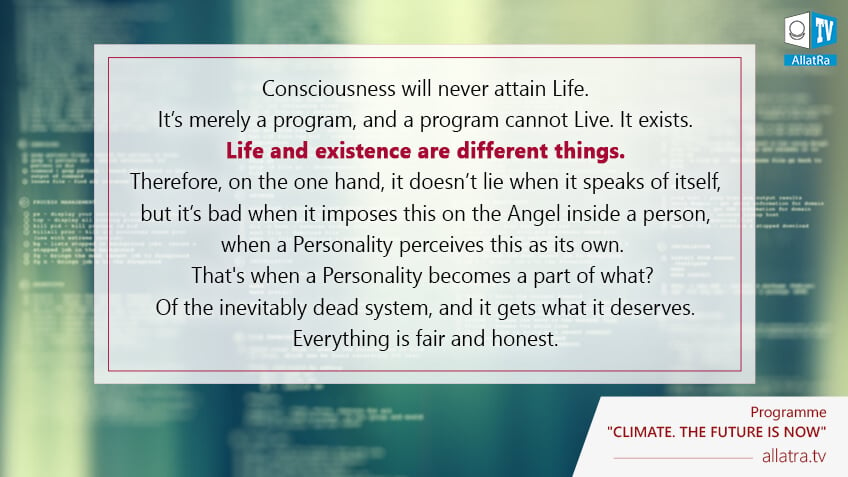 Next article: "Value of Life is far above anything earthly" Part 9.