The Covert Action of Thoughts 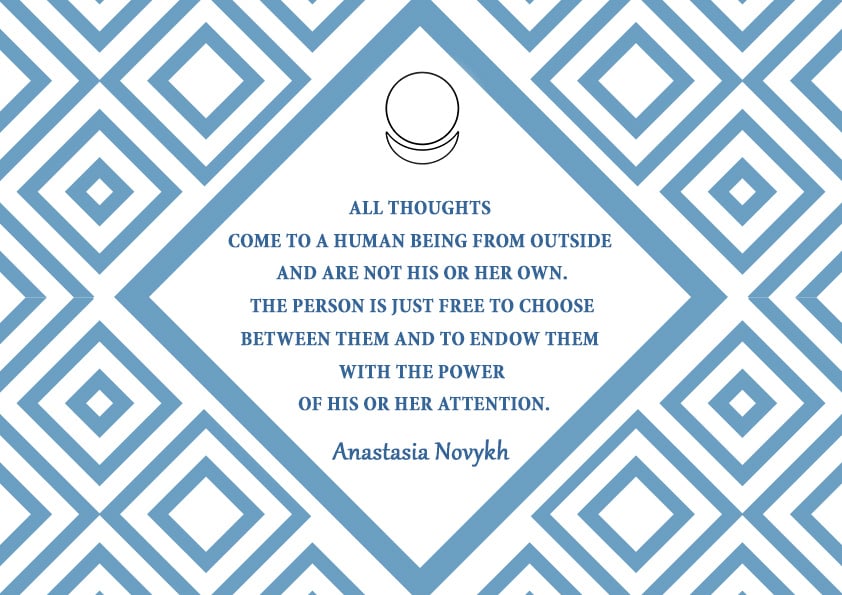 A lot of problems occur because people still cannot identify the source of the origin of their thoughts in themselves, cannot distinguish the conductors of whose will they are at one or another moment. Although it is very easy to do this if you have a Knowledge base, and if you really want to become better spiritually. The main mistake is that a human being naïvely believes that all thoughts are “his or her own” and doesn’t even bother to understand his or her nature. He usually says, “I think so”, “I am ashamed of my thoughts”, “these are my thoughts”, “that's my idea”. But as a matter of fact, if one monitors this process carefully, all thoughts come to a human being from outside and are not his or her own. The person is just free to choose between them and to endow them with the power of his or her attention. For the time being, people don’t have a habit of saying and thinking, “a thought has come to me, it is obviously from the Animal nature” or “I believe that the thought which has just come is of a spiritual nature”. It's a pity though, because such form of communication would prevent an onset of many conflict situations between people and would make their life better in the spiritual aspect.

Many times, while having an ordinary conversation with people, I encountered a manifestation of duality of human nature. A person is externally trying to say something good about himself, about his work, to express a positive attitude towards me, or to admire the knowledge given in the books. But what is he thinking about meanwhile? During the conversation, the Animal nature stereotypically holds the person’s attention and, unhampered, habitually switches him from thoughts “about himself” to thoughts “about his conversation partner in constant comparison with himself”. The person doesn’t even monitor which thoughts in particular attack him in waves one after another. 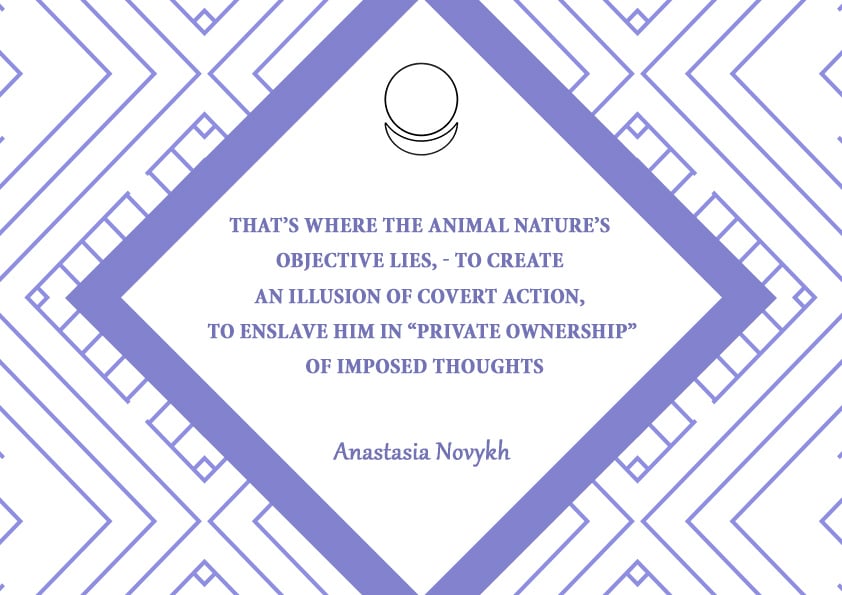 Because behind the cloak of the Animal nature they all seem to him to be “his own”. But what is happening inside him in actual fact? Thoughts, when the person's attention is focused on them, create a whole surge of emotions which are again looped on similar thoughts. At that moment, the person is getting filled either with a sense of envy, jealousy, egoism, and sometimes even of hatred or anger, or of constant comparison, evaluation of himself as opposed to me. And, unfortunately, the person`s attention is focused precisely on this very “secret” attack of human pridefulness during the conversation. That's why everything that is the most valuable which relates to his Spiritual nature is passing by unheard and unnoticed, because the person, by his own choice, kept his attention on the Animal nature. He just wanted to think that way. The funniest thing is that the person believes that he is the only one who is aware of these secret thoughts. Well, that’s where the Animal nature’s objective lies, - to create an illusion of covert action, to enslave him in “private ownership” of imposed thoughts. For the Animal nature, this is the easiest way to seize the Personality`s attention and to manipulate it by means of commonplace patterns.

If a person starts observing himself, he will uncover a cyclic replay of one and the same group of particularly obsessive thoughts, as a rule the stereotypical thoughts from the Animal nature, which capture the person’s attention, causing negative emotions inside him and making him experience them again and again. The most interesting thing is that everyone has such patterns, although the Animal nature embellishes them with “purely individual thoughts”. It is interesting that after such a conversation, a person cannot remember what the conversation partner was talking about. Because out of the entire conversation, his Animal nature, which was holding the person’s attention in hand, now provides him only with the thoughts he “was thinking about himself” during the conversation or scraps of phrases that were pleasing his megalomania. All this wouldn’t be so sad if this stereotypical trick of the Animal nature didn’t accompany the person throughout his conscious life. But control of “one’s own thoughts” by the Personality changes the situation radically! 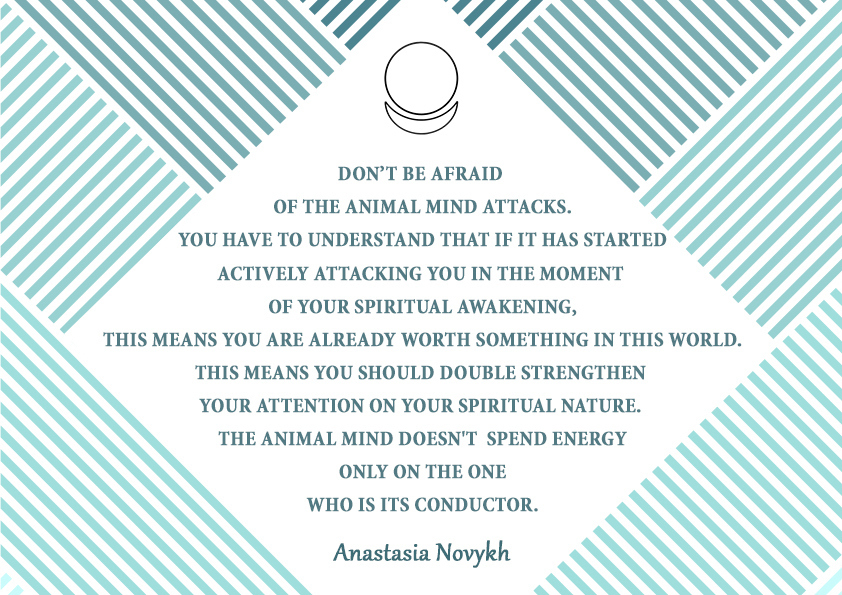 I’ve met people who are already working on themselves. These are those few who are sincere in their words and really pure in their thoughts and intentions, without evident manifestation of their dual nature, who laugh at their Animal nature, constantly control it in themselves, and don’t yield to its tricks and ploys. The work of such people on themselves is evident, and this doesn`t need any extra words. Their faith which was once weak is turning into firm Knowledge thanks to formation of inner spiritual support, and this makes them strong on the spiritual path. The fact that a person begins to detect manifestation of his Animal nature, to distinguish it from his Spiritual nature – it is already a good thing. Sooner or later, these steps of spiritual self-transformation will lead to a considerable outcome in the spiritual sense. To help these people, I would like to say: don’t be afraid of the Animal Mind attacks. You have to understand that if it has started actively attacking you in the moment of your spiritual awakening, this means you are already worth something in this world. This means you should double strengthen your attention on your Spiritual nature. The Animal Mind doesn't  spend energy only on the one who is its conductor.

“The human being is dual by nature. The human mind can easily shift from one extreme to another, thus creating chaos and instability. The outer is just a reﬂection of the inner.”

“After all, a thought cannot be seen. It cannot be weighed or touched, but it does exist since it has appeared in our consciousness. The thought has a volume (at least, in terms of information). It is transient in its existence because it is quickly followed by other thoughts. The thought has no mass, but it can have enormous consequences in the material world. In reality, it is Nothing.”