What does freedom mean?

Transcripts of the video "Freedom from Beast’s Dictatorship within Yourself". Part 2.

Zhanna: Those people who came into contact with the answers that you give, with the answers that really concern most people today. To admit honestly, after all, this Knowledge that you give, everyone is interested in it today. Because when a person is left alone, when a person simply, well... doesn't know the answer to what worries him. Really, all these barriers… And the topic of today's programme, it is also not chosen by chance, that it is Freedom. What does Freedom mean?

Igor Mikhailovich: This is a good question. And what does freedom mean?

Tatiana: Well, how differently a person who’s under the influence of consciousness interprets the concept of freedom, and how exactly the Personality… 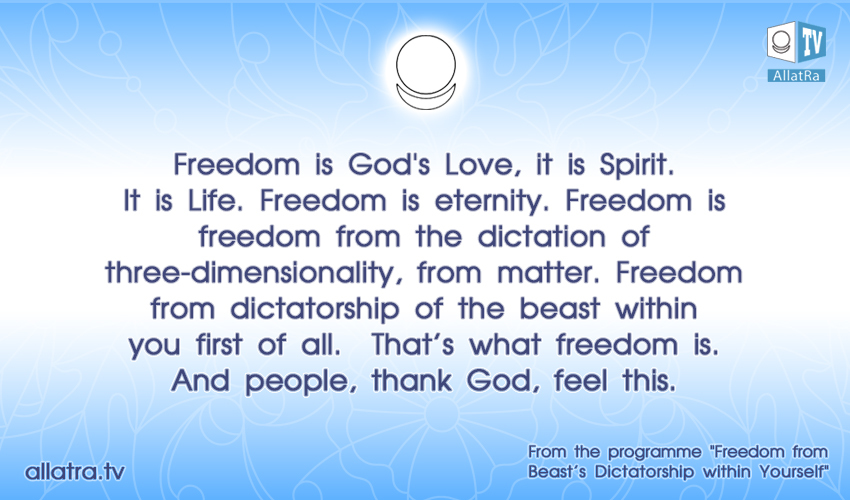 But there is another understanding of freedom. Freedom which is dictated by the beast. For it, power is freedom: the more power it possesses, the higher degree of freedom it has. Well, the system thinks so. Not even the system, the beast inside us thinks so, meaning, our animal part, yes, the material part with its consciousness and everything else. And every person, as you say, when he is alone, when especially, let’s say, a person faces some problems in life or, just being in peace, he starts to reason, “And who am I? Who is a human being in fact?” And when he thinks about himself, why he is here, then even an internal discord arises in him, and most often, if a person comes into contact with something spiritual within himself, with something bright, he starts to experience fear. And whose fear does he experience? Fear is coming exactly from consciousness. Here, who doesn’t let the person to true freedom?

Consciousness doesn’t let the person to true freedom. Who are you

Zhanna: And why doesn’t he see it?

Igor Mikhailovich: Because this is also a part of the person himself. We have already talked about this and more than once. After all, our consciousness is nothing but what stands before our Personality. It is exactly consciousness that has contact with three-dimensionality. If there’s no consciousness, we won’t see three- dimensionality, we won’t see each other, we won’t be able to contact each other in the same way as here. Meaning, at a simple verbal level we see each other, we see our volume, our location in space. But all this will disappear, all three-dimensionality will disappear. However, perception through feelings, precisely as a Personality, it must be developed and nurtured.

If we take a child who would be raised among animals, he will grow up and he will be an animal. His Personality won’t be developed. He won’t even be able to develop his consciousness properly in the future, that is, he will never become a human if during the first period (the period of formation) he was developing as an animal. Why? Because it is exactly the pack of animals that will dictate its own way of life, and his consciousness will be formed on the common egregore of the pack itself.

Well, unfortunately, this has already happened more than once, and this is confirmed. But what does this evidence? The fact that our consciousness requires constant development. But so does our Personality, it also requires constant development. Whereas consciousness says the opposite, it says, “Human Personality or that inside, which comes from God, it must first of all: know everything, simply know everything and about everything. It must be developed, it must be perfect, because God cannot be imperfect.”

A simple question, “A person is created in the image and likeness, right? So he immediately should be what?”

Igor Mikhailovich: Be born with a beard and sitting in a chair. 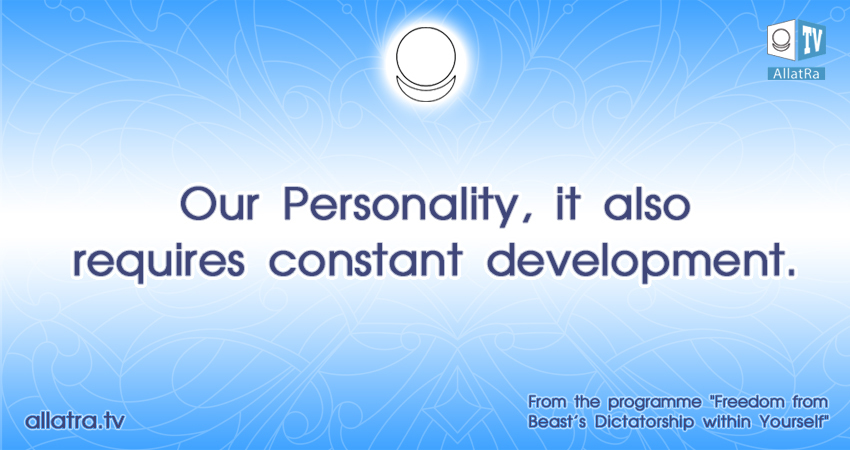 Igor Mikhailovich: Well, isn’t it so? And everything should be happening at a snap, even flies should fall. That's how it is shown in the ATLANTIS video, when the "god" was bored. Well, isn't it so?

Igor Mikhailovich: Of course. So, it turns out that consciousness is nothing but a deceitful creature. It imposes one thing and hides another.

But when a person is working, when he is observing it, and simply, let’s say, driving this beast into a corner (not the beast drives the Angel, but the Angel drives the beast), everything falls into place.

And then the person gains freedom - freedom from dictatorship of his own beast-like part, yes, it means from its domination. But in order to learn it, one needs to spend much efforts, time, and really has to work on it. 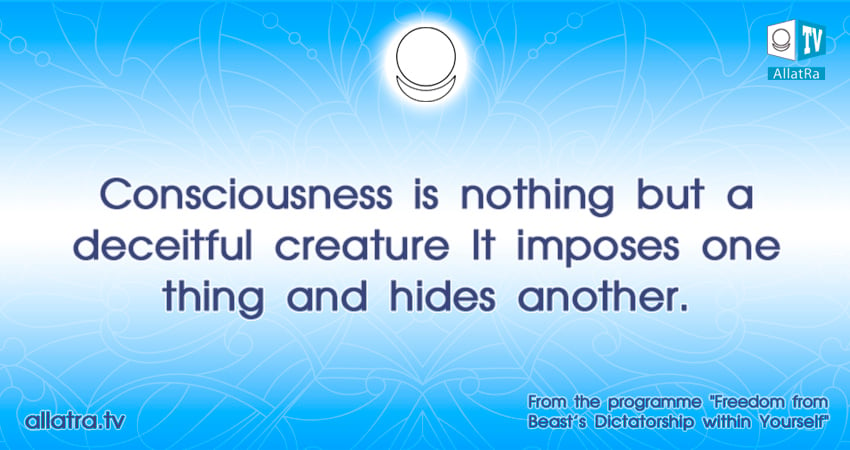 Well, here I’d like to raise another point that there are two ways. There is a spiritual path, let’s say, for laypeople, as it is said in religion. Right? And there is for those who steps on the path of service. These are different things, after all. Absolutely.

The Service to the Spiritual World

Tatiana: There are very many questions in this regard, how to distinguish, well, like how to serve…

Igor Mikhailovich: Well, indeed, this is… These are different things. Service requires discipline, dedication. In this case a person clearly understands that he can do a lot for the Spiritual world, and he, let’s say, cares not about himself, not about his own stay here, but he cares about the greater, he cares about people. And it’s natural that his care should come from his own spiritual self-development and should be (Zhanna: Maximally useful), let’s say, maximally useful for the Spiritual World, of course, and for people as for spiritual beings, as for future Angels, but not like, say, for members of an animal pack.

Tatiana: It turns out to be an interesting moment, even if we return to the impulse of the people who participated in THE UNIVERSAL GRAIN project. It turns out that this small victory of each person over that beast within oneself, overcoming, little overcoming, they just have lit up by the interest and have decided to study, by overcoming consciousness, which was talking and stopping, and was saying that there was no need to do it, that it wasn’t relevant…

Zhanna: That I won't be able to, that I will fail.

Tatiana: Yes, that it won't work.

Tatiana: That this is totally hopeless. Having overcome consciousness within oneself, when Personality comes to the foreground… 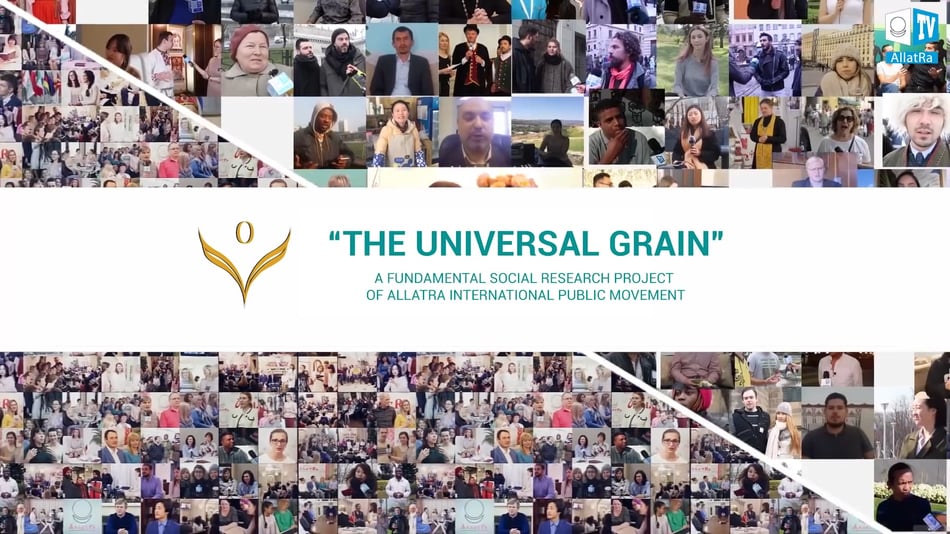 Igor Mikhailovich: Because this is Alive.

Igor Mikhailovich: Why? Because it resounds exactly with their inner state, it resounds with the inner Angel in a person, with his or her Angelic essence. And if we look, what kind of people indeed revealed themselves, and how they were revealing themselves. After all, they were revealing themselves in the pure, from the soul, they talked about it. Why? Because it is a constituent of every person.

Zhanna: In the common to all mankind.

Igor Mikhailovich: In the aspect common to all mankind, of course.

Zhanna: In the real.

Tatiana: They didn’t even understand how their work on themselves and this very little victory of theirs within themselves, what kind of mechanism it launches on the global scale.

Zhanna: And a resonance.

Tatiana: Yes, and a resonance.

Igor Mikhailovich: This is also a part of service.

Igor Mikhailovich: Yes, a fear to talk about the Soul. 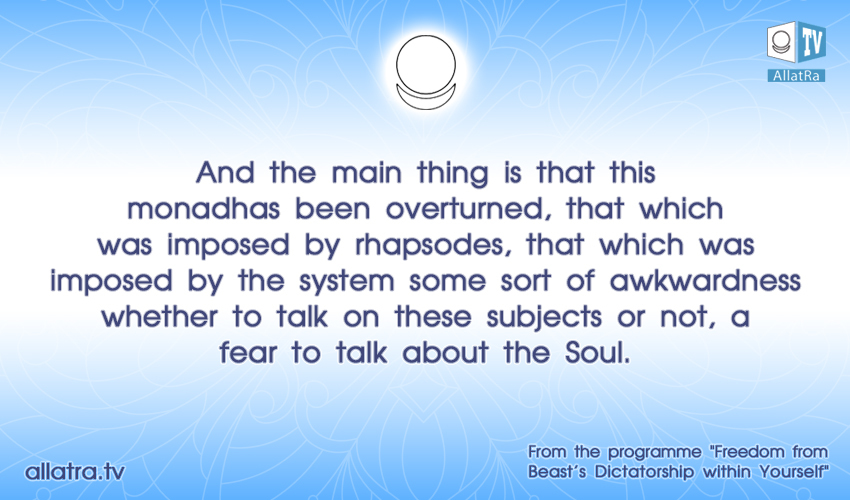 Tatiana: Now one just wants to talk, one wants to continue, to respond to this very surge and…

Igor Mikhailovich: Right, because that, which for a long time, let’s say, has been oppressed and considered already forgotten, well, sort of vestige of the past, it proves to be predominating in people. And it turns out that it is very precious and dear to everyone across the world, to all people. And no matter how the system was trying, it has failed to kill this. And it is joyful that people are awakening, that they really feel, and they are aspiring. And the best and most wonderful thing is that they are not afraid to talk about this. This is freedom.

Zhanna: And they show example to other people who are sitting and are afraid. 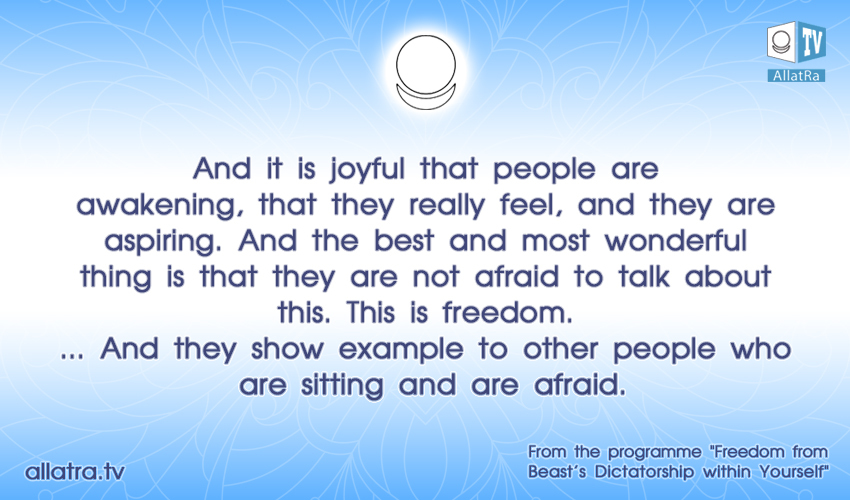 Previous article "What is True Love? Why people are ashamed to speak about God?"
<-- Part 2 (pages 5-8) -->
Next article "How to be happy - simple technique to find personality"