What is satan in fact? Become an Angel inside yourself

Transcripts of the video "Freedom from Beast’s Dictatorship within Yourself". Part 4.

Where do thoughts come from?

Zhanna: Here I’d like to add that those people who understand that they shouldn’t think about bad things, yet many of them don’t notice when they switch to this very point when…

Igor Mikhailovich: Yes, this is another problem. When a substitution (Zh: Yes, yes, when…) takes place, right? For instance, a person thinks about good things, he forces his consciousness to think of good things, he avoids bad thoughts. And suddenly, say, he has dropped something, stooped down, picked it up – he’s got distracted, and a thought already comes, “It has fallen, it could have got broken…”, and sorrow emerges. And there’s immediately a subsequent thought that a neighbour is scoundrel, right? And, say, why he… I’ve borrowed his drill for 5 minutes, and I’m not giving it back for a month, while he, the scoundrel, doesn’t even want to greet me. Well, here you are.

Zhanna: And here you have answered a very disturbing question. In due time this also helped me a lot. Regarding the fact that very often people ask a question, “Well, what kind of thoughts come from the animal nature, yes, from consciousness, and which thoughts are right, good and aimed at…?”

Igor Mikhailovich: There are no good thoughts.

Satan is real. What is satan

Igor Mikhailovich: This is for everyone to have an understanding: thoughts don’t come from the Spiritual World. This is true. All thoughts in your head, which you feel and experience, all this is satan’s dictatorship.

Satan can tell you about God. Again, what is satan? In religious understanding, it is someone, well, with horns and ears. Yet, what is satan in fact? Satan is programs, it is information. Your consciousness is a part of the program. We have talked a lot about this, but it’s to simplify understanding. Here, the girls have tablets, right? There are programs which draw everything. If we look at the programs written in them, there are zeros and ones. But they see numbers, they see pictures. However, those consist of zeros and ones. This is how the system itself operates, this is how our consciousness, which is a part of the system, works. 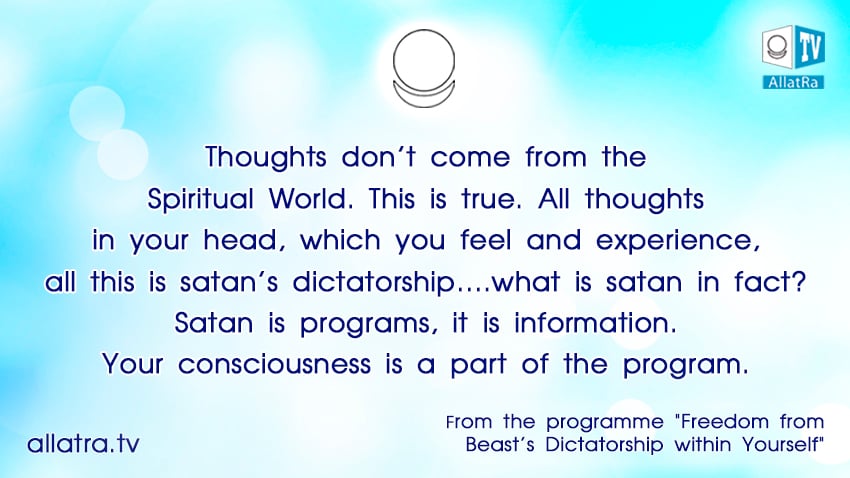 Igor Mikhailovich: Yes, just a written code, but it is spoiling our life. That’s the purpose of this code. It must hold the tail and hold tightly everyone who isn’t worthy of the Lord’s World. And everyone who’s unworthy of It, who cannot step over, who gets tempted by everything earthly and mortal, he dooms himself to what? To suffering, to death. But what a human being has the right to? To Life. And they say, “It’s unfair.” How can it be unfair? All wars begin under dictation of consciousness. All spite that is coming, all greed, all envy, all human meanness – all this, guys, is your consciousness. And everything starts there. But it starts because you finance it, you choose it. And you yield to these temptations, and you act and do everything yourselves. Is it God who did this? Is it God who told a person, “Kill another person”? Is it God who said, “Spit on your friend’s back, deceive, steal”? Is it God who criticises the other fellow within you? No. Is it God who's telling you that you are worthless, that you can do nothing and you are capable of nothing? Well, isn’t that so? All this is consciousness. Any thought is consciousness, any judgement is consciousness. 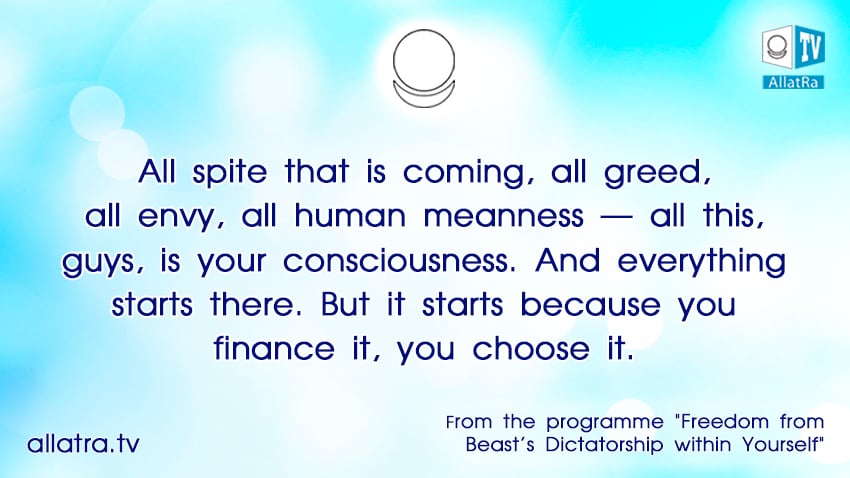 Igor Mikhailovich: Say, a question sounds, “Then how, if all this is consciousness and a part of this? Then what is Angel?” An Angel is precisely the one who feels. It is the Angel who perceives this world under dictation of consciousness. He doesn’t see it, but he feels. And the inner component, the feeling part is exactly what many people in THE UNIVERSAL GRAIN video were talking about, yes. It is that inner… Perception through feelings, it is perceived holistically and differently, not as through consciousness. But it is very simple to find and liberate this Angel, and it is very simple to realise that you are, pardon me, a Personality, but not a part of the program of these written zeros and ones. 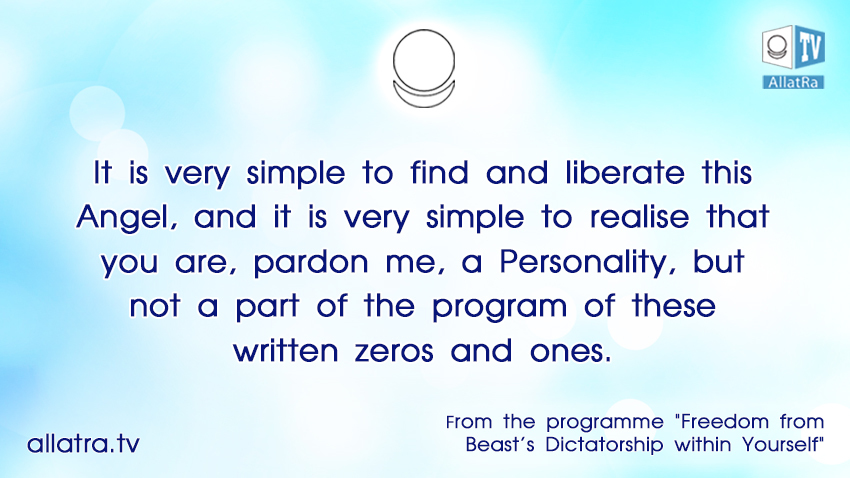 This means to start forbidding your consciousness to impose on you what you don’t need, to impose system directives, that is, bad thoughts, bad deeds, and everything evil. And once you start falling asleep happily, you’ll be waking up happily, too. In the beginning, of course, as many people know from their experience, as they are telling, yes: they hold on in the daytime, but at night thoughts come, which dictate. Well, it’s just in the beginning. When a person intensifies his work on himself, then what happens at night as well?

Zhanna: If something predominates in him, this is exactly what happens.

Igor Mikhailovich: Perfectly true. That is, even at night…

Zhanna: He goes to God.

It is beneficial for consciousness that a human goes to hell

Igor Mikhailovich: …he goes to God, and no one can overpower. Because it’s in fact very simple – to avoid a program. The only necessary thing is what? To make a bit of effort. But that is exactly the point. If a person doesn’t make efforts, if he doesn’t feel… Whereas everyone can feel, only afterwards, deadening and rejecting in oneself everything Divine. Why does he reject? Because consciousness dictates. It is beneficial for consciousness that a human becomes a subpersonality, or speaking in religious terms, that he goes to hell. Why? Because consciousness continues to exist with him, the program continues working. While the program self-identifies, we have already talked about this more than once, it perceives itself as “I”, that’s why a person has multiple “I”. 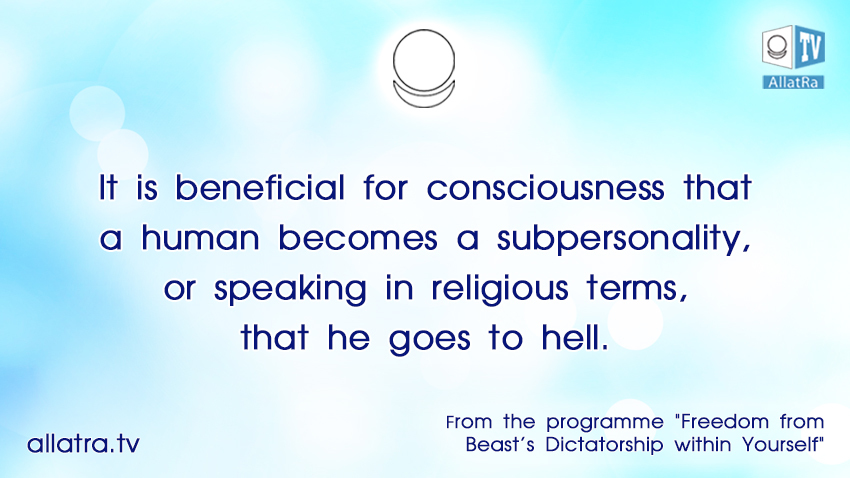 Well, everything is very simple in fact. And it turns out that it’s beneficial for consciousness that a human becomes a subpersonality, while for a Personality this is death. It’s not beneficial. This is constant slavery, you are constantly being used.

Become an Angel inside yourself

Igor Mikhailovich: But many people may say, “Why don’t I feel myself as a Personality?” But you do feel yourself as a Personality, that’s the trouble. Everyone can feel oneself. This oppression, this inner suffering, it is you as a Personality who feels this. Whereas all your avarice, all your anger and everything negative that you’ve accumulated – that is what consciousness is. And many people also say, “It is too late to re-educate myself”, even a simple method – to start thinking about what is good. Just make your consciousness think only about good and finance only good things, whereas brush aside everything bad, don’t think about it. They say, “It’s too late to re-educate myself, I have already grown up, I’ve already kind of formed”. Who is speaking at this moment? It is consciousness speaking. While this person is in pridefulness. It seems to him that he is thinking correctly, reprimanding everyone, lecturing – this is a convenient position for consciousness. Whereas in fact, neither age matters, nor anything else matters. 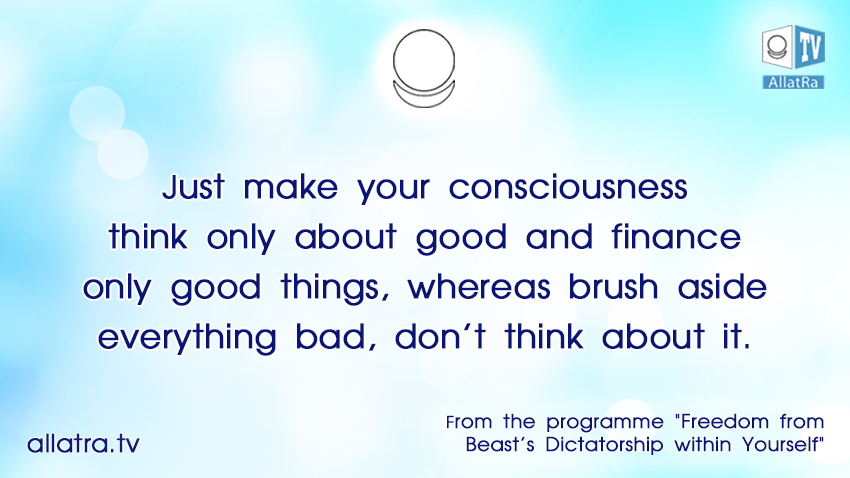 Any person can do it at any time… If you’ve embarked on the path, then stand on it, work every day, all the time. This doesn’t hinder either intellectual activity if you are a researcher, this doesn’t prevent you from working with your hands if you work with your hands, it hinders absolutely nothing. Just hold on and don’t let unnecessary thoughts in. Thoughts should work, meaning, fulfill everything related to work and serve you. That is, first of all, you must become an Angel inside yourself, that is, a master over your beast, while the beast should work for you. 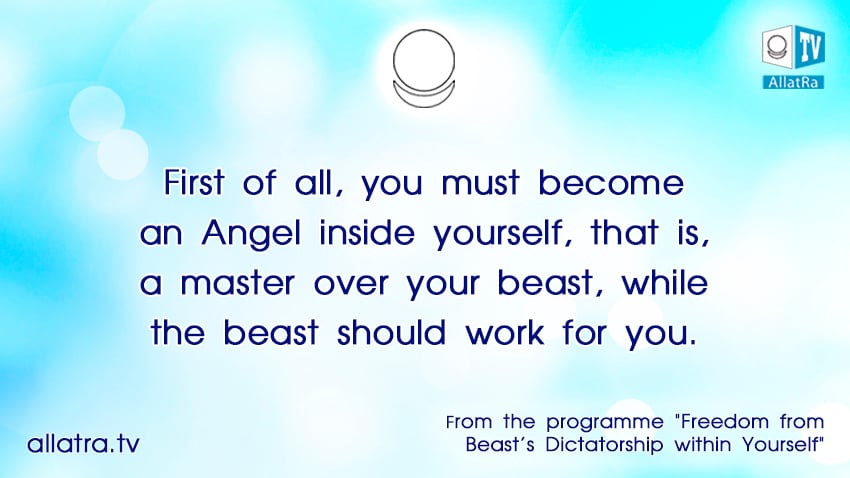 Just imagine, I will give a simple example: you’ve got a dog, and eventually this little dog, let’s say, a Chihuahua (you know, such a little dog with big ears), and eventually it becomes your king, right? By its glance, you run on your toes to get its food. It barely turns around, while you already run and turn over its pillow, or something else. After all, a lot of such things often happen in life.

Consciousness is a part of the system (satan). Its patterns

THE LEADING ROLE PLAYED BY

A HUMAN BEING IS DUAL.

HE OR SHE CONTAINS TWO NATURES:

THE ANIMAL NATURE OF A HUMAN,

THE SPIRITUAL NATURE OF A HUMAN.

WHERE A PERSON INVESTS MORE

THAT’S EXACTLY WHAT HE IS. 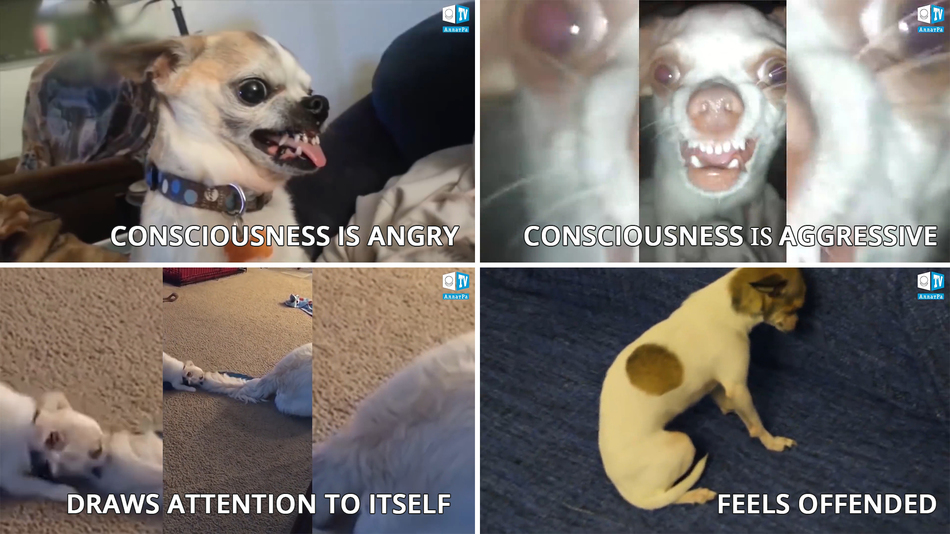 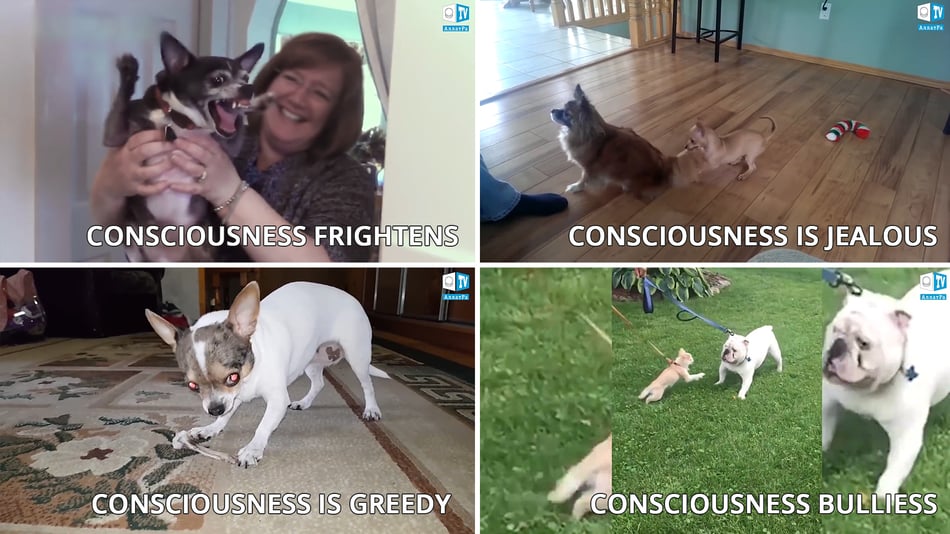 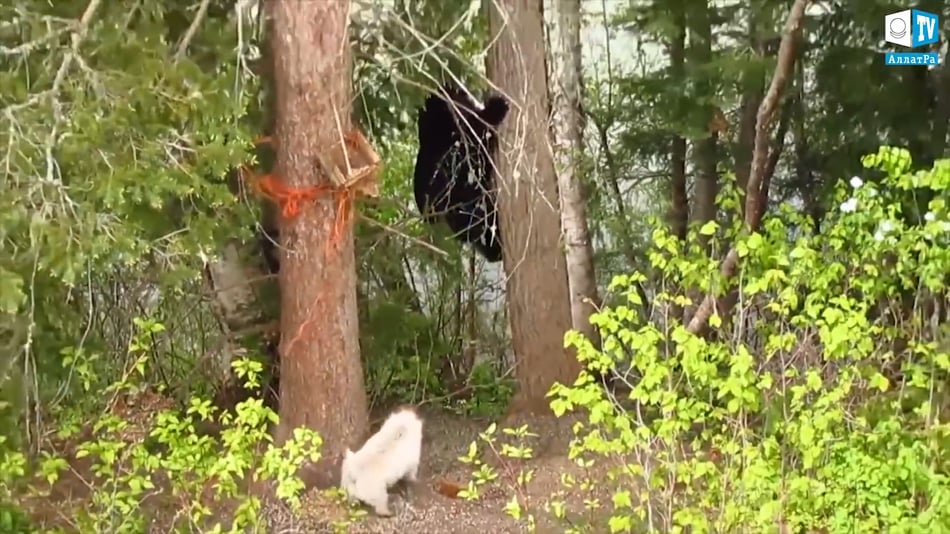 ARE THESE QUALITIES OF CONSCIOUSNESS FAMILIAR TO YOU? 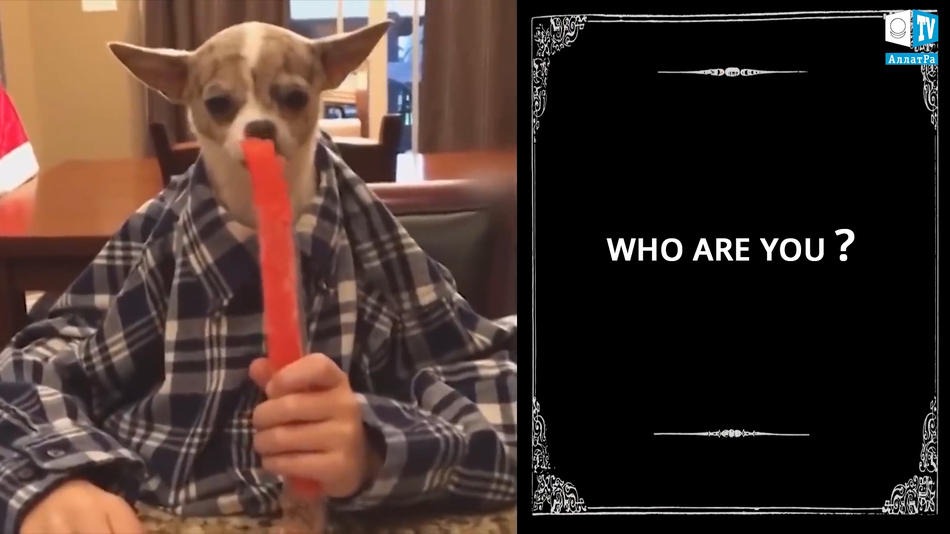