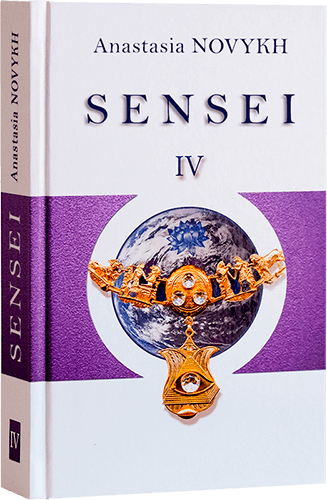 Even though this book is a continuation of a series, it could well be a stand alone book due to the volume and quality of information inputted in it. It is in this book where during a casual conversation with his friends, Sensei shares his deep knowledge about world history, covering the period from ancient Egypt to modern times. It includes a breathtaking story about Imhotep - a person from an ordinary family, who owing to his knowledge and hard work, was able to not only attain a high government position becoming the second person after the pharaoh, but also to reform the government’s administrative system allowing the most talented and highly ethical people to occupy responsible positions. As a result, Egypt  achieved such a high level of development which it wasn’t able to achieve during the following years.

Plus, the book contains a quite detailed story about Archontes (which were mentioned in Sensei of Shambala. Book III) - a small group of people claiming supreme leadership of the world due to their ideology and substantial capital. The book tells the origins of this clan, describes the methods of their destructive work in multiple countries during different times, reveals  secret societies created by them, and those decisive moments in the lives of different countries which were provoked by their assistants. The book gives examples of the most substantial work performed by Archontes. The story of creation of the United States is also covered in this book, including who financed it, how this “most democratic country” was created and for what purpose. It includes information on how the First and the Second World War were financed and who benefited from these global wars. Furthermore, the little-known facts such as the creation of the statue of Liberty, international politics connected to the Suez Canal, large-scale machinations of Archontes in big politics, and the information on when Archontes are planning to start the Third World War are also disclosed in this book. In addition, this book presents information about the life and work of the great scientist Omar Khayyam and the covetous use of his work by Isaac Newton as well as about the life of some famous people who influenced the course of history. Physicists and astronomers can also find a lot of interesting information in this book such as nanotechnologies and space exploration. Moreover, there is a lot of interesting information about mythology of various world’s cultures, and the origins of Christianity, the work of Jesus Christ, Maria Magdalen, Pavel and Peter. The events and myths used by John in his book of Revelation, the work of the Knights Templar and the most impressive information about the mystery and unknown history of the Holy Grail are also covered in this book.