Birds and a Stone Anastasia Novykh 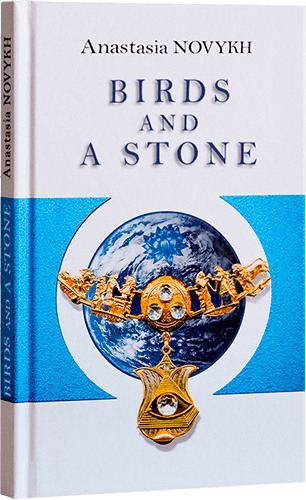 People are like birds and stones. For some, just a hint, a single word is enough to be prompted to the spiritual height. And their awakened essence will soar towards perception of the infinite universe. While others… Well, a stone is merely a stone.

“Prove to God that you are Human, and God will have faith in you” (Rigden Jappo)

If you want to acquire bigger, begin with smaller. The Great Path begins with the first step.  Three worldly stories and wise parables that enrich the reader on their Path, help them find their true self and the meaning of life

Three fascinating stories “Duty,” “Everything is So Simple,” and “Birds and a Stone” are in one way or another connected to the legendary Personality Sensei.

tells a story about one extraordinary day in the life of major Rebrov, who is just an ordinary person burdened by everyday’s troubles but who has high ethics and acts according to his conscience, risking his own life to help other people. On this crucial day, when he was on duty, he experienced a very unusual phenomenon during the time of danger, which helped him save the lives of people as well as his own. And from that time on, he was able to see the world from a completely different perspective...

“Everything is So Simple”

is a story about an old man who was fishing by the river when he was joined by an extraordinary young man. During their conversation, the old man told about his uneasy fate, about the miraculous event that happened to him while he was in a war, and about his life post-war. And because he liked his companion, he told him about his tormenting thoughts and his doubts that he had about himself and the life he lived, which any person reaching an old age would have. And his “random” companion answered to this with a wise, ancient eastern parable...