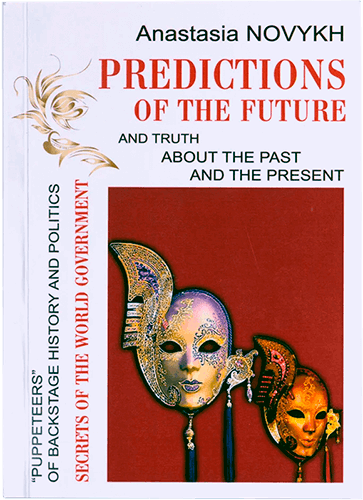 The last events in the world - the world economic crisis and geopolitical changes - lead every person to ponder about the reason for their emergence. When putting together the puzzle from fragments of information trying to figure out what’s happening, one can make a conclusion that behind all these riots and sudden changes, which intervene with the life of almost every person, is some kind of power, certain people who own the majority of world’s capital and whose names are not publicly announced. Yet, they are the real puppeteers of the billionaires. It was them who decided to provoke actions leading to extermination of the largest portion of the population during this difficult period of time for humanity, the period of global climate change on Earth.

What this power is, their plans, the history of their existence as well as their methods and tactics in manipulating the masses - this information is easily accessible in the books by Anastasia Novykh. The written style of the books allows clever people to realize more than what is written, see and compare the scattered information, and find a key to the solution when looking at what’s happening around the world. “The world elite” is just a small group of people compared to the rest of humanity. They can only plan. And realization of their plans depends only on the masses and on the personal choice of every individual. And the choice is made based on the whole information. The future is in the hands of every person!