Guatemala → Volcano Pacaya eruption. Storms in the USA and Vietnam. A rare waterspout in India

Guatemala → Volcano Pacaya eruption. Storms in the USA and Vietnam. A rare waterspout in India Devastating fires in South America and an eruption of volcano Pacaya in Guatemala, ongoing storms in the US and a water-tornado near Mumbai - these are the latest weather abnormalities that are ongoing around the world as fall season arrives. 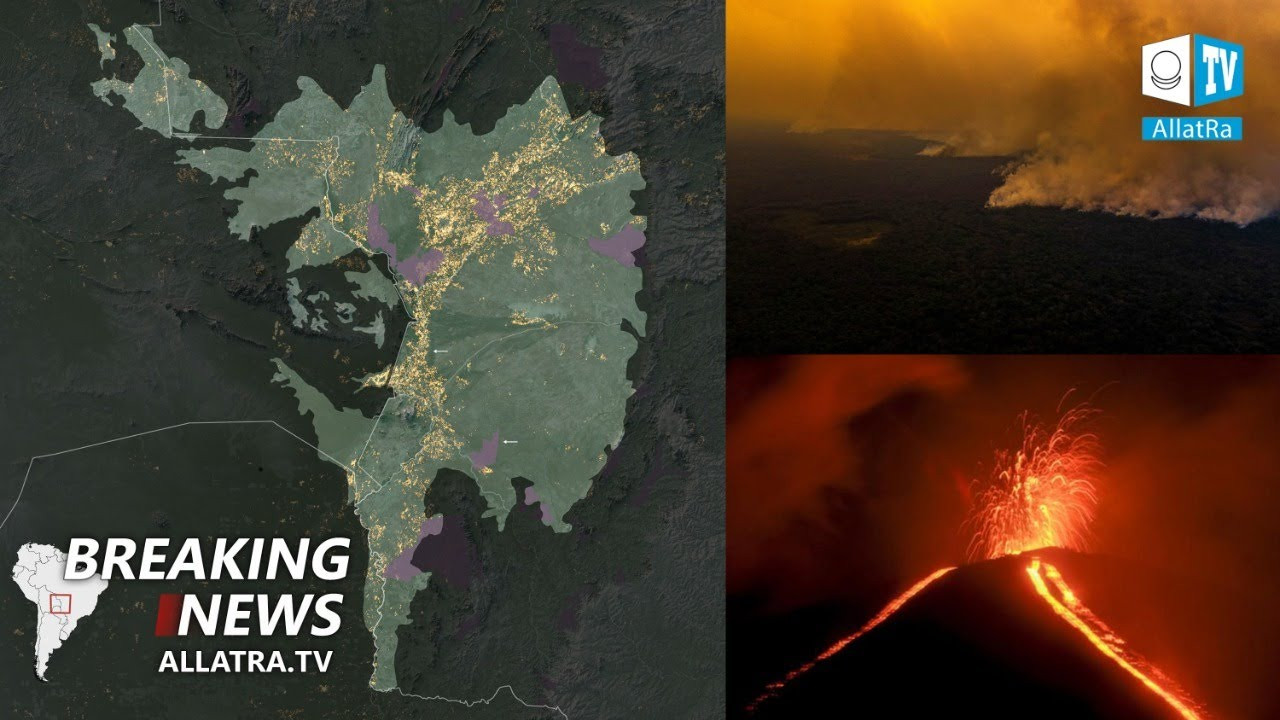 This year, wild fires have been on the front page of all media since January. The main countries affected by it in South America are Bolivia, Brazil, Colombia, Chile, Ecuador, French Guiana, Guyana, Paraguay, Peru, Venezuela and Uruguay. There were several fatalities, evacuees and material damages accounting for millions of dollars. Sergio Federovisky, Argentina's deputy minister of environment, mentioned that the most important cause of fires is climate change, followed by drought. According to his words, "climate change is a forceful reality and the effects of it are already being seen." Of the 23 provinces affected, the most affected is Córdoba, which is suffering from a 6-month drought. So far, 2020 has been the year with the least rainfall in this province since the beginning of records in 1955. “The total affected area is equivalent to approximately 10 times the size of the city of Buenos Aires."

Some mass media, government authorities and foundations report that the cause of these wild fires is global warming caused by carbon dioxide. And carbon dioxide produced by these wild fires only increases the greenhouse effect and accelerates climate change. These news reports alarm the population because they are saying that the main source of oxygen on the planet is burning.

But the lungs of the Earth are the oceans where prochlorococcus, the most abundant photosynthetic species on the planet, is found. This is a marine microbe that has existed for millions of years. And global climate change on Earth is the result of astronomical processes and their cyclicality on which people have little effect. You can find more information about climate change in the videos with the participation of Igor Mikhailovich Danilov.

As cyclical processes are inevitable, it is also not right to urge people to invest their economic resources in trying to prevent them. Our main resource is life. And when we put human life above all else, the rest will come.

From September 30th to October 1st, 2020, large-scale wild fires were recorded in the Voronezh region, and fire extinguishing was complicated by strong winds. An emergency state was introduced in the region.

In Nikolaevka village, 50 buildings were destroyed. People who had lost their homes were evacuated to a nearby village.

The fire also destroyed over 90 hectares of vegetation in other areas.

Such large-scale wild fires were a result of the abnormal drought in the Voronezh region. Approximately 30% of floodplain lakes in the Khopersky Reserve dried out because of that. According to an employee of the Reserve, for the third year now, there has been no flood at all, and in winter there is not so much rainfall to create a flood. According to her observations, there has not been such a drought since 1972-1973.

A similar situation had developed in the Rostov region. The total area of the territory where wild fires occurred was more than 420 hectares. Joint efforts of volunteers and firefighters protected 13 towns from the flames.

Eruption of volcano Pacaya and landslides in Guatemala

On October 6th, 2020, in the Solola department of Guatemala, a destructive landslide developed after heavy rains. Unfortunately, casualties have been reported. As a result of the land subsidence, a huge stone, 3 by 5 meters, fell down on several houses which were completely destroyed and dozens were damaged. Heavy rains in the country also caused floods and washed away some roads.

Two days later, a powerful Pacaya volcano erupted in Guatemala. Emissions of pyroclastic rock up to 250 meters were recorded. And on the northern and eastern slopes, 4 lava streams which travelled down about meters were observed. Residents were prohibited from approaching the area of Pacaya volcano.

Floods in Indonesia and Australia. Tropical storm Linfa in Vietnam, tornado in Mumbai

On October 5th, 2020, off the coast of Mumbai, India, eyewitnesses noticed a water tornado. It is a rare phenomenon, especially near a coast. Water starts to twist during a convective activity, when heat and moisture are transferred from a warmer surface to a cooler zone.

On October 8th, 177 mm of precipitation was north of Darwin, Australia. This is the highest daily level for the city during October since 1941. It was also reported that this year, during the wet season, the level of precipitation in Darwin was 17 times higher than at the same time last year.

Since early October 2020, floods and landslides have affected thousands of people in several provinces of Indonesia. Unfortunately, there have been casualties.

On October 11th and 12th, heavy rains caused flash floods and landslides in Garut, West Java province. Due to the overflow of local rivers, flood waters reached a height of almost 1 m. In total, over 900 houses were flooded resulting in an evacuation of about one thousand families from the affected areas. Heavy rainfall also caused landslides in several other districts.

On October 11th, tropical storm Linfa struck the central provinces of Vietnam. Unfortunately, casualties and missing people have been reported. Almost 50 thousand people were evacuated. In these regions, heavy downpours have been going on for a long time, and the storm brought even more rain. Water level in local rivers has increased significantly. As a result, floods occurred in the central part of the country and on the Tainguin Plateau, which caused great damage. More than 130 thousand houses and over 4 thousand hectares of crops were flooded, roads and bridges were damaged.

Powerful thunderstorm in New-York, storm Delta in the US

On October 9-10th, 2020 Storm Delta struck the southern coast of the USA. The states of Louisiana and Texas were particularly affected. The wind speed reached 160 кm per hour. Over 400 residents were left without electricity. Over 9 thousand residents of Louisiana were forced to move to shelters. Due to multiple damages, the highway between Texas and Louisiana was closed.

Earlier, on October 7th, a powerful storm struck the Capital District of New York, USA. In some places the wind speed reached 112 km per hour. Unfortunately, as a result of the disaster, there were casualties. Houses and power lines were also damaged resulting in a blackout for nearly 200,000 residents.

At the same time, the northeastern and western parts of the USA are seeing the worst drought in the last 7 years as the summer was dry there. Several states have been affected by it. During the summer and autumn months, drought often intensifies there as dome-shaped clusters of warm air prevent rains and divert storm systems from large parts of the country. But this year, the drought has reached an unexpectedly high level.

The climate on the planet is changing - abnormal droughts, large-scale wild fires, flash floods and severe storms. Humans, of course, have influenced the environment to some extent - exhaust fumes and other wastes that pollute the air and water, but these are environmental problems. And even if we solve them, the intensity and magnitude of global climate change on the planet will not be affected. The difference is that environmental problems can be solved, but humanity cannot affect the cyclical astronomical changes. And each person, who has already faced the force of nature, realized that it is impossible to get through the period of cataclysms alone because of the consumerist format of our society. Because we live in a society where we are all divided, where wars are ongoing and material values dominate. There is an urgent need to build a new format of relationships, and people around the world are already implementing a global international project Creative Society on the platform of ALLATRA IPM.

If you have become a witness of fierce weather events and would like to share it with others, or if you would like to join a team of volunteers and help change the world,  please email us at [email protected]