Fires in Colorado, USA. Melting glaciers in Switzerland 2020 | Tropical Storm Nangka → China,Vietnam It is very important to cover the information about the cataclysms, received from eyewitnesses. Anyone who understands the importance of reporting real information about the events can become a reporter of Breaking News on Allatra TV. 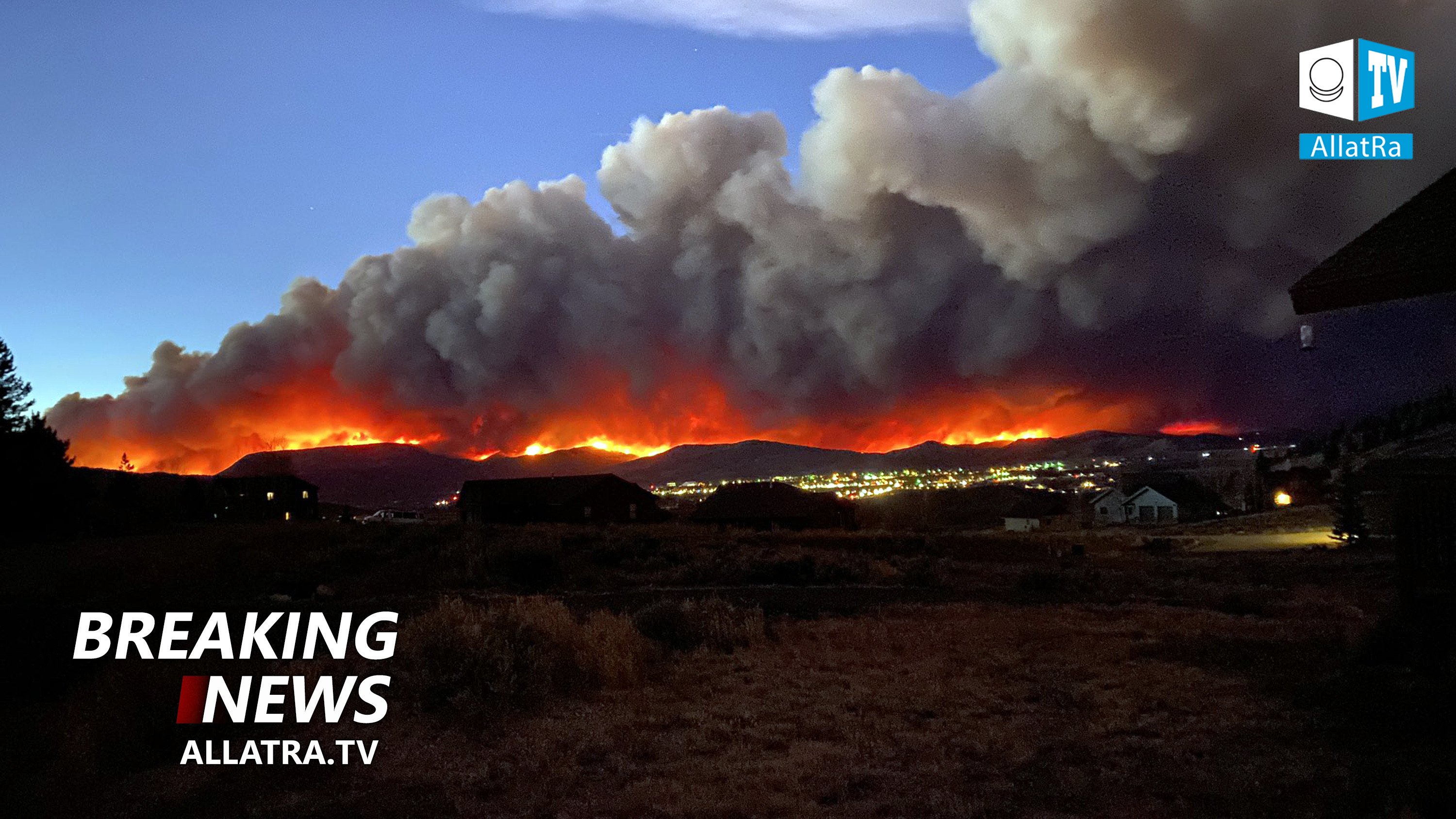 Natural disasters are extremely destructive. In several countries of Southeast Asia, because of the rampant natural forces, people died and tens of thousands of people were forced to leave their homes.

Tropical storm Nangka in China and flooding in India

Since October 13, 2020, heavy downpours in India have set new records for the amount of rainfall in some places causing massive floods.

Casualties have been reported. More than 27 thousand people have been evacuated.

The Indian states of Telangana, Maharashtra and Karnataka were affected.

Meteorologists called these rains rare and atypical, as the seasonal rains usually end in September.

According to Indian Express, on October 14 almost 192 millimeters of precipitation were registered  within 24 hours in Hyderabad. This is more than two monthly norms.

The last time such heavy rains in October were registered  in the city in 1891.

The flow of water just washed away the cars.

Many districts were left without electricity.

On October 14 as a result of the disaster, people were killed and some are missing.

On the island of Hainan, wind speed reached 90 (ninety) km per hour. In Hainan province, flights were cancelled and rail transportation was suspended. Also, a warning was issued about a danger level three rainfall and the typhoon reaching the second level of danger.

Flooding in Cambodia and storm Nangka and landslide in Vietnam

On October 14, storm Nangka reached north-eastern part of Vietnam causing flooding. The situation in the country worsened because locals didn't have time to recover from the consequences of the previous tropical storm. In Phu Tho province, half of the monthly rainfall amount has fallen in 5 (five) hours. Houses were damaged and roads destroyed as a result of the disaster.

On October 18, 2020 in the central part of Vietnam, several people died or went missing as a result of the landslide.

Since the beginning of this month, in the central part of the country heavy rains have caused the strongest flooding in recent years, which killed many people.

In Quảng Trị Province, rivers have reached their highest level in 20 years.

Floods in neighboring Cambodia have not stopped either. Since early October 2020, heavy rains have led to massive flooding in most of the country, which caused a loss of many lives. More than 25,000 (twenty-five) thousand people have been forced out of their homes.

More than 50 (fifty) thousand houses and 290 (two hundred ninety) thousand hectares of rice and other crops have been flooded. Road communication was also disrupted.

As you can also see, recent hurricanes have become very violent and have a direct impact on people's lives. Vietnam has been suffering from historic floods for 20 years. And this is also a consequence of climate change. Therefore, it is necessary to unite the efforts of all to limit the effects of climate change.

And what I would like to add is when you face such forces of nature in person, all material values are relegated to the background. After all, any person wants to just live!

Whatever situation we find ourselves in, let's be kinder to each other!

In mid-October 2020, Europeans also faced the consequences of the water natural force. Due to the abnormally high amount of precipitation in Slovakia and Germany, the water level in local rivers rose to critical levels, which led to the flooding of the territories.

Record low amount of snow in the Alps, severe storm in Germany, flooding in Slovakia

Heavy rains caused flash floods in Slovakia from the 12th to the 15th of October 2020. Unfortunately, casualty has been reported.

In many regions, so much precipitation fell in one day, which significantly exceeded the monthly norm.

For example, in Pjesoka, Modra municipality, Bratislava region, more than 65 (sixty-five) millimeters of rain were recorded, and in Klyak, in the Žarnovica region, Banská Bystrica region, about 70 (seventy) millimeters,while the  average monthly rate is 45 (forty five) millimeters of precipitation. Due to such an abundance of water, several rivers overflowed their banks. In particular, the level of the Gornad River has risen from a mark of 1 (one) meter to the maximum level - 4.17 (four point and seventeen) meters. Rescue operations and the evacuation of the local population had to be carried out as a result of the natural disaster.

Earlier, on October the 14th, 2020, after heavy storms, northern parts of Germany were affected by floods. In Mecklenburg-Western Pomerania, the water level rose nearly one and a half meters above normal. Strong gusts of wind broke branches and damaged trees, making some roads and railroads impassable.

Meanwhile, glaciers are rapidly shrinking in Switzerland. In 2020 alone, 2 % (per cent) of their volume has disappeared, and the snow accumulation on the largest glacier in the Alps has fallen to a record low level for all time meteorological observations. Over the past 60 (sixty) years, Swiss glaciers have lost so much water that it could fill the Lake Constance, which is located on the border of Germany, Austria and Switzerland and stretches for 63 (sixty-three) km.

Iceland. Earthquake. The opinion of the witness

I am a reporter from Iceland. And today I would like to share with you news about the earthquake, which occurred here on October the 20th. What I want to say is that, in fact, Iceland was not surprised by earthquakes, there are a lot of them from tens to hundreds per day, but magnitude 5 and 6 earthquakes haven't happened for a long time and people got scared. The tremors were felt within the radius of 150 km, but most of them were felt in the capital region - Reykjavik and its suburbs. The last such earthquake was  registered 17 years ago. A smaller 5.1 magnitude earthquake was registered in March this year. After a strong tremble, about 400 more aftershocks have been registered. And experts are now following this zone of activity, they say that there is nothing to worry about, there should be no volcano eruption. That's all I wanted to say. Iceland for Breaking news on ALLATRA TV.

Drought in Paraguay and record heat in Phoenix, USA, the worst fire ever in Colorado

By mid-October 2020, due to the lack of rainfall in the Pantanal area of Mato Grosso, Brazil, the Paraguay River is at its lowest level in 50 years. As reported, the situation is critical and the water drops by 3-4 centimeters daily. Access to drinking water is questionable. Marine transportation is also currently in a difficult situation. It is worth noting the fact that about 85% of foreign trade of Paraguay is carried out by means of this river. The river that flows from this region also passes through Bolivia and Argentina.

Meanwhile, in Phoenix, Arizona, USA by October the 13th, 2020 a new temperature record was  set - 144 (one hundred and forty four) days of the year at + 37°C and above. This figure was the highest in the history of meteorological observations in this region.

In the state, after the hottest summer and one of the driest monsoon seasons in the history of observations, there was no significant cooling in autumn. In addition, the rainy season was quite weak.

In the neighboring state of Colorado, USA, by October 14, 2020, a powerful forest fire in Cameron Peak was the largest in the history of the region. Several thousand people had to leave their homes. The fire damaged and destroyed more than 90 (ninety) buildings, including 33 (thirty three) residential houses.

The fire in the state began in mid-August 2020 and by mid-October it surpassed previous fires of this period. The high rate of fire spread continues due to extremely active dry conditions and strong wind. According to data, as of October the 15th, 2020 the area of wild fire was about 67 thousand hectares.

On October 19, 2020 a powerful 7.5 magnitude earthquake happened off the coast of Alaska in the USA. The origin of this seismic event was located at the depth of 40 km. After the main seismic event, 38 aftershocks have been registered, the magnitude of the biggest one made 5.9.

A tsunami warning has been announced in the region. According to news sites about 2 000 people felt strong tremors and some schools were temporarily closed. This is quite a powerful earthquake, but due to the fact that it happened in the ocean, there were no destructions.

How to pass this period of global cataclysms?

How to ensure the value of life for every person?

After all, it is obvious that any country on its own is not able to cope with the consequences of natural disasters.

During natural disasters, not only destructive events are dangerous, but also the fear that provokes chaos and panic. As a result, reckless actions or complete inaction become the cause of death.

The only evolutionary solution is to unite all the people of the planet for the survival of today’s civilization, which is our main task now. And one of the main factors that can minimize the consequences of cataclysms is the choice of people to show respect and willingness to support and help each other.

Only together, in a friendly and united way, people can change the world for the better and build a creative society, a world of security and equal opportunities for everyone.