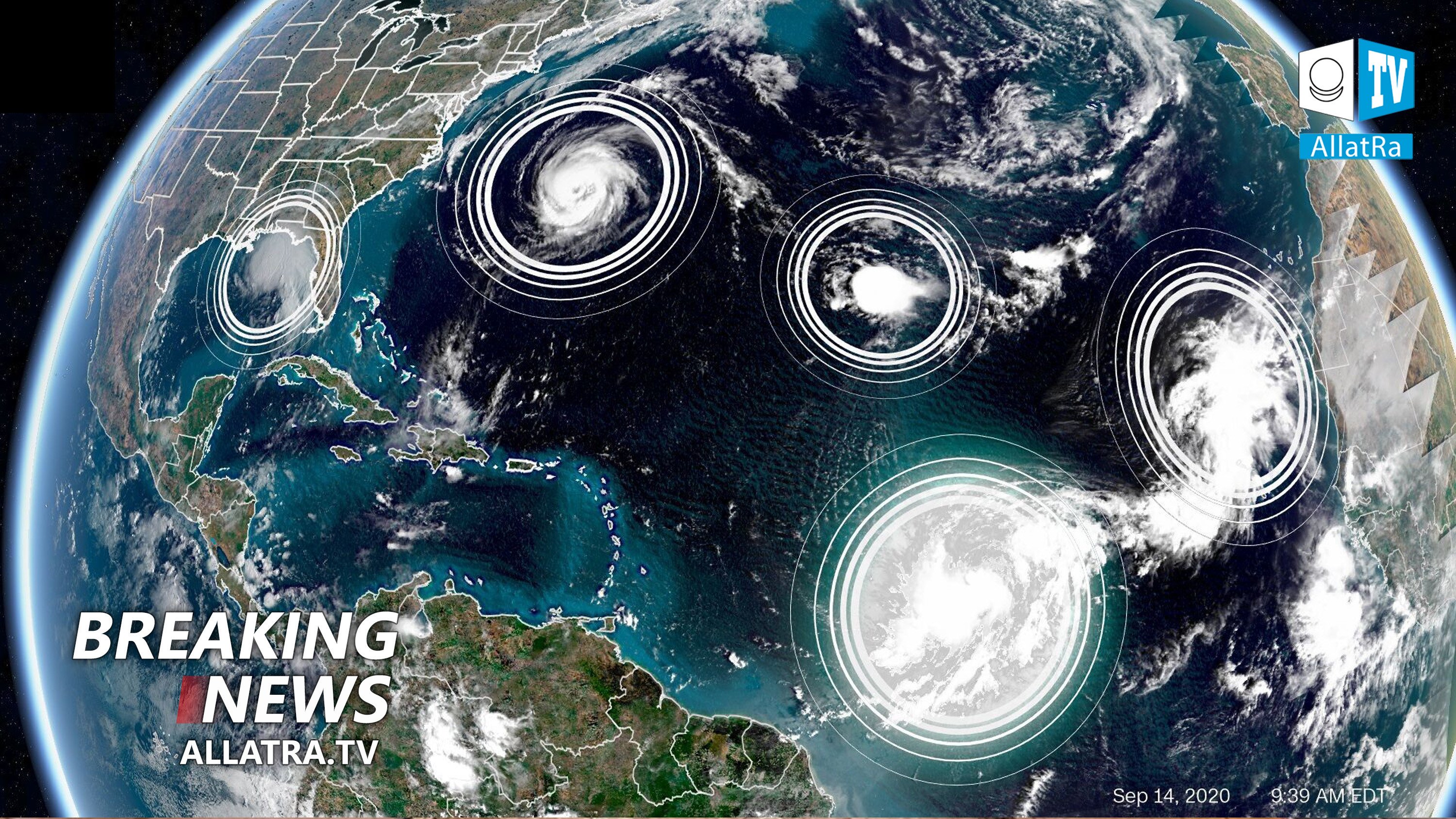 The facts show that the climate changes that we see today have occurred on our planet more than once. Approximately every 12 thousand years, the climate changes rapidly, which threatens the lives of entire civilizations. Scientists are finding evidence of this today. During this period, it is the choice of humanity that plays a decisive role in its future destiny. Watch in this episode

On September 10, 2020, heavy rains caused floods in Washington (D.C.) USA. The surrounding areas of Maryland and Virginia were also affected.

In some areas, up to 200 (two hundred) mm of precipitation occurred. As a result, roads were flooded. Dozens of drivers needed help from the rescuers.

In the same time, five cyclones have formed in the Atlantic Ocean. As reported, this is a new record, when the region simultaneously has 5 (five) tropical cyclones which has not happened for almost fifty years.

One of them is Hurricane Sally, which hit the southern United States on September 15, 2020. One casualty has been reported.

Evacuation was announced in many districts of Mississippi, Alabama and Florida. Heavy rains and storm surges caused flooding in coastal areas. Bridges and roads were closed due to the force of nature, and some businesses and schools were shut down. More than 540 (five hundred forty) thousand houses and businesses were left without electricity. Buildings and houses were also damaged.

The impact of the disaster was felt by residents of the entire northern coast of the Gulf of Mexico.

In early September 2020, heavy rains in Tunisia caused flooding. There are casualties. Hundreds of houses were damaged and many roads were flooded.In Kairouan, almost 2.5 monthly precipitation was registered during the 24-hour period.

On September 12, 2020, flash floods occurred in Cape Verde. There are casualties. The city of Praia, and other areas of Santiago Island are affected. Almost a month's rate of rainfall was registered in the city during the 12-hour period. As a result, buildings, bridges and cars were damaged, and several main roads were blocked.

From 12 to 14 September 2020, floods occurred in several provinces of Indonesia. Casualties and missing people have been reported . In total, about 13 (thirteen) thousand people were affected, almost 2 (two) thousand of them were forced to leave their homes.

In Chile, a powerful earthquake occurred again. So, on September 11, 2020, fluctuations in the earth's crust were recorded in the North of the country. A magnitude 6.3 earthquake was felt in a number of areas: Arica-I-Parinacota, Tarapaca and Antofagasta. According to the data, about 2,000 people felt a moderate tremor of the ground.

The next day, a strong 6.1-magnitude earthquake struck near the East coast of Honshu, Japan.

On September 15, 2020, a deep-focus earthquake of magnitude 6.4 occurred in Kamchatka, Russia. Due to the fact that this seismic event was located at a great depth - more than 300 km - it did not cause any damage. Experts also noted that such a continental earthquake, the epicenter of which was not in the ocean, but under the Peninsula, is quite rare.

On the same day, tremors of magnitude 6.1 were recorded off the coast of Fiji.

This was only information about some strong earthquakes in a short period of time, and if you look at the statistics from September 10 to 17, 2020, 160 earthquakes with a magnitude higher than 4.0 occurred during this period.

Rare sandstorm | Turkey. Floods on the island of Sardinia, Italy

On September 12, 2020, a powerful sandstorm covered part of the city of Ankara, Turkey. A strong wind demolished the roofs of the houses were fallen trees, and from-for a wire breakage failures occurred in the supply of electricity. Several fires caused by lightning strikes were also reported. Several people were injured by objects that were thrown from side to side by the gusty wind.

Although September is a dry month in this region, due to the mountainous terrain, sandstorms are very rare in the city.

Earlier on September 10, 2020, severe thunderstorms with heavy rains hit the Italian province of Cagliari, located on the island of Sardinia. Heavy rainfall turned streets into rivers. Hurricane-force winds, with gusts of more than 100 km/h, were accompanied by lightning and heavy rain. In a few hours, a number of areas of Sardinia were hit by monthly precipitation. As a result of the disaster, many trees were felled, entire neighborhoods were flooded and traffic was obstructed. Many cars are stuck on flooded roads.

The truth about the history of the previous civilization in the conference "Kaleidoscope of facts. Atlantis. Hidden history»

Conference "Kaleidoscope of facts Atlantis. Unknown history" has already turned and will still turn the view of many people on the past and most importantly the present. Residents of more than 10 countries participated in the international study. In different sources in different languages, they searched for facts that would tell us about the existence of Atlantis, how this civilization lived and what led to its death. Participants were prompted to study the understanding that now in our society is about the same thing that happened in Atlantis on the eve of its sudden flooding. Comparison of information from different sources: archaeological finds, geological data, historical documents, etc.gave a complete picture. The previous civilization could not pass the climate tests that came with the change of the next astronomical cycle, because of the predominance of the consumer format in the minds of people and in society as a whole.

Our humanity is now at the same point. And how can we not repeat the mistakes of the past civilization? Looking at the format of the society in which we live, each of us can honestly answer ourselves what the future holds for us.

Today, the only real solution for us is the format of a creative society. In such a society, every person is important and valuable!

The importance of the creative format of society in the period of global climate change | people's opinion.

The question “how the transformation of society from consumers to creative society will help during the global climatic cataclysms?” - is a very important question for our society today. And first I would like to say that in the creative society human life will be of highest value and the best human qualities will prevail. People will do what is best for the society and the society will make sure that all people live a comfortable and prosperous life. With this being said in the time of climatic events in the creative society everyone will work together in order to calmly and jointly help each other.

Also I would like to quote the last part of the third foundation of the creative society which is “Human safety”. And it states the security of human and society from any kind of threat is insured by a unified global service that deals with emergency situations. Here not only will we know that our neighbor will help us in case of any emergency. We will also know that there is a global emergency service which will also come to our rescue. And I believe that the global cataclysms are inevitable and that only united together we can survive. This has been proven by scientists today and a lot of people today already see that climate is changing and it's changing very rapidly. And most people today understand that only united can we overcome the climatic changes that are going to be happening in the future and that are happening right now. And it's I'm happy to say that today we interviewed people from all over the world and all of them see the importance of unification. They all want to live by the best human qualities and they understand the importance of it.

Heavy storms and tornadoes in the UK, Italy. Flood...
11 October 2020 120
View all
Contact the Movement participants
from different countries via ALLATRA IPM Coordination Centre
We welcome you to join
ALLATRA TV
Subscribe to the Telegram channel