Europe is FLOODED! → France, Turkey, Serbia. It's freezing in Africa! Huge hail in Morocco, Mexico, Canada The first month of summer brought another climate anomaly to countries around the world. Europe was literally flooded - the floods of June 2020 occurred in several European countries at once 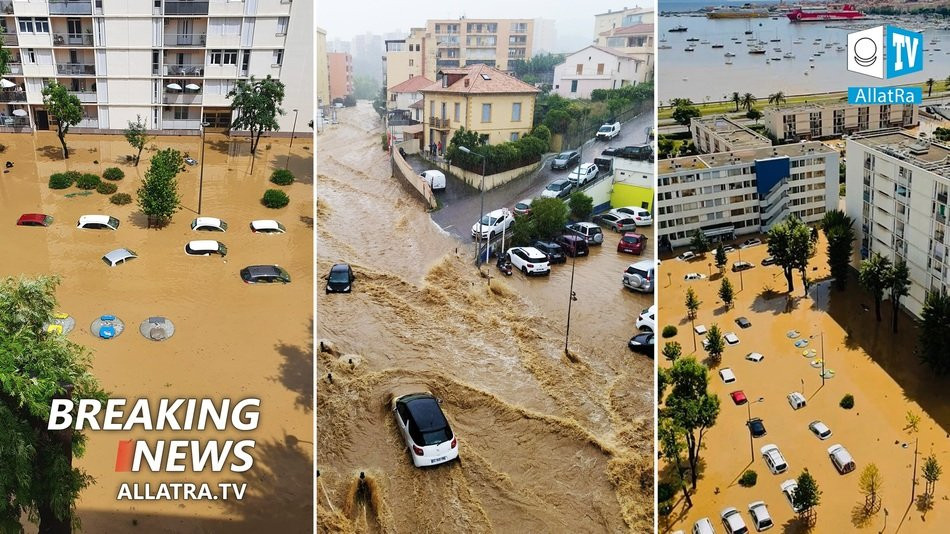 On June 8, 2020, in the capital of Serbia - Belgrade, about half of the monthly amount of precipitation in June fell in three hours. In some areas of the city, the water level rose more than one meter. Water flows impeded the movement of cars and urban transport, and the bus station was also flooded.
Later, the storm hit New Belgrade and flooded the entire city.
On June 11, 2020 in the south of France, in the departments of Gard and Lozère, 4 times of the monthly amount of precipitation fell in just a day. Such an amount for this time of year is a very abnormal phenomenon. Some overflowed rivers burst their banks, flooding fields and villages, destroying roads, and cutting off some settlements from the outside world.
In addition, in the department of Gard, a landslide came down because of the rains, which caused a parking lot to slide into the ravine.  And in the Lozère Department, several café terraces were washed away by strong streams of water.
On the same day, flooding also occurred in Ajaccio, on the island of Corsica. Within just two hours, 103 mm of precipitation fell in the city, which is 5 times over the monthly norm.
The drainage systems were overloaded, which resulted in flooding. Rapid streams of water poured into the streets, washing away cars, some of them were flooded up to their roofs. As the rescuers evacuated people from the cars, one fireman got injured.

“Therefore, a question arises: Are we humans ready for the impending global cataclysms? How can we survive? The answer to this question was given by the esteemed Igor Mikhailovich Danilov. We are to be united in a single human family, AllatRa.”

Floods and earthquakes in Turkey and the Baltic States. Thunderstorms with hail

On June 8, 2020 heavy rains accompanied by thunderstorms and hail took place in the Baltics, in Latvia in particular. The size of some hailstones reached 8 cm. Streets in many cities were flooded.
A few days later, on June 11, Ankara streets in Turkey turned into turbulent rivers due to a downpour with thunderstorm. The water flooded more than 250 (two hundred and fifty) offices and homes. Unfortunately, there was one casualty.
In some parts of the city, up to 300 mm (three hundred millimeters) of rainfall fell, which is almost a year's amount. Many drivers left their cars in the middle of flooded streets to save themselves.
On June 14 2020, a 5.9 magnitude earthquake struck Bingel Province in eastern Turkey at a depth of only 5 km (five kilometres).
As a result of the seismic event, a person died and many people were injured. About 10 homes in two villages were damaged. Earthquake shocks were felt in many neighbouring provinces.

On June 8, 2020, heavy rainfall with hail struck the capital of Mexico - Mexico City.
As a result of the disaster, a huge layer of hail was formed on the streets of the city, while some roads were almost submerged.

Because of the flood, an orange danger level has been issued.
The northern and central parts of the city were most severely affected. Although June is one of the rainiest months of the year, about 40 mm of rain fell in some places per day, which is more than a third of the monthly norm.

On June 13, 2020, in the city of Calgary, Alberta province of Canada rain and heavy hail also wreaked havoc. Many drivers had to leave their vehicles to escape the rapidly arriving water. Large hail broke windows and left dents on cars.
Earlier, on  June 6, 2020, a giant hailstorm struck the Fez region in central Morocco. Automobiles and crops were damaged, and birds were also killed.
The day before, the country experienced a wave of heat, followed by cold, resulting in a sharp temperature contrast, which caused a hailstorm.

In northwest Mexico, temperatures reached 40 degrees Celsius, breaking records in May and June. Thousands of fish like sardines died off the coast of Lower California. And in some regions, seawater temperatures have reached very high levels. And that confirms that climate change is actually happening around the world.

Drought and heat in China. Cold in Africa and the United States

In June 2020, the Inner Mongolia Autonomous Region, in northern China, was hit by severe drought covering 45 percent of the territory.
About 44 million hectares of crops and over 50% of pastures were damaged. In the central and western parts of the region in May of this year, there was less rainfall than usual. Meanwhile, the heat that was observed at the end of May further aggravated the situation.
In early June,  the air temperature reached  +39 degrees Celsius in a number of provinces.
While on the 7th of June, 2020, the temperatures rose up to +40 degrees Celsius.

Meanwhile, winter suddenly returned to some mountainous US states. There was a snowstorm in Wyoming. Due to heavy snowfalls, accompanied by strong gusts of wind, some intercity roads were closed.

On  June 13, 2020, unexpected cold spells also hit most of the Republic of South Africa. There were sub-zero temperatures in many areas. In Mpumalanga, for example, -13°C (minus thirteen degrees Celsius) and in Free State, -11°C (minus eleven degrees) were recorded. Despite the fact that this region has entered its climatic winter, such frosts are abnormal.

Realizing the importance of uniting all humanity and the need to change the format of society, the "Creative society" project has been started on the platform of ALLATRA IPM.

Now is the time when everyone should voice in which society he wants to live and it is important.
Just as he or she understands. Speaking from the Soul about the most important thing.
About how we want to see the world around.
The more people express their opinion about this, the faster people will combine their efforts, experience, and skills to build a constructive society.

Friends, please join this creative initiative.
Record life vlogs and post them on your YouTube channels and social media pages with these three hashtags:

You can now see them on your screen.
We will show the most interesting videos in future news episodes.