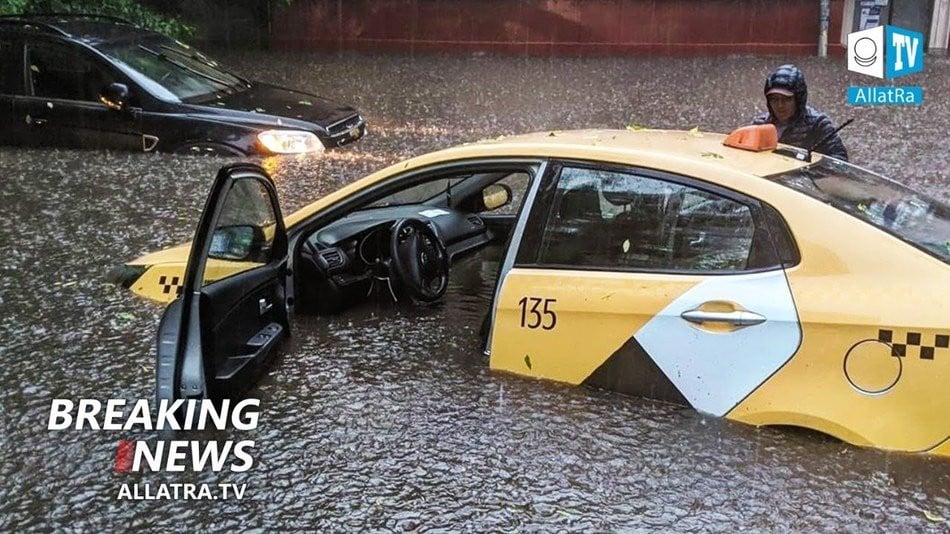 We are happy to welcome you on the LIVE broadcast of the Climate Breaking News on ALLATRA TV.

Watch reliable information about climate disasters in the previous episodes.

We believe that the only chance for all humankind is to unite and, as a result, to build a creative society.
Perhaps you have a question, but how are  the climate, the union of people and the creative society  connected in general? And the connection is actually direct.
Now, imagine how a person, who has survived the cataclysm, feels when he's... lost his house, lost all his property, or lost his family and friends.
After all, people in most cases are left alone with their misfortune.
And only in the creative society a person will be protected from any threats, because such a  society is directed towards the people themselves. No one will be left without food, without shelter, and most importantly, without the support and assistance of society. After all, society is every person.

In one of the previous videos we already told you about the worst drought in the Czech Republic in 500 years, which has been observed in the country for the last 5 years. But in June the situation changed radically and the red alert was declared due to the manifestations of a completely different force of nature. Other European countries were also affected by the same force of nature.

Since June 20, 2020, red danger levels have been introduced in several regions of the Czech Republic. Unfortunately, there are casualties. In the north and north-east of the country the water level in the rivers has risen due to heavy rains. Extensive areas have been flooded in the area of Friedlant.

Earlier, from 13 to 15 June 2020, powerful storms hit the country in some places, resulting in flash floods. In some areas, people had to be evacuated.
In the Zlin region, as a result of heavy rain, roads were so flooded that cars were tied up in the mud and had to be removed with excavators.
This is the second wave of sudden floods in the country in the last few days. About a week ago, flooding in the Olomouts region caused serious damage and death of a person.

At the same time, on June 14th 2020, a powerful downpour with gusty winds hit Budapest and its surroundings in Hungary. Unfortunately, there is one casualty. The storm that lasted for several hours left behind flooded streets, cellars and underground passages. Also trees were downed and power lines were cut.

On June 16th 2020, a powerful storm covered northern Greece. It was accompanied by a heavy rainstorm with hail.
In the periphery of Eastern Macedonia and Thrace, the city of Drama was affected by the natural forces. In some places, the height of the layer of fallen hail was about 40 (forty) cm, and therefore traffic was paralyzed.
As a result of a disaster, trees were downed and houses were flooded.

On June 18, 2020, heavy rainfall with hail in Istanbul and Bursa Province in Turkey, also caused severe flooding. As a result, offices, residential buildings and roads were flooded, making traffic difficult. In addition, a lightning strike was recorded on the roof of the building, causing a fire.

Video of an eyewitness from Slovakia

Hello! I live in Dolni Kubin in northern Slovakia. I would like to share with you observations of abnormal weather manifestations that have been going on for quite a long time. After a prolonged drought with high temperatures, heavy rains came, causing floods in many parts of Slovakia. On  June 21st, a second degree warning was issued, warning against possible danger due to heavy rains and floods for the areas of Czeda, Naměsto, Tvrdošín. The districts of Bitca, Kisutské-Nove Mesto, Žilina, Považská Bistrica, Banská Bistrica, Martin, Dolní Kubín, Rožomberok and Liptovský Mikuláš, Poprad, Kežmarok, Stará Lubovňa and Sabinov had the same warning, only in the first degree. In the municipality of Zubne in the Humenne district, the water flow washed away the bridge. In the Bratislava region, firefighters had to go on eighteen calls, most often to scoop up excessive water. Many cellars were flooded, not only in Bratislava, but all over Slovakia. The same happened in Namestovo and other cities, mainly in the east of the country. In addition to heavy rains, hailstone larger than usual fell in the area of Namestovo. I have never encountered such strong and prolonged weather manifestations in my life. And I see it happen all over the world. And that's why it's very important that everyone knows about it. After all, we are living in a time of global change, which in the very near future will affect the life of every person on planet Earth. And we, as humanity, have one last chance to unite and do everything together to survive those difficult times that are coming. So let us unite, because for me the most important thing is the life of a human being on Earth!

On June 18th 2020, after a record heat, a thunderstorm, downpour, hail and gusty wind hit St. Petersburg, Russia, resulting in partial underflooding of roadways in several parts of the city. Roads were flooded and trees were downed. Unfortunately, there are injured and dead.
And on June 20 in the south of Moscow there was the strongest downpour with thunderstorms and hail for the last 92 years. In a few hours half of the monthly amount of rainfall fell. Streets, highways and underground passages were flooded.
In addition, on June 13 and 17 2020, several settlements in different regions of Russia were affected by major hail.
As a result, many buildings and residential buildings have been damaged and thousands of hectares of crops have been destroyed.
In Smidovichi district of the Jewish Autonomous Region an emergency regime was introduced.

In Yakutia, beyond the Arctic Circle, there is a small town, Verkhoyansk, which is called the cold pole of the northern hemisphere.
In 1892, a record low temperature of minus 67.7 degrees was recorded there. And on June 20, 2020 a new record was fixed - about 38 degrees above zero.
As reported, "this is the first time such temperatures have been observed here in the history of meteorological observations."
According to experts, similar temperatures in the northern regions of Yakutia are caused by the warm masses brought by the anticyclone.

On June 25, an abnormal weather phenomenon occurred in Altai. In summer snow suddenly fell on the Semynsky pass, and the temperature dropped to -1 degree. It has surprised people a lot, as the average temperature in this region in June is + 18-20 degrees. And not far away in the Altai village of Nalobikha quite a big hailstorm fell out.

In June the situation with forest fires worsened. More than 30 thousand hectares of forest are burning across Russia. The largest areas of fire are in Yakutia, Kamchatka, Chukotka and Magadan Oblast. A state of emergency has been declared in two districts of the Kamchatka region.

In June 2020, forest fires are raging in the southwestern United States.
The largest areas of fire have been recorded in Arizona, where the fire was recognized as one of the biggest in its history.
The fire also covered vast areas in California, Colorado, New Mexico and Nevada.
Low humidity and strong winds contribute to the spread of the flame.
In some areas, the fire is getting close to residential areas where residents are evacuated.
And in Guatemala and HondUras, heavy rains continue, causing landslides and flooding. These cataclysms have already affected thousands of people and caused thousands of deaths.

On June 16 2020, thunderstorms and  rains were observed in the UK. As a result, almost a month's rainfall fell in just 3 hours. There was a fire in several houses due to lightning hitting the roof. Fortunately, the firefighters reacted quickly, saving people.
On June 18 in Côte d'Ivoire, in the city of Abidjan, half of the monthly rainfall rate fell within 48 hours. That's a lot, even though it's the rainy season in the country. Floods have destroyed roads and rail tracks. In the town of Anyama, a landslide has demolished dozens of houses and killed people.
A similar situation was on June 13 in Nepal's Parbat district. Heavy rains also caused a landslide there, resulting in loss of life and missing people.

What conclusion can we draw from today’s episode? The climate is subject to natural cyclical changes, and it's already clear that it's not a consequence of human activity, we can't lie to ourselves and say  that that has happened before and soon it'll all stop.
What's happening now is happening for us, as a civilization, for the first time. And we no longer have time to just watch it, we only have time to act. But to act together.
When we stop dividing ourselves into territories and leaving the people who are now suffering the most from climate change, justifying that this is their country and therefore their problems.
When all of humanity will join forces and focus on creating a society that can survive the greatest ordeals that have already begun for us.
When we unite the potential of all scientists to study disaster prediction and find ways to protect humanity in an integrated manner. Only then will we have a chance!

WHAT IS THE CAUSE OF THE FIRES? Wildfires in Calif...
07 September 2021 1089
View all
Contact the Movement participants
from different countries via ALLATRA IPM Coordination Centre
We welcome you to join
ALLATRA TV
Subscribe to the Telegram channel

The First Step Towards the Creative Society
19 November 2022 176