Raging storm Amanda → Storm Cristobal in the Gulf of Mexico Thunderstorms in the USA → 87000 lightn Record rains in Russia and China. Abnormal hail in Italy. Multiple threats in the US. Storm Amanda in Guatemala and El Salvador. Storm Cristobal in the Gulf of Mexico. Heavy flooding in the United Arab Emirates and Oman. Large-scale locust invasion in Iran. Abnormal heat in Central Asia. Dry may in the UK 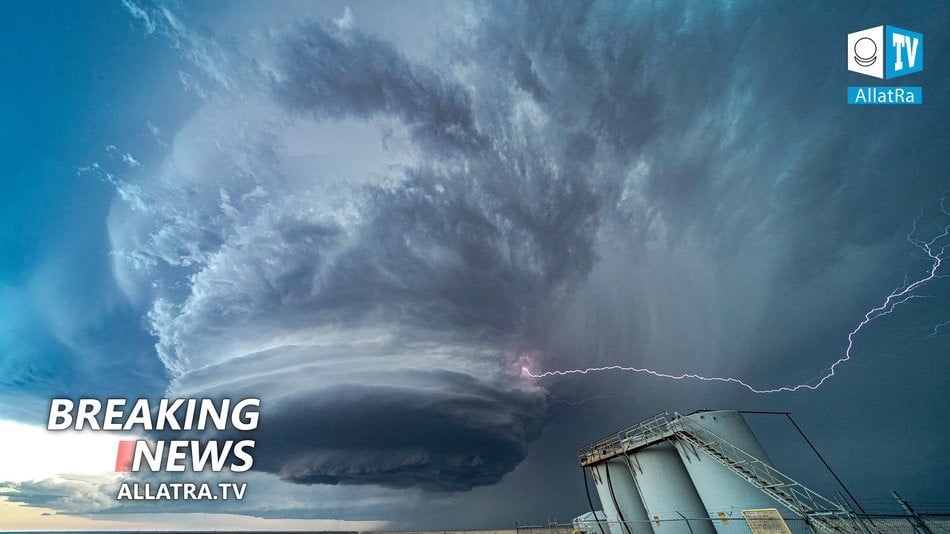 More and more often we see a large hail coming down, and this no longer appears to be so abnormal. But the size of hailstones has become larger and this is directly related to global climate change.

At the beginning of June, some cities in Italy were hit by hail, and earlier, record rains took place in Russia and China.

RECORD RAINS IN RUSSIA AND CHINA. ABNORMAL HAIL IN ITALY

In Russia, thunderstorms with heavy rains, strong winds, and hail took place on May 29th, 2020 in the Kursk region and on May 31st in Ufa. Some hailstones reached the size of a chicken egg. The storm caused destruction to several homesteads, damaged the roofs of over 20 houses, and several cars and toppled over trees.

Since May 29th, 2020,Moscow and its region have experienced  a record amount of precipitation throughout the history of meteorological observations. In the capital, about 120% (one hundred twenty percent) of the monthly rainfall was recorded per day. Due to the prolonged rainfall, many highways were flooded. Residents of Krasnogorsk said that this is the most severe flooding over the past 60 years in their city.
Another record was registered on May 31st, 2020 in Yunnan, in China. There also, the heaviest rainfalls have been recorded since meteorological records began.
Unfortunately, some people were killed while others are missing. About 9 (nine) thousand people were affected, of which more than 2.5 (two and a half) thousand were urgently evacuated.
As a result of landslides and mudflows, roads were cut off, houses, power supply facilities, and communication lines were damaged.

On June 2nd, 2020, in the Italian region of Lombard was hit by heavy rain with hail.
In some areas, hail reached the size of a walnut, in others, it was smaller, but in much larger quantities.

In the cities of Alzano - Lombardo, and Nembro, the water flows led to flooding and formation of snowdrifts of hail, the height of which was almost to the knees of an adult.
Basements, underpasses, and streets were flooded. And roads were blocked as a result. Such weather conditions were observed in the region 6 years ago.

Record rainfall at the end of May also fell in the city of Miami in the U.S., and the sky over Oregon and Washington states sparkled with tens of thousands of lightning bolts.

MULTIPLE THREATS IN THE USA

On May 27th, 2020, in many areas of Miami in the state of Florida, USA, heavy rains led to flash floods. Almost 188 mm of precipitation fell in the city, which exceeded the monthly amount in May. This is a record amount of rainfall over the past 115 years.

Flooding affected the ground floors of buildings, basements, shops; power lines were damaged as well.
On May 30th, 2020, tens of thousands of lightning were recorded during numerous thunderstorms over the US state of Washington.

Thunderstorms from the western region moved to the central and eastern, accompanied by a large hail and wind gusts of up to 112 (one hundred and twelve) km/h. Almost 87,000 bolts of lightning were recorded across the state — nearly 2/3 of the state’s average annual lightning bolts.

In Oregon on that day, about 11% (eleven percent) of the average annual lightning bolts were observed. There have also been several cases of lightning striking trees.

Often when it comes to climate, we hear phrases as abnormally, record-breaking or atypical. It seems that it is just words. But behind this news are irreversible processes that directly affect people's lives. AllatRa TV reporter from Salvador will tell us about the storm, "Amanda" and Cristobal, and also about the earthquake in Latin America.

STORM AMANDA IN GUATEMALA AND EL SALVADOR. STORM CRISTOBAL IN THE GULF OF MEXICO

On May 31st, a tropical storm, Amanda, hit Guatemala and Salvador. It became the first tropical storm of the season in the eastern Pacific. Unfortunately, some people were killed while others are missing.
A state of emergency was declared in El Salvador. About 900 (nine hundred) families left their homes.
Nature forces provoked floods and numerous landslides, roads were also damaged and trees were felled.

In neighboring Guatemala, landslides were also blocked and local floods were reported.
On June 3rd, 2020, the remnants of the storm entered the Gulf of Mexico, where it again intensified to a tropical storm, which was given the new name “Cristobal”. Wind speed is estimated at 95 (ninety five) km/h. It became the earliest ever third named storm of the season in the Atlantic.
On June 3rd, 2020, an earthquake of magnitude 6.8 occurred in northern Chile, the Antofagasta Region.
The epicenter was located about 50 km south of the village of San Pedro de Atacama, the hypocenter was at a depth of about 80 km.
Due to the rampant disaster, several cities are completely disconnected from the power supply. No injuries were reported.

Earlier, statements about the flood in the Sahara or snow on the Canaries could only be surprising, but now the flood in the desert is the harsh reality of today.
Also, we observe that recently, due to climate change, the situation with locust invasions has seriously become more acute, the populations of which are increasing every year. About a large-scale invasion of locusts in Iran and floods on the Arabian Peninsula, see further in the episode.

On May 26, 2020, in the United Arab Emirates, heavy rains provoked sudden massive floods.
In the emirate of Sharjah, several cars were literally swept away from the road by a flooded stream. Unfortunately, there are dead, wounded, and missing.
The next day, in the Hatta Valley in Dubai, police rescued 20 passengers from a bus that was blown off the road by a stream of rushing water.

On May 29, 2020, coastal areas of the Dhofar region of Oman suffered from heavy rains caused by tropical depression.
As a result of the fury of nature there are dead and missing.
Different living areas and roads were covered with water. Whereas in some areas water level was reaching car roofs.
In the lowlands of the city of Salalah, property was damaged due to the rapid flow of water, and traffic on the roads was completely stopped.
In the most affected areas, power outages and water supply interruptions occurred. In addition, the flood led to the closure of many enterprises.
At the same time, Iran is experiencing the largest invasion of locusts in the last 50 years.
Disaster has plagued the country for the second year in a row, but this time locust clusters are much bigger. Insects gather in huge swarms, blocking sunlight, and turn the blue daytime sky into twilight.
Locust swarms spanned parts of the south coast, as well as Sistan and Balochistan.
I have been living in Dubai for 8 years and climate change is obvious - at least with everyone I’ve spoken to so far. Our climate has now become milder and at the same time, snow is already falling out every year, and not only in the emirates and regions of the Persian Gulf with mountain terrain. This year, floods, hail, and heavy rains have happened several times already and their cyclicality is growing.
Climatic cataclysms are already happening all over the world and it becomes impossible to predict them. Every day, the forces of nature take the lives of hundreds of people and thousands lose roof over their heads and all their property.
Only by starting to change the format of society from consumer to creative and constructive humanity has at least a chance of survival. Only by uniting together as one family, we can go through these times of cyclic disasters, the times of the crossroads.
This will affect everyone - therefore, already today we need to start with ourselves: become more humane in the family, at work, in society. After all, society it’s me and you.

In recent years, countries in Central Asia have experienced significant increases in temperatures. Unfortunately, such conditions seriously affect people's livelihoods. Allatra TV reporter  will tell about this and abnormally arid weather in the UK.

ABNORMAL HEAT IN CENTRAL ASIA. DRY MAY IN THE UK

The year 2020 in Great Britain was marked by the sunniest spring in the last 90 years. Also a record was set for the driest May in 124 (one hundred twenty four) years.
In several regions of the country, the minimum rainfall fell, which was from 4 to 15% (percent) of the monthly average in May. Some crops have already been affected by drought.
The driest period came after the wettest February in the history of observations was recorded, when winter storms caused flooding.

On May 26th, 2020 in Uzbekistan, the air temperature reached 35-39 ° C. And in several areas the thermometer posts reached 40-42 ° C.
Also at the end of May in the Turkestan region of Kazakhstan, the air temperature warmed up to 40 ° C in the shade.
The heat did not pass and Turkmenistan in some cities thermometer bars showed up to 45 ° C. Such temperature values are not typical for the end of May in these countries.
It is also worth noting that in recent years, on some days of May, the average temperature rose by almost 10 C.

7 years ago, when I came to the UK, I was very surprised that the grass here was green all year round.
For the second year in a row in the spring, the grass turns yellow and dries up due to lack of precipitation and high temperatures.

Every day makes it clear to humanity how it approaches a certain verge connected with climate change in our time. And these are not just words - they are many lost lives and destroyed destinies of people. In consumer society these losses become a statistic. But the biggest value is a human life.
We need to build Creative Society today so that our civilization has a future.

Now more and more people are beginning to realize that many patterns of behavior and life values ​​have been imposed on them for many years. And no matter if you have beautiful clothes, a house or a car, it is important to be a Human in any situation.

I am not admired by those people who, at the risk of their own lives, are trying to make a beautiful shot for social networks, but I am admired by those who are doing everything possible to save human lives and do not succumb to the provocations of the consumer society.

Posturing will not help those suffering from disasters, the accumulation of unnecessary things will not feed hungry children, the senseless struggle between people will not return heat to the destroyed houses. Only by directing attention to a constructive channel and joining forces, we build a world of the present in which joy, kindness and harmony reign.