Abnormal heat around the world. Record temperatures. Summer 2018. Breaking news. Special report. Abnormal heat has set in these days in many regions of the world. July 2018 becomes one of the hottest in the history of meteorological observations. The temperature has reached record levels in the USA, Canada, the Middle East, some European countries, Russia and even Northern Siberia. 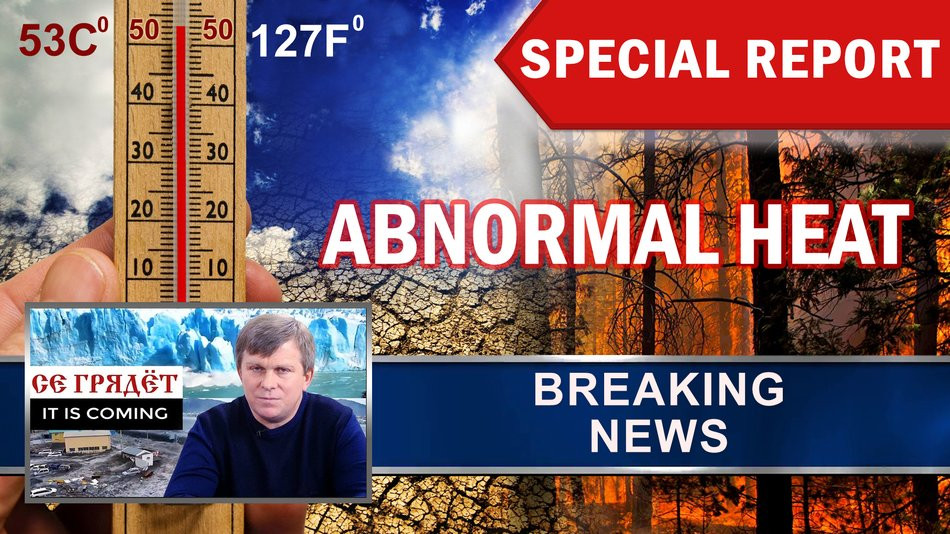 Abnormal heat around the world. Record temperatures. Summer 2018. Breaking news. Special report.
25 July 2018
( 0 )
Translation
Русский Čeština
subscribe:
Leave a comment
Abnormal heat has set in these days in many regions of the world. July 2018 becomes one of the hottest in the history of meteorological observations. The temperature has reached record levels in the USA, Canada, the Middle East, some European countries, Russia and even Northern Siberia.
In this special report, ALLATRA TV reporters from around the world tell us about the anomalous weather phenomena, the atypical heat that is now being observed virtually  throughout all continents.
True causes of such phenomena were laid out in detail in the report by the researchers of ALLATRA SCIENCE: "On the problems and consequences of global climate change on Earth. Effective ways to solve these problems"
https://geocenter.info/en/pages/climatology-report-online
It is now obvious that the consequences of climate change on the planet cannot be avoided. Every abnormal weather phenomenon shows how fragile a person's life is. But in any situation we can find a way out  together. By uniting efforts, by changing the attitude towards people around you. By relying on feelings of unity, kindness, humanity, friendship, we, the people, together can pass this test on fortitude of the spirit.
During global climate changes and the upcoming cataclysms, it is very important that people have information about how to behave in case of emergencies.
If you have information and experience of what can help people in an emergency, please email us at [email protected], or share your experience in the comments below.
About the global climate change and the real ways of solving the related problems you can learn from the programme "CE ГРЯДЁТ. IT IS COMING" on ALLATRA TV with the participation of Igor Mikhailovich Danilov.
_____________
- Hello!
Abnormal heat has set in these days in many regions of the world.
The temperature has reached record levels in the US, Canada, the Middle East, some European countries and even Northern Siberia.
Anomalous heat causes serious damage to agriculture and leads to widespread fires. People die...
This is the Breaking news on ALLATRA TV! And today's topic is the abnormal heat around the world and its consequences.
- In Northern Siberia, along the coast of the Arctic Ocean, on July 5, the temperature soared up to a record of 32.2°C, which is absolutely unbelievable for this region.
On July, 5, record high temperature was recorded in Africa. Thus, in the city of Ouargla, Algeria, the thermometer went up to 51.3° C. This is the highest temperature in Africa’s history. The previous record of 50.7° C was set on July 13, 1961 in Morocco.
In Japan, 3,500 people were hospitalized, three died of overheating. Because of unbearable heat in Australia, 50 cars got stuck in the melted pavement. Many cities in Britain recorded a record-high for this time of year air temperature (in Glasgow 31.9 degrees, in Belfast 28.5 degrees). In some areas, because of the heat, the house roofs melted and the rails got deformed.
_____________
CANADA:
- A wave of extreme heat covered Canada, northeast of USA and the state of Kansas. In total, about 90 million people were affected by the heat wave.
In the southern part of the province of  Quebec, within a period of 7 days, 54 people died of complications related to  high temperatures (age 50 to 85). Most of the deceased were were men who had health problems, and in whose houses there were no air-conditioners.
This data was announced in the bulletin of the Ministry of Health, which states that the largest number of deaths (28 people died) was recorded in the city of Montreal. Since June 30 in Quebec, thermometers have reached +35° C, although the temperature in July usually does not exceed 26 degrees Celsius. The heat is accompanied by high humidity and lately smog. As meteorologists note, this is the worst heat wave experienced in the region in decades.
_____________
USA:
- Hello, this is ALLATRA TV USA reporter Olga.
In the United States, there were several cases of death caused by heat.
So, on July 6, in Los Angeles as well as some other regions of Southern California, the temperature rose to +43.8° C. In addition, the heat  wave might worsen the situation with forest fires in the United States. Particularly, in the state of California, fire covered more than 34 thousand acres of land and may continue to destroy everything in its path because of the high air temperature .
They were only able to deal with 30% of the outbreaks.
In Utah, a wildfire destroyed at least 90 homes and is threatening hundreds of others. Fire covered about 17 thousand acres of land, with only 2% handled.
_____________
- Record heat  set in in Iran and the Caucasus countries.
The heat wave covered Iran, Azerbaijan, Armenia and Georgia, as well as other neighbouring countries. In some places, the air temperature reached +53° С.
Georgia:
So, in the Georgian capital, Tbilisi, on July 4, the temperature soared to +41° C. This contributed to a significant level of air pollution being reported by the National Environmental Protection Agency.
Azerbaijan:
On Sunday, July 1, the temperature in the Azerbaijani capital of Baku reached a record level of +43° C. Active use of air conditioners by residents led to the overload of hydroelectric power stations, which resulted in power supply  outrages.
_____________
Fragment from the programme "CE ГРЯДЁТ. IT IS COMING" on ALLATRA TV with the participation of Igor Mikhailovich Danilov.

- Now, if we look at the current situation today, well, some deny global warming, some fight for it. But this is, frankly speaking, once again — this is a tool of profit for many. And what's happening today behind the window, this is not the result or rather, not a consequence of human activities, right?
This is not an anthropogenic factor, it is not the result of activity, let’s say, of the development of civilization — the emissions and everything else.
Meaning, yes, we are dramatizing a little bit - a day or two, not more than that.
And in general, maybe this is fair. Many will say: “How is this unfair? But this is life.” But what do we do in reality just honestly, just hand on heart, what do we do to make life better, the life of all people, not just one’s own. Well, isn’t that right?

Every abnormal weather phenomenon shows how fragile a person's life is.
And at such moments a question arises, is there anything more valuable than Life?
We all have something to reflect on, don't we?

WHAT IS THE CAUSE OF THE FIRES? Wildfires in Calif...
07 September 2021 918
View all
Contact the Movement participants
from different countries via ALLATRA IPM Coordination Centre
We welcome you to join
ALLATRA TV
Subscribe to the Telegram channel