Climate anomalies: floods, tornadoes, hurricanes. Breaking News on Climate Change. ALLATRA TV Climatic changes on Earth are happening with ever-increasing force and this is already the reality of today. Climatic anomalies: flooding, tornadoes, hurricanes, record temperatures, storms, and abnormal hail are seen more and more often all over the planet. The climate news from all around the world. 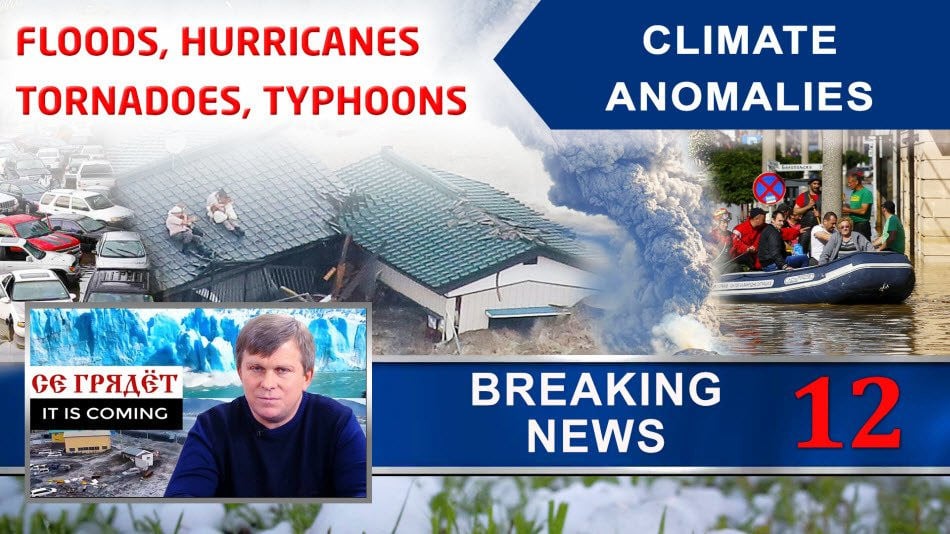 Climatic changes on Earth are happening with ever-increasing force and this is already the reality of today. Climatic anomalies: flooding, tornadoes, hurricanes, record temperatures, storms, and abnormal hail are seen more and more often all over the planet. The climate news from all around the world.

In this episode of the Breaking News on ALLATRA TV:

Russia. In the summer of 2012, the most destructive flood took place in the city of Krymsk in Kuban region. Eyewitness’ story.

Belarus. Tornadoes (twisters) in Belarus. The twisters are a fairly recent phenomena for Belarus. Experts connect this with the climate change.

China. On June 7, a typhoon hit for the fourth time this year, reaching the province of Guangdong. The wind gusts reached Beaufort force 8 points. Many cities suffered from heavy rains, roads got flooded. The Guangzhou zoo as well as Baiyun airport were completely swept by torrential rains.

Guatemala. The participants of ALLATRA International Public Movement reached out to Faride Irene Coll Zaid - a volunteer psychologist who is at the camp for refugees and victims in Guatemala.

Egypt. Interview with Dr. Khalid Zayed (Cairo). About extreme record temperaturs in Cairo - up to 50 C, which never existed in this region before. About the importance of uniting people of all cultures and nationalities into one tight-knit family. “We are all people, we are all brothers and sisters, and we need to unite according to our common origin - we are all PEOPLE” - said Dr. Zayed.

Indonesia. On May 11,  there occured a sudden eruption of one of the most active volcanoes in Indonesia, Mount Merapi on Java Island. On May 21st, volcano Merapi erupted again, creating  ash rain.

Russia. The beginning of summer in Russia was very atypical. In the middle zone of the country there was a near-zero temperature, snowfalls were observed. And on May 30th, a violent storm swept through two dozens of regions of Russia at once.

Canada. At the same time, on the opposite side of the globe, in Canada, there was a powerful snowfall. In some areas, up to 36 cm of snow fell.

Mexico. At the same time, in Mexico, the air temperature exceeded the mark of +50 degrees Celsius. In the capital of the country, a hundred-year record of the highest temperature of the day was registered.

For more information, watch a unique programme on ALLATRA TV: "Се грядёт. It is coming"
https://allatra.tv/en/video/it-is-coming

And also read the report by ALLATRA SCIENCE scientists: “About problems and consequences of global climate change on Earth. Effective ways of solving these problems”
https://geocenter.info/en/pages/climatology-report-online

We invite all who are interested to join the “Breaking Climate News” project. This can be done right now by sending an email to [email protected]

WHAT IS THE CAUSE OF THE FIRES? Wildfires in Calif...
07 September 2021 1032
View all
Contact the Movement participants
from different countries via ALLATRA IPM Coordination Centre
We welcome you to join
ALLATRA TV
Subscribe to the Telegram channel