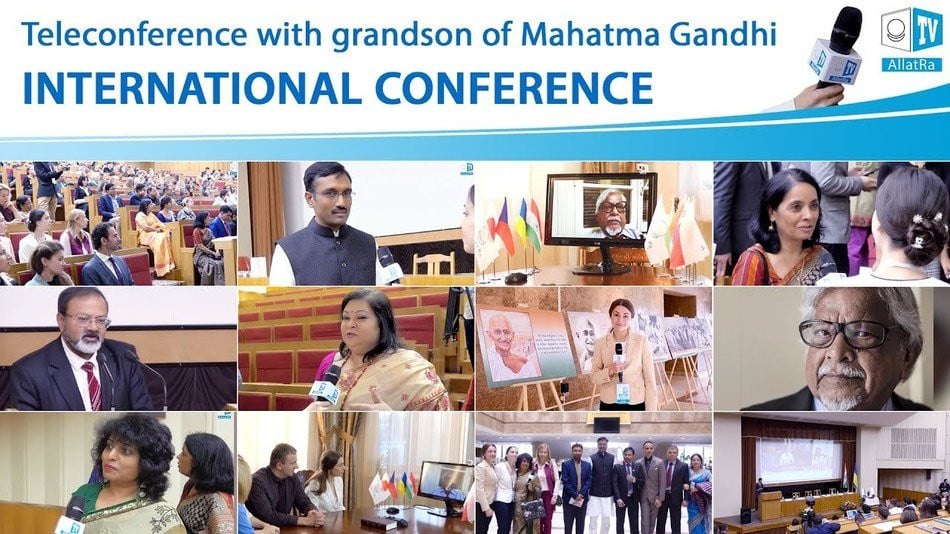 The conference was filled with diverse speeches devoted to the peacemaking views of the Indian public figure and philosopher Mahatma Gandhi. The pleasant atmosphere at the event was created by the sincere interest of the audience, it was felt that all present, understand and hold very close the universal spiritual values popularized by Mahatma Gandhi: mutual respect, peace, love, unity.

The end of the large-scale conference was marked by the motivational words of Indian Ambassador Manoj Kumar Bharti and by a unique video-teleconference that was prepared specifically for this event by volunteers of ALLATRA TV:  with the participants of  ALLATRA movement, the grandson of Mahatma Gandhi – Arun Manilal Gandhi made his solemn announcement to the world.

This example of friendship, unification and international partnership initiated by the participants of ALLATRA movement, sincerely inspired all who attended the international conference towards creative action.

Let us recall that Arun Gandhi, along with well-known scientists and cultural figures of the world, took part in the film "THE UNIVERSAL GRAIN. Part one. The CHOICE" on ALLATRA TV, where he paid special attention to the importance of a person's work on himself in today's society.

Sincere actions of ALLATRA movement participants, in practice, show the essence of Mahatma Gandhi's famous saying "Be the change you wish to see in the world". The results of activities done by ALLATRA volunteers show that those who really strive towards unity, create opportunities for it here and now. Every choice made by a person in a creative way creates a series of subsequent good deeds that are reflected on other people. And events are like mountain rivers, as a result, they flow into the mainstream of bringing people together on the basis of spiritual and moral foundation.

"God is One. ALLATRA unites"- unifying video, showing that people of different cultures, ages, nationalities, from all over the world share common humane values and understandings:
https://allatra.tv/en/video/god-is-one-allatra-unites

Time to Manifest Ourselves | ALLATRA News. Live #3...
30 January 2021 512
View all
Contact the Movement participants
from different countries via ALLATRA IPM Coordination Centre
We welcome you to join
ALLATRA TV
Subscribe to the Telegram channel