Activation of Yellowstone. Abnormal snowfalls. Unification of people. Urgent news 6 In the cycle of programmes “Breaking News”, ALLATRA TV reporters from all around the world illuminate the true climatic situation on the planet and show creative examples of unification of people. 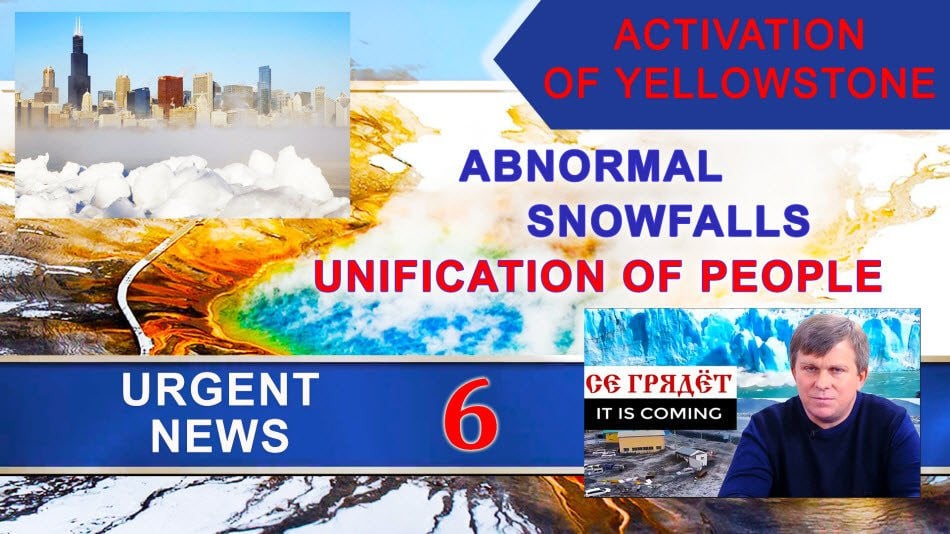 In the cycle of programmes “Breaking News”, ALLATRA TV reporters from all around the world illuminate the true climatic situation on the planet and show creative examples of unification of people.

Programme “Се грядёт. It is coming”

In this episode:
-  The most powerful in the last 45 years flooding in Indiana. Suspicious activity of the Yellostone caldera USA has been shaken by a series of 8 earthquakes in less than 24 hours

-  Information by a local Katherine about an earthquake which took place in Mexico in the middle of February. Increase of seismic activity in Mexico.

-  People helping people. An eyewitness from Mozambique, Jose Carlitos, tells about dry river and climate changes that local residents are observing in Mozambique

-  A report from Great Britain, where abnormal for local climate and time of year weather conditions have been observed just like in many other regions of Earth. Starting on February 26, 2018, a cyclone by the name of “Beast from the East” has descended upon Great Britain. It brought massive snowfalls and severe cold.

About people who show many examples of good deeds, mutual assistance, and humaneness. Under conditions of sharp worsening of climate conditions, people exhibit compassion and regard for each other.

-  Abnormal cold and snowfalls in Italy. Snow and frost and polar cold haven’t spared even some areas of Sardinia. The snow fell in the south, in Naples, where there hasn’t been snow (2 days in a row) since 1985, the last 33 years.

A resident of Naples, Fortuna, has graciously agreed to tell us about a recent snowfall in Naples. This is a very rare phenomenon in this region.

-  Snow fell in Florida. As resident of Florida themselves say: “You can live here your whole life and never see snow”. But in the beginning of this year, snow fell here. This phenomenon was called “snow bomb”.

-  The most powerful in the last 100 years snowfall in Russia. Trees fell, in places, snow reached 2 meters. Regardless of the fact that snowbanks exceeded human height, people exhibited commendable examples of unity, helping each other in various situations.

-  People show an example of how social networks may be used for unifying efforts and helping each other in extreme situations. People began to unite and offer their help to those who became a victim of the elements. To feed, keep warm, or take home anyone who needed it, became possible thanks to efficient use of social networks. This is an example of how good deeds of one person are taken up and strengthened by others. How kindness and the need to help others awakens in people.

The Breaking News are created by the volunteers of ALLATRA International Public Movement from all around the world. We invite all who are interested to take part in the common cause - informing the humankind about real climate events all over the planet.

WHAT IS THE CAUSE OF THE FIRES? Wildfires in Calif...
07 September 2021 1028
View all
Contact the Movement participants
from different countries via ALLATRA IPM Coordination Centre
We welcome you to join
ALLATRA TV
Subscribe to the Telegram channel