It is Important for everyone | Creative society | ALLATRA NEWS | LIVE

It is Important for everyone | Creative society | ALLATRA NEWS | LIVE 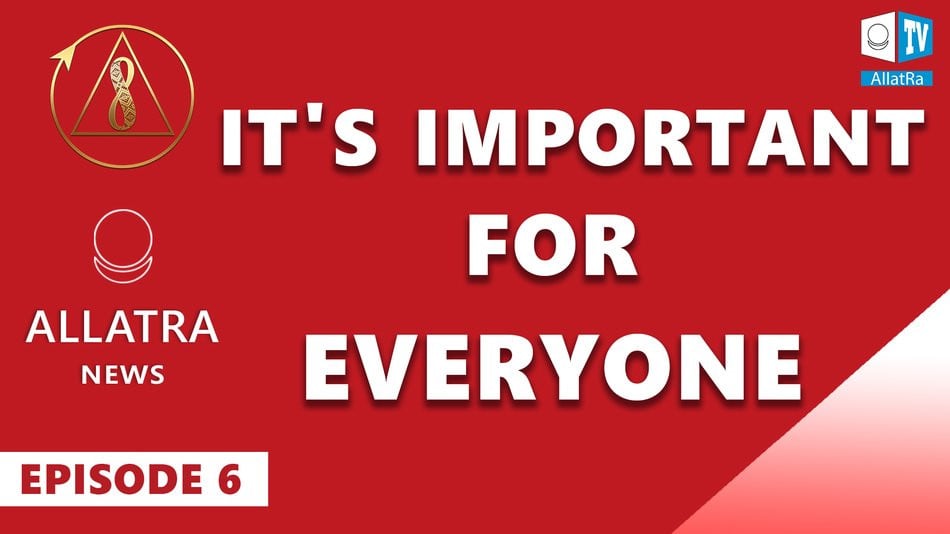 In today's episode of ALLATRA NEWS:

Allatra news on Allatra TV Live. Recently was released on the YouTube channel ALLATRA TV LATVIA video "Creative wave”, which was filmed by participants of ALLATRA IPM from Latvia

What was the inspiration for this film?

This film is just one of millions of examples of how people are already acting. The idea this so is very close to us, and we understand how important it is that as many people as possible find out about it. The purpose of the film “Creative wave " is to tell a story from the life of an ordinary person. This is a film about one person, but everyone can see themselves in it. How sincere aspiration and actions can launch a wave of good and creation in society - a Creative wave. And if each of us is involved in this process, we can change the vector of development of the entire civilization in the near future.
We were interested in changing the genre of presenting information when covering events, so we made this film in the art and documentary genre. We were inspired to shoot this film by the short film "Everyone wants to be happy”, which was recently released on ALLATRA TV.

Also, participants of the movement from Latvia in addition to shooting films, social networks, conduct surveys and interviews, conduct book presentations, translate broadcasts, and main websites of the movement into Latvian. Today the book has already been translated “Ezoosmos” and is being prepared for publication. Previously, the book “Sensei I " was translated and published in Latvian”
We are also involved in simultaneous translations of breaking news and the Allatra News on the Latvian language. And now, at this moment, this broadcast is being broadcast to the Latvian region and translated into Latvian. Everyone acts on the basis of their capabilities on the ground.

Due to the increased number of video interviews and opinion polls shooted in English by ALLATRA TV reporters around the world, there were a need to organize teams that can help in creating English-language content.

And already for a several month, a friendly team has been creating videos in English from scratch: we make editing, we watch them and make suggestions, we prepare a description and create images.
And we invite everyone to join this creative activity.

Also our English-speaking participants of the Movement shoot life vlogs where they share how they got acquainted with the knowledge and started participating in projects. We also invite everyone to record vlogs in English language and send them to the [email protected]

In order to spread and promote knowledge in the English-speaking community, a new YouTube channel ALLATRA TV was created in English, in order to attract people who are not familiar with knowledge and live in English-speaking countries. A large number of calls and Analytics were conducted, and interesting and fascinating videos were created based on books by Anastasia Novykh and videos with participation of IM Danilov.

If you have English-speaking friends, relatives, please share with them a huge amount of new information in English!

And about a week ago, a new YouTube channel Creative Society.Allatraunites was created. As one more platform for organizing and conducting live broadcasts, as well as publishing social surveys about a creative society.

Every day participants from America, the United Arab Emirates, India, Africa and other countries conduct live broadcasts in English with people around the world, and guests of the broadcasts invite their friends and acquaintances to the next broadcasts, thereby starting a chain of relationships that leads to the rapid dissemination of information about a Creative society.
In this regard, more recently, the Movement's participants from different countries have created YouTube channels Allatra TV India and Allatra TV Africa on the initiative of people living in these countries.

Together we can do a lot!
As you can see, there are a lot oftasks and we opend to new ideas! We invite everyone to join the development of THE English-language allatra TV channel, to participate in the creation of videos, translations, and many other creative activities. We will be happy to move forward as a big friendly team! Write, please,
to email [email protected]

"Very good day Valeria! Indeed, the citizens of African countries through various channels find out about the project and get really inspired by the idea of Creative Society. They take the initiative, write to the ALLATRA TV email and join the implementation of this project. This triggers a chain reaction of further positive changes.

As a result, just a few weeks ago, thanks to the active actions of the citizens of African countries and volunteers of the ALLATRA International Public Movement from around the world, the YouTube channel AllatRa TV Africa was launched. I would like to share a few examples of how people, once they got acquainted with the Creative Society project, became active participants.

For instance, Kanu from Nigeria wrote to the project’s email and after a conversation with ALLATRA IPM Participants, he expressed his interest in further participation in the online social survey “6 Degrees of Connection”. Eventually, inspired by the idea of Creative Society, he started to shoot social surveys with his friends and relatives and manifested his desire to develop this project further.

Another great example is Arthur from Uganda. Volunteers of the Creative Society project met Arthur on a business social network and invited him to live broadcast “6 Degrees of Connection”. Arthur got also inspired and expressed his will in the development of the project. He began to invite friends and acquaintances to future broadcasts and participated as well as a co-host.

These kind of examples show that one person can do a lot. Such initiatives have become a precedent for the creation of the ALLATRA TV AFRICA channel, where, organized and conducted by the people of Africa themselves, 6 Degrees of Connection conversations are being broadcasted live.

ALLATRA IPM Participants from different countries of the world supported these active actions, and now a large international team is working on the creation of each broadcast. Currently, this is the platform on which African people transmit information about Creative Society to their colleagues at work, take part in live broadcasts, conduct social surveys and interviews with friends and invite them to broadcasts on the theory of 6 Handshakes, thereby spreading the idea of ​​Creative Society in their countries."

ALLATRA TV team was invited to the business discussion "IT brand of Ukraine in the world"
We were invited to this event by Vladislav Savchenko, President of the European Association of software engineering, which was the organizer of the event "IT brand of Ukraine in the world". ALLATRA TV has known Vladislav for a long time. We were media partners for the national program Lyudyna Roku, where he was nominated. We also talked to him in an interview for ALLATRA TV.
The meeting itself was held in a free format in the open air with beautiful views of the Dnieper and the Lavra. There were interesting guests from government agencies, as well as representatives of it business and socially active youth.
The aim was to discuss topical issues of the it sector and its entry into foreign markets. The key topics raised by the speakers were: unification, synergy, effective interaction between the it sector and authorities, as well as the active position of not only companies, but also it specialists. According to the participants, this is the main way to create a successful it brand of Ukraine in the world.
We were interested in the opinions of people on the topic of a creative society and the participants of the event shared their understanding with us with interest. We learned about the advantages of Ukrainian it in the global market, what new technologies will soon come to Ukraine and how they can help make people's lives easier and freer.
They shared with us a practical understanding of the way of transition from a consumer society to a creative society and how people see a creative society from their professional experience.
Most of the speakers spoke about unification, open borders, the ability to solve any issues in a dialogue, the importance of everyone's active position and readiness to change. Vladislav Savchenko, the organizer of this event, told us about this at the end of the meeting.

Time to Manifest Ourselves | ALLATRA News. Live #3...
30 January 2021 378
View all
Contact the Movement participants
from different countries via ALLATRA IPM Coordination Centre
We welcome you to join
ALLATRA TV
Subscribe to the Telegram channel