Severe heat and fires in California. Typhoon Mekhala in China. Floods in Korea, Spain and Scotland

Severe heat and fires in California. Typhoon Mekhala in China. Floods in Korea, Spain and Scotland It is getting obvious that modern civilization is on the edge of death and now everything depends on each person. After all, for minimization of natural disasters it is necessary already now to stop all local conflicts and together to search for ways to solve a problem of migration of millions of climatic migrants, and also other issues which mankind faces  in the conditions of global climate change.  And our future depends on whether we can unite in the hour of these trials and build a creative format of relationships instead of the current consumer one. 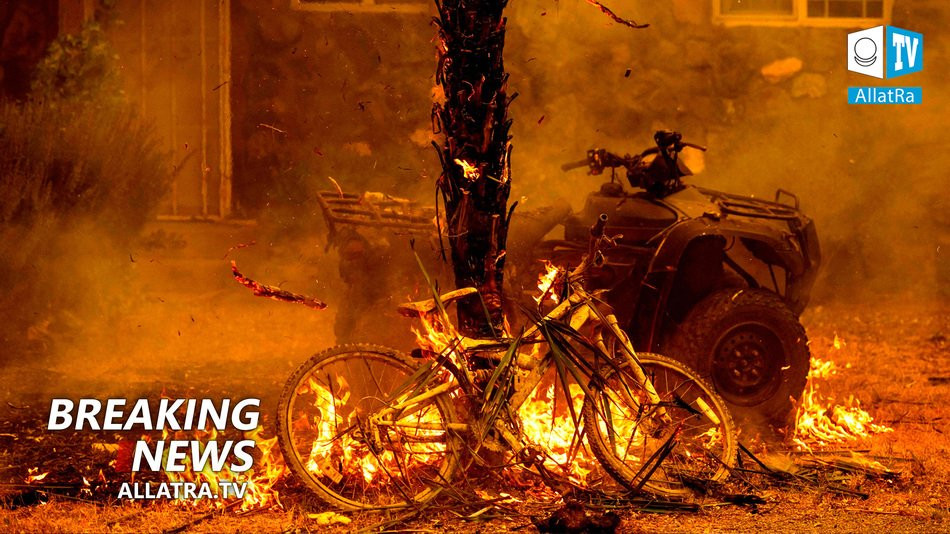 If we look at the world map, we can see that irreversible climate changes are taking place in every corner of the planet today. And if you look at the statistics and facts, they tell us about their leapfrogging and increasing dynamics. Extreme heat, massive fires, powerful storms, earthquakes and volcanic eruptions - this is a list of the events that you will learn about from the reporters of ALLATRA TV taday.

In August 2020, Belgium experienced its hottest week in the entire history of meteorological observations. The average temperature was + 33.5 ℃ (thirty three point five degrees Celsius). This is the highest value since 1833.
Although until recently Belgium has been known for its maritime climate with cool summers.

As an eyewitness, I would like to add that the temperatures, declared by the meteorological services, do not fully show the current picture, since one could find many comments from residents of that area that they recorded a hotter temperature even in the evening.
Even though the nighttime temperature usually exceeded the average highest daytime temperature, this situation makes us seriously consider the rapid climate changes that are happening now. Recently, similar heat records can be observed more and more often in Belgium and not only in summer, but also in winter. And every year we observe their rapid growth..

On August 12, 2020, extreme heat was also observed in Vladivostok (Russia).
The temperature reached +33 ℃ (thirty-three degrees Celsius).
This day has become the hottest since the beginning of the season.
The water temperature in the coastal zone was about + 24 ℃ (twenty-four degrees Celsius).
which is a seasonal maximum.

Also on this day,extreme heat was observed throughout Japan. Casualties and injured people have been reported. In many parts of the country, on August 16, 2020, the temperatures rose to +39 ° C (thirty-nine degrees Celsius). And the next day the city of Hamamatsu reported a record temperature of + 41 ℃ (forty-one degrees Celsius).

On August 14, 2020, in California (USA), due to the stifling heat, the state's power system was overloaded. This led to power outages in more than 350 thousand (three hundred fifty thousand) homes and factories.
High temperature records have been broken in several cities including San Francisco, San Jose, Palm Springs and Long Beach.

Heat and drought caused wildfires in California.
The fire started on August 12, 2020 in the Angeles National Forest and spread to more than 4,500 hectares. People were evacuated.
Air pollution reached the highest rates in 10 years.
Fires in some areas have occurred for the first time in 50 years.
Roads were closed. Homes were damaged.

In California, near the border with Nevada, a rare fire tornado soared into the sky.
Fighting fires is complicated by hot and dry weather and difficult terrain. Fire department representatives said the event was unusual as it formed early in the fire season and spread quickly despite the absence of strong winds.

Earlier, on August 10, 2020, another swarm of earthquakes was recorded on the southern section of the San Andreas Fault in California, USA. Seismic activity under the Salton Sea near the fault is significantly increased compared to the background level. The largest earthquake was magnitude 4.6. The San Andreas Fault is considered one of the most dangerous in the world - it is approximately 1,200 km long and marks the border between the Pacific and North American tectonic plates. Let us recall that along with other cities on the fault are Los Angeles, San Francisco and San Diego.

On August 10, 2020, a powerful storm covered the US Midwest. More than a million people were left without electricity in several states. Unfortunately, one casualty has been reported.
As a result of the disaster, houses were damaged, trees were felled, and a strong wind was blowing cars off the highway. Also, more than 400,000 (four hundred thousand) hectares of agricultural crops were destroyed or damaged.

In Minnesota more than a month's amount of rainfall fell in just one day.
And in the city of Bloomington, the storm was accompanied by a wind speed of more than 97 (ninety seven) km / h. Roads throughout the city were blocked due to the fallen trees.

On August 12, 2020, in Maryland, thunderstorms accompanied by heavy rains led to flash floods. Many roads have been closed due to high water levels.

There was also observed volcanic activity. In Italy, Etna volcano continues to erupt.
On the night of August 10-11, 2020, explosions were almost nonstop. Hot lava flows were flowing down the outer side of the southeast crater cone. The volcano ejected ash and steam plume to a height of 3.5 km (three and a half kilometers).
The volcano's activity is accompanied by extensive outgassing.

Flooding and hail in Spain, flooding in Scotland and Panama

On August 11, 2020, rainstorms, hail and strong winds hit Spain. Floods occurred in the provinces of Cordoba and Seville - streets and houses were flooded. Flood waters blocked roads - people were evacuated from water traps.
There were also power outages.

The municipality of Estepa received 85 mm (eighty-five millimeters) of precipitation in just two hours, which is 17 times the monthly amount. Since the norm of precipitation in August and July is minimal, and even in the autumn-winter period, such amount usually falls in a whole month.
Heavy streams of water poured through the streets, washing away cars, and in one of the houses a wall was destroyed by a stream of water.

A huge hailstorm the size of a hen's egg fell in the city of Ciudad Real. Cars, houses, power lines and farmlands were damaged.

On the same days, there were thunderstorms in Scotland, which caused floods and landslides. Month’s amount of rainfall fell within a few hours in Fife Council. As a result, the streets were flooded, and a landslide descended on the trailer park. People were evacuated from dangerous areas.
In County Aberdeenshire, a passenger train derailed, casualties and injured people have been reported. The cause of the crash was a landslide descended on the rails.

On August 9, 2020, heavy rains fell in Panama, which also led to a landslide. Unfortunately, casualties have been reported. The Bejuco River overflowed its banks and caused floods in the Veraguas province. Dozens of homes were damaged.

Flooding in Mexico, frost and hail in Brazil. Fires in South America

From 8 to 10 August, heavy rains caused flooding and landslides in Veracruse, Mexico. People were killed by a landslide in the municipality of Filomena Mata. Hundreds of people were also evacuated, about 1700 (thousand seven hundred) buildings were damaged. The roads were blocked by mudflows and floods, leaving some communities cut off from the outside world. A state of emergency has been declared in five municipalities.

Brazilians are experiencing a historically cold August, as a result severe frosts over vast areas were recorded in many parts of Santa Catarina.
In the municipality of Bom Jardim da Serra, unprecedented cold records have been set. So, from 3 to 6 August in this area, the thermometers dropped below -8 ° С and this happened for the first time in the history of meteorological observations. Ponds and lakes froze, water supply pipes burst, and a significant number of crops froze.
It should be noted that freezing temperatures in Santa Catarina have been recorded since the end of June. In mid-July, the state recorded many record low temperatures.

Large-scale fires also occur in South America.
During the first ten days of August, over 10 thousand fires were recorded in the forests of the Amazon, which is 17% more than last year.
Yes, bushfires in South America happen every year. But this year, the number of wildfires already at the beginning of the season became the largest in Brazil in the past 10 years and reached catastrophic levels.
This led to colossal emissions of smoke and combustion products, which are intensively carried by winds across the Southern Hemisphere.

On August 11, 2020, tropical cyclone Mekkhala accompanied by strong winds and torrential rains hit Fujian province in southeastern China.
Wind speed in some places reached 120-130 (one hundred twenty-one hundred thirty) km / h. Because of which billboards, trees and fences were downed. Cars, power lines and even the walls of some buildings could not withstand such an onslaught of the natural force.

On August 12, 2020, the Chinese province of Sichuan was severely hit by heavy rains. The red hazard level was declared. There have been casualties as a result of the rapid flood. Over 40 (forty) thousand people were forced to leave their homes. In 14 (fourteen) rivers of this district, the water level has significantly risen. Landslides occured in some places, destroying houses and roads.

The monsoon season continues on the Korean Peninsula. As of August 12, 2020, it has already lasted 50 (fifty) days and this is the longest period in the last 33 (thirty three) years.
Dozens of people died, thousands were evacuated, hundreds of houses were damaged or destroyed. More than 9,000 (nine) thousand hectares of farmland were flooded and crops were destroyed. Near the Somjin River on the southern edge of the peninsula, about 100 (one hundred) meters of the dam collapsed. All regions except Jeju Island declared the highest hazard level due to landslides.

We also found information about how people interacted in an emergency situation, facing the natural forces.
When the water in the river rose and got very close to the bridge, residents of a village in Danyang, Chungbuk province (충북 단양), whose average age was 65 years old, brought 30 tons of sand at their own expense, women carried sacks by truck, and the elderly filled 200 sacks. and piled on the approach of water. Residents did not wait for help and, on their own, erected fences from sandbags, thus preventing the river from causing even more damage from the rampant natural force.

Earthquakes in Tanzania, California, and the Philippines

On August 12, a powerful 6.0 magnitude earthquake struck Africa off the Tanzanian coast, being felt across a vast area from Zanzibar to Kenya. This seismic event was the strongest in recent decades and is unusual for this particular region.

Then, on August 18, a strong 6.6 magnitude earthquake was recorded in the central Philippines.
Unfortunately, there are dead and several people were injured.
Significant damage was caused on the island of Masbate: the roofs and walls of houses, bridges and the seaport were damaged. In addition, large cracks appeared in the roads.
It is estimated that about 120,000 (one hundred and twenty thousand) people felt severe tremor and more than 2.5 million (two and a half million) felt moderate tremor.
The earthquake also caused power outages. The tremors were felt in several provinces of the central region of Visaya and in the south of Luzon Island.

On the night of August 18-19, two powerful earthquakes of 6.8 and 6.9 magnitude occurred near the island of Sumatra in Indonesia with a difference of just 5 minutes. No tsunami threat or destruction was reported.

WHAT IS THE CAUSE OF THE FIRES? Wildfires in Calif...
07 September 2021 711
View all
Contact the Movement participants
from different countries via ALLATRA IPM Coordination Centre
We welcome you to join
ALLATRA TV
Subscribe to the Telegram channel

Creative Society: the Prospect of Civilization
06 December 2020 2157
View all