Time for change | ALLATRA NEWS | LIVE #9 Today, everyone can see firsthand how, thanks to the true friendship of people, their active and coordinated actions, the time of global changes for all mankind is coming all over the planet! 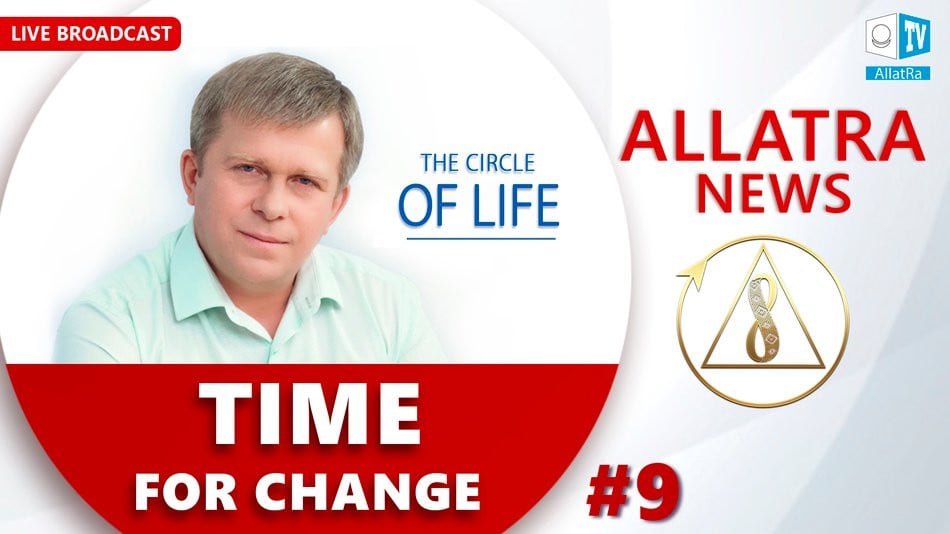 Today, everyone can see firsthand how, thanks to the true friendship of people, their active and coordinated actions, the time of changes and global changes for all mankind is coming all over the planet! By their example, the participants Of ALLATRA international public movement  with inspiration and sincerity create unique conditions for changing the vector of development of our civilization! Every week, ALLATRA TV Live broadcasts ALLATRA NEWS, which shows the scale and results of joint activities of volunteers around the world!

The release of the program "The Circle of Life" with the participation of Igor Mikhailovich Danilov United all listeners in a living circle of Unity and Creation. All people share an inner heritage that does not depend on skin color, religion, or language barriers. After all, the most important language for all people is a single language of deep feelings, goodwill and respect for each other!

The program "The Circle of Life" tells the unique information that in ancient times people communicated in a single language, but due to certain circumstances, which are described in the legend of the tower of Babel, lost this opportunity. People no longer understand each other. Today, it is in the hands of the people themselves that it is possible to revive a Single language. It becomes understandable on the level of feelings to every person, provided that they are open and sincerely strive to understand the original essence without artificially created barriers and divisions.

Also in the video of topical questions that symbolizes the ancient symbol — a circle with a dot inside it, how to find inner freedom, for whatever reason, a person experiences joy or sorrow for three days, than threat offense, how can we learn to truly Love?

The work of volunteers from the US is inspiring and shows that United in a common desire to change the world for the better, we're nearing the time of change — building a world in which every person, through true friendship between people, may feel an equal member of a huge, happy family!

The participants of ALLATRA IPM from Armenia initiated the release of the inspiring video: "Creative society. Unifying mission of the Armenian people" and "Appeal to the Armenian people". The call for universal unification of people was made confidently and loudly. Today, this is a unique chance to create a new society where the focus is on the Person!

At the state level, Armenia has begun to speak openly about the eight foundations of a Creative Society. Taking responsibility for further decisions and actions, they take real steps to achieve their goals every day. The participants of the friendly country also actively support the theory of six handshakes!

True friendship between people continues to inspire good deeds and sincere actions of people around the world. After all, all people are United in their inner desire to build a society in which everyone feels happy! And the real Unity is in Love, which binds everyone with a single thread of Creation! The time for change has already come! The future depends on the current active position of each of us!

Time to Manifest Ourselves | ALLATRA News. Live #3...
30 January 2021 395
View all
Contact the Movement participants
from different countries via ALLATRA IPM Coordination Centre
We welcome you to join
ALLATRA TV
Subscribe to the Telegram channel