Hurricane Isaias. Abnormal heat → Europe, Middle East.Floods and landslides in Japan and South Korea Isaias became the second hurricane of the 2020 tropical cyclone season to hit several countries in the Caribbean. This summer became the coldest one in Norway over the past few decades. 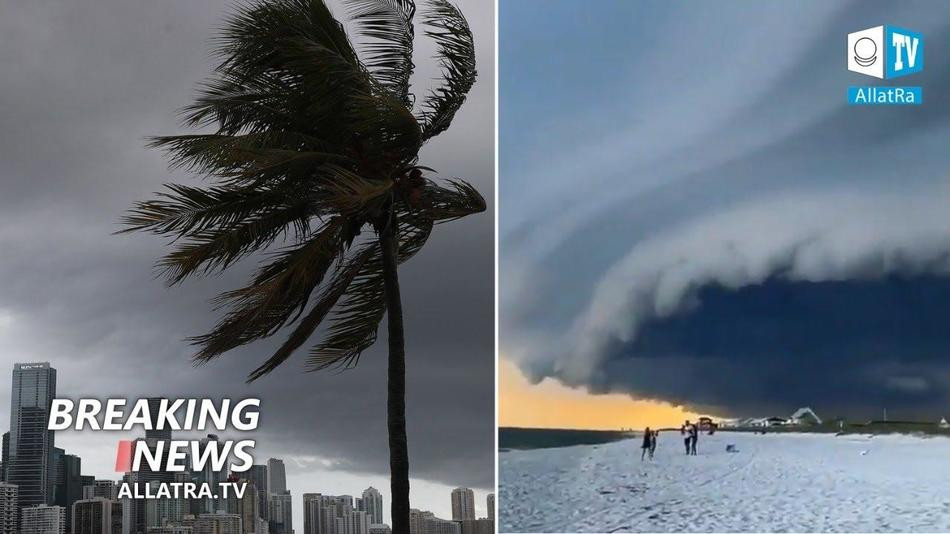 On July 30, Isaias became the second hurricane of the 2020 tropical cyclone season to hit several countries in the Caribbean.
Strong winds with gusts from 75 to 107 km / h were felt in Cuba in several provinces of the Eastern Region.
Strong storm surges were also recorded on the east coast with wave heights ranging from 4 to 6 meters.
For these reasons, Cuba's eastern provinces declared a civil defense reporting regime and little damage has been reported.
Puerto Rico was not so lucky. The impact of Hurricane Isaias in this country led to floods and landslides.

There have been reports of casualties and missing people..
Many residents were moved to shelters.
About 500 (five hundred) thousand houses were blacked out, some roads were also blocked. The wind speed reached 130 (one hundred thirty) km / h.

There were also floods in the Dominican Republic. Due to the overflow of rivers, many settlements were cut off from one another. Strong wind toppled many trees, over 72 thousand people were left without power supply, over 1,000 homes were damaged.
More than 5,000 residents have been evacuated.
The disaster also caused significant damage in Haiti, the Bahamas and other nearby islands, continuing its course towards the eastern part of the United States.

Meanwhile, on August 1, off the coast of Florida, USA, the hurricane lost its strength and dropped to the level of a tropical storm.
Evacuation centers were opened here to save people and a state of emergency was declared.

After entering the mainland in North Carolina, Isaias swept across the United States, leaving damage over a vast area of the East Coast, from South Carolina to the Canadian border.
Casualties and injured people have been reported.

Dozens of people had to be rescued from the flooded houses.

As a result, large-scale flooding has occurred in many settlements. Enormous damage was caused by tornados.
Strong wind knocked down many trees.
At the peak of bad weather, over 3.5 million houses remained without light.
This is just the beginning of the tropical cyclone season in the region, which will last until November 30, and which is becoming more and more  dangerous every year.

This summer became the coldest one in Norway over the past few decades. July brought unstable weather to the country with winds, precipitation and atypically cold weather.
In some parts of the country’s south, there formed snow drifts of over 10 (ten) meters high, which is an unprecedented phenomenon for this time of the year.
According to meteorologists, the average temperature in Oslo was just +14.7 ° C (Celsius), becoming the lowest for this time of the year in almost 30 years. Meanwhile, in Bergen, the average temperature in July was the lowest in the past 24 years reaching +12.8 ° C. Meanwhile, in the city of Trondheim,  the average temperature was only +12.1°C and it was the lowest temperature in almost 60 years.
Snow also covered mountains as the temperatures in Folldal municipality dropped to -4 °C.
As local residents said, "We haven’t seen such a heavy snowfall as we had this year for several decades."

Meanwhile, anomalous heat was recorded beyond the Arctic Circle in the Arctic Ocean on the Norwegian archipelago of Svalbard. The temperature has risen above +20°C. Unusually hot weather is absolutely not typical for this region, since the average air temperature in Svalbard in the middle of summer usually ranges from +5°C to +7°C. The previous temperature record on the islands was recorded forty-one years ago.

On July 27, 2020, heavy rain began in the northern region of Japan. This led to landslides and the overflow of rivers.
In Yamagata Prefecture, 540 people have been cut off from civilization due to landslides.
The next day, more than a month's amount of rainfall fell in the city of Nagai.
In the village of Okura, 96 mm of precipitation fell within just 3 hours, the monthly norm for this region being 143 mm. This resulted in floods, and about 90 houses were damaged. 2,500 people were evacuated.

Large-scale floods are also continuing in South Korea.
Between July 29 and 30, in the city of Daejeon, 200 mm of precipitation fell within just 24 hours, with an average monthly norm of 333 mm. As a result, buildings were damaged, parking lots, roads and railways were flooded.

On July 30, powerful floods also occurred in the Republic of Myanmar. In the Mandalay region, the Irrawaddy River overflowed its banks, which affected thousands of people.

Strong heat. Fires in Europe and the Middle East

Abnormal heat affected the Middle East: countries such as Iraq, Kuwait, Saudi Arabia, Lebanon and Syria were affected.
Iraq and Kuwait have the highest rates reported, reaching +53 ° C. At the end of July in Lebanon, the highest temperature was +45.4 ° C, and a record was set in Syria - in the city of Damascus, where the thermometers rose to +46 ° C.
At the beginning of August 2020, in Saudi Arabia, thermometers showed above +50 ° C.

Meanwhile, in northern Portugal, where abnormal heat is observed as well, the situation with natural fires has worsened.

On July 30, a strong forest fire broke out in the southwest of France in the suburb of Anglet. The fire destroyed vegetation on an area of 165 hectares. About 11 (eleven) houses burned down in the settlement, about 100 (one hundred) people were evacuated. The fire has now been localized. Unfortunately, several people were poisoned with the acrid smoke and have been hospitalized.

All cataclysms that we report on in every episode are parts of one chain of global climatic changes that take place on the planet.
Nature challenges us, but are we humans ready to cope with it? Is each of us ready to be tested for humanity in the wake of larger climatic events?
In order for tomorrow not to be too late, we all need to start building a society now where human life, kindness, love and humanity will be the most important and highest values in everyone's life! After all, only through the unification of all people on the planet on the basis of mutual respect and other ethical and moral qualities, will we be able to overcome any challenges and disasters with honor!

WHAT IS THE CAUSE OF THE FIRES? Wildfires in Calif...
07 September 2021 1130
View all
Contact the Movement participants
from different countries via ALLATRA IPM Coordination Centre
We welcome you to join
ALLATRA TV
Subscribe to the Telegram channel