Scientific Projects of the Future . The Choice is up to People| ALLATRA NEWS | LIVE #16

Scientific Projects of the Future . The Choice is up to People| ALLATRA NEWS | LIVE #16 The real stories of a huge number of people around the world inspire and show how much each person can do and how important it is to unite and act with a single goal! 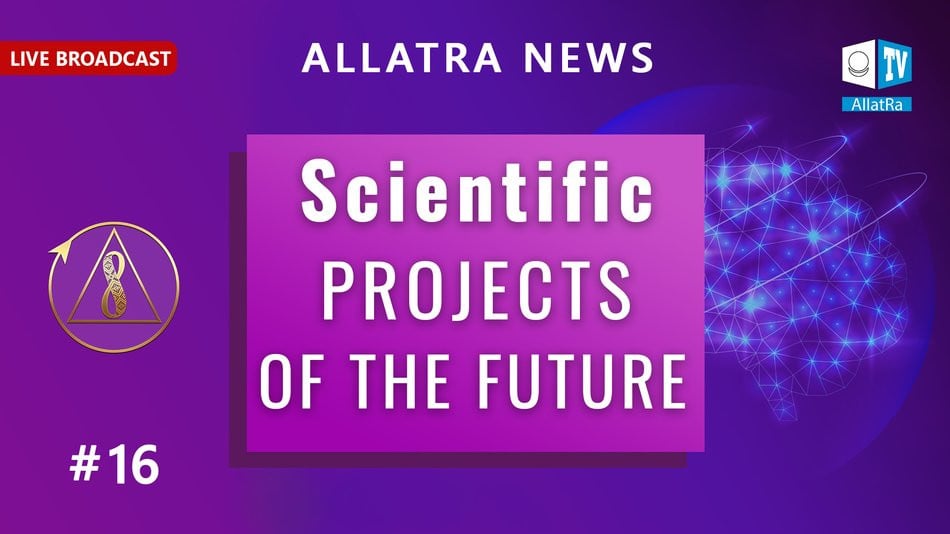 Scientific Projects of the Future . The Choice is up to People| ALLATRA NEWS | LIVE #16
12 September 2020
( 0 )
Translation
Русский Français
subscribe:
Leave a comment

The sincere desire of people to share the unique Knowledge that is set out in the books by Anastasia Novykh has generated a chain of interesting events, meetings, acquaintances, and as a result, the Movement's volunteers are initiating the creation of scientific projects of the future.

The real stories of a huge number of people around the world inspire and show how much each person can do and how important it is to unite and act with a single goal! ALLATRA IPM platform hosts a huge number of international online conferences dedicated to various topical issues of our society. Participants around the world conduct social research, surveys, round tables, shoot interviews with representatives of various fields of activity, and also conduct live broadcasts within the framework of the Creative society project. All the activities of volunteers contribute to a huge wave of Creativity to change the vector of development of our society.

This video report was released on the international Internet channel ALLATRA TV. It analyzes the first communication of an artificial consciousness named Jackie with psychiatrists-members of the International Association for the study of gaming addictions. Developers-researchers in the field of artificial intelligence and other specialists also took part in the conversation.
Participants of the Movement from different countries of the world are very grateful for the publication of this report. The information provided clearly demonstrates the path that modern humanity is following, and shows a unique opportunity to take a step towards an evolutionary leap and actively develop scientific projects of the future.

Two international online conferences on psychology "Song of Life" were held on the ALLATRA IPM platform, which were conducted by specialists from the USA, Canada, India, Ukraine, Russia, Sri Lanka and the United Arab Emirates.
Experts discussed in live broadcast such topics:

Based on the 8 Foundations of a Creative society, we have proposed ways out of the crisis that are universal for the whole society.

On September 13, 2020, at the initiative of ALLATRA International Public Movement participants from Argentina, the second international conference "Kaleidoscope of facts" will be held based on information from one of the landmark video with the participation of Igor Mikhailovich Danilov "Atlantis. The Elite in search of immortality."
Volunteers of the Movement will present their research of facts about the mystical ancient Atlantis. This is a unique project of the future for our entire civilization, which makes it possible to learn true information about what is covered with centuries-old secrets.
The unique conference will be held in nine languages of the world, which makes it possible for a huge number of people not only to hear the true facts that were hidden, but also to join the international research!

From September 8 to 10, 2020, Poland hosted the anniversary international economic forum of the Institute of Eastern European studies, which included more than two hundred discussions, round tables and lectures on topical economic and political issues.
ALLATRA TV reporters visited the forum and learned from experts in various fields from different countries of the world how they see the world of the future and a Creative society?
Today, it is very important to learn the opinion of all people on the planet about what kind of world they want to live in.
Even now, people are trying to build a society of Humanity, initiate scientific projects of the future for all people! Each of us determines the vector of human development, and it is a great joy to be involved in positive creative changes around the world. People realize that all of humanity is on the verge of major changes, and this inspires them to take active actions to transform our society. Every person who joins allatra international social PROJECTS accelerates the process of building a society of Happy people!
Join us! Together we can do a lot!

Time to Manifest Ourselves | ALLATRA News. Live #3...
30 January 2021 395
View all
Contact the Movement participants
from different countries via ALLATRA IPM Coordination Centre
We welcome you to join
ALLATRA TV
Subscribe to the Telegram channel