Yellowstone and Aira. Disasters on the planet. The climate strikes new records! 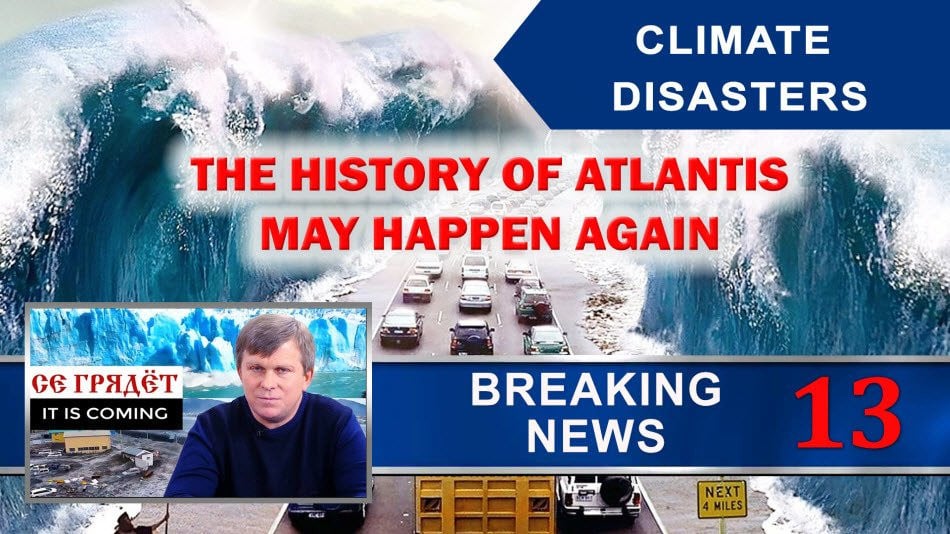 1:34 Japan and China. On July 5, a typhoon Prapiroon descended upon Japan and China, which caused massive rainfall in Japan. 263 mm of precipitation fell in just 3 hours which is a record for the entire 40-year history of observation.

2:16 South Korea. Powerful rainfall caused flooding in many areas of South Korea. Because of bad weather, vehicular traffic was disrupted, some domestic flights were cancelled, and a number of national parks were shut down.

2:40 Japan. Lately, volcanic activity has awakened. The Sakurajima volcano started erupting on the southern island of Kyushu in Japan. This volcano is part of the super-volcano Aira, which is described in more detail in the report by ALLATRA SCIENCE researchers: “On the  problems and consequences of global climate change on Earth. Effective ways of solve these problems”

3:07 USA. Japan. American scientists from the University of Miami and the Florida International University, in the course of their research, discovered a deep underground connection between the Aira and the Kirishima volcanoes in Japan.

5:29 USA. Yellowstone. Today, our attention has been drawn by the information about a new statement of geologists, who discovered that magma in Yellowstone caldera has started to heat up twice as fast.
Geologists found out that the amount of heat emitted through the  thermal springs and lakes has doubled when compared to 2016.

6:47 USA. Thunderstorm in Kentucky.
Thunderstorm in Kentucky. A lot of the hardest storms swept across Southern Indiana, central Kentucky on Friday, July 20, 2018. Bringing with it a very big hail, gale, heavy rain, and at least one tornado.
The largest hail fell in the city of Louisville, Kentucky, about 4 inches in diameter and the size of a baseball.
The strongest gust of wind reaching 70 miles per hour was recorded at Lexington Airport.

9:34 Guatemala. The participants of ALLATRA International Public Movement reached out to Faride Irene Coll Zaid, a psychologist, a volunteer who is in a refugee camp and injured after the eruption of the volcano Fuego in Guatemala.

9:08 Gulf Stream. New research just published in the journal Nature shows that the Atlantic Meridional Overturning Circulation also known as (AMOC) has slowed down since the mid-20th century and that it may have reached a new record low.
A significant shift in the system of ocean currents that helps keep parts of Europe warm could send temperatures in the UK lower.

13:43 Greenland and Antarctica. On July 10, a giant six-kilometer iceberg split off the Greenland glacier of Helheim. The scientists of IMBIE project calculated that Antarctica had lost over 2.7 trillion tonnes of ice in the last 25 years. Besides, in just the last five years, the speed of ice melting has tripled.

15:35 Strange sounds around the world. Across the planet, people record incredibly loud sounds coming from the sky. In many cases, this alarming rumble is similar to the fact that someone is blowing loudly. What conclusions can we draw in connection with these “apocalyptic” sounds?

17:22 Russia. On July 6 in Stavropol, water filled basements and houses, rising to half a meter.
Heavy rains fell in Sochi and Adler.
According to the hydrometeorological center a third of the monthly rainfall rate fell within one hour.
An earthquake with a magnitude of 5.7 occurred on Kamchatka. According to eyewitnesses, the walls and the floor were shaking, the dishes jingled.
On July 8, a heavy rain hit Vladimir.
On July 9, heavy rain passed in Yaroslavl.
On July 12 in the Rostov region a strong wind was raging.
As a result of flood displacement from the rivers of the Zabaykalsky Krai and heavy rains, a heavy flood situation remains in the Amur Region.

20:06 Record temperatures. The past few months, including April, May, June and July brought with them anomalous heat for many countries of the world.
USA, Canada, Japan, countries of the Middle East and Central Asia, some European countries and even Northern Siberia fell victim to an unheard of in the last 138 years heat. For more details, see the thematic special report of the Breaking News. For more information, watch “Abnormal heat around the world. Record temperatures. Summer 2018. Breaking news. Special report.”
https://allatra.tv/en/video/record-temperatures-summer-2018-breaking-news-special-report

21:38 Poland. Just two weeks ago thermometers showed 32°C in the shade. The massive hurricane ran over the entire territory of Poland the same day evening. The temperature fell down till  8 degrees overnight. As a result of this cold accident quarter of a million inhabitants were cut off from the benefits of civilization only in Mazovian Voivodeship.

22:49 Kazakhstan. The south-west Kazakhstan thermometers are reading off scale due to excessive heat since the beginning of July. The air temperature in shade reaches 46 degrees in several districts of the region at the same time. In the sun, the temperature readings are from 52 to 62 degrees Celsius. The townspeople languish with the heat. The situation is aggravated by the wind, which moves the hot air.

23:11 Georgia. On July 7, torrential rains led to floods in the Svanetia region in Georgia.

23:38 Belarus. On the July 12  the rain showers turned Byelorussian Brest into rivers. The storm sewage could not handle the huge amount of precipitation. Pedestrians had to make their way knee-deep in the water.

28:05 On July 21, 2018, in the city of Gomel, the usual summer rain turned into a fury of nature. On this day, a thunderstorm front passed across the region, as a result of which, according to the Emergencies Ministry of the Gomel Region, there fell a monthly-average precipitation. An orange danger level has been declared.
Eyewitnesses noted that people actively helped each other to get out of danger. Such mutual assistance is very important in all situations!

23:48 Afghanistan. On July 12, a landslide, which  occurred due to the melting of the glacier had destroyed a natural dam in one of the areas of the Panjshir province in Afghanistan. A stream of water has hit the valley. Over four hundred houses have been destroyed in one of the settlements.

30:57 USA. The largest in the world Steamboat geyser already erupted 8 times in the last 3 months, which became a geological puzzle for the scientists working in this area.

The climate disasters are already taking place in different parts of the planet. But who, if not we all together - us, people, can stretch out the helping hand to each other when in trouble .

The program FROM ATHEIST TO HOLINESS
https://allatra.tv/en/video/from-an-atheist-to-holiness

For more information, watch a unique programme on ALLATRA TV: "Се грядёт. It is coming"
https://allatra.tv/en/video/it-is-coming

Fires in Colorado, USA. Melting glaciers in Switze...
24 October 2020 283
View all
Contact the Movement participants
from different countries via ALLATRA IPM Coordination Centre
We welcome you to join
ALLATRA TV
Subscribe to the Telegram channel