MILLIONS of victims → Floods → CHINA, INDONESIA Landslides → NORWAY Cyclone Nisarga → INDIA Cataclysms are becoming more powerful, covering all large regions of the planet. People suffer from natural disasters, often losing their homes, property, and sometimes their lives. In this issue, you will learn about what has already happened on the planet in June 2020 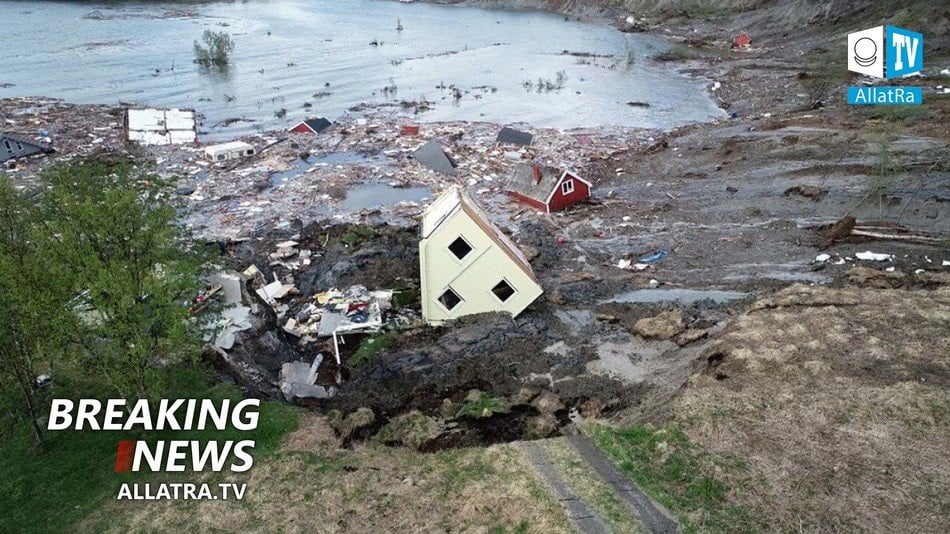 Cataclysms are becoming more powerful, covering all large regions of the planet. People suffer from natural disasters, often losing their homes, property, and sometimes their lives. In this episode, you will learn about what has already happened on the planet in June 2020.


On June 3rd, 2020, Tropical Cyclone Nisarga, which had formed the day before in the Arabian Sea, approached the coastline of Maharashtra state of India. The wind gusts reached 120 (one hundred twenty) km/h.
Unfortunately, there were casualties.
Many settlements were affected, including the city of Alibag, where the roofs of buildings were blown away, trees were downed and power lines destroyed.
More than 63 (sixty three) thousand people were evacuated from coastal areas, where the tidal wave height reached 2 (two) meters.
Millions of residents of the Raigad, Palghar, and Thane districts were left without electricity.
Due to heavy rain and winds, crops in some areas have been damaged.
On June 2nd, 2020 in Assam state of India heavy rains caused by Typhoon Amphan led to landslides and overflow of local rivers.
As a result, dozens of people died. Water flooded an area of more than about 24 (twenty-four) thousand hectares, roads, bridges and infrastructure were also damaged.

Landslides in Norway. Floods in China

On June 3rd 2020, in the Norwegian province of Finnmark in the commune of Alta, a powerful landslide took a large part of the land to sea - together with the houses on the plot.
Four days later, a massive landslide occurred again in Alta commune, destroying a highway. What is the reason for the instability of the soil? Specialists are finding out how safe the area is now.

According to one eyewitness, he was in the kitchen of his country house when he heard a crackle in the walls and smoke from the electrical wiring. Without hesitation, he ran out into the street, where he filmed the process from the outside. Moments later he realized that he was "løp for livet", which means literally "running for life.
An interesting fact is that about a day before the landslide came down, locals observed a kind of warning in the form of a rift on the road.

In early June 2020, the central and southern parts of China were also affected by massive floods. Unfortunately, there are dead and missing persons. In total, about 2 (two) million people were affected in several provinces.
Since 2 of June in Jiangxi province due to continuous rains that caused the floods. Over 20 (twenty) thousand people have been evacuated.

In total, more than a hundred houses have been completely destroyed and vast areas of crops damaged. And in Hunan Province, more than 3 (three) thousand people were evacuated due to the natural disaster. Also, in more than 50 (fifty) rivers, the water level exceeded the critical mark.

On June 6, 2020, almost 327 mm (three hundred twenty-seven ) of precipitation fell in Yunfu County during 24 (twenty-four) hours, which is almost one and a half times the average monthly rate of June. It was also reported about floods and landslides in Hong Kong.

The catastrophic rains that caused flooding are continuing in China. The Ministry of Water Resources has raised the response rate to level III.

On June 3rd 2020, heavy rains caused devastating floods  in Indonesia that affected thousands of people.
In the cities of Tegal and Pekalongan, Central Java Province, heavy tides caused flooding, damaging hundreds of homes. Due to  floods hundreds of residents were evacuated.
At the same time, in West Papua Province on the island of New Guinea, flash floods damaged over a hundred homes. About 500 (five hundred) people were affected. In some areas, flood waters reached 60 (sixty) centimeters.

On June 7th 2020, heavy rains and storms hit some regions of the Czech Republic and Poland.
One casuality and one person missing have been reported during the massive flood in the north-east of the Czech Republic. In several localities, the flood waters reached a depth of 1 m.
In Central and Southern Poland, the storms were accompanied by strong winds that blew away roofs from houses and downed trees. Over twenty-two (22) thousand houses were left without electricity due to rainy weather.

And in the area of Kaniow, a tornado broke out, damaging more than 20 (twenty) buildings. Fortunately, no one was injured.

On the same day in Andorra, located in the eastern part of the Iberian Peninsula, the temperature during the day dropped to +2 C and snow fell. While the climate in the country is quite mild and usually the daytime temperature at this time of year reaches +22 (twenty-two) degrees above zero, and at night does not fall below 10 (ten) degrees.

On June 3, 2020, strong thunderstorms, the so-called "derecho", struck the American states of Pennsylvania and New Jersey. This is a vast mass of winds related to rapid thunderstorms or downpours.
Unfortunately, this phenomenon caused the death of people.
In Reading, Pennsylvania, record wind gusts reached over 134 (one hundred and thirty-four) km/h.
Over half a million people were left without electricity.

On June 7, 2020, tropical storm Cristobal entered the coast of the Gulf of Mexico in the United States. Heavy rains caused flooding in the states of Louisiana and Mississippi.
And the storm surge in some places reached almost 2 (two) meters, due to which the streets of Waveland were flooded.

Drought in Ireland, a heatwave in Germany

Residents of Northern Ireland have experienced the worst drought in 44 years.
The spring of 2020 was the sunniest ever observed in the region.
The number of hours of sunshine exceeded the season's average by almost 32%.
And the average spring temperature in Northern Ireland was 1.25 °C (one whole twenty-five hundred and fifty degrees Celsius) higher than usual.

Another factor that preceded the dry season was the prolonged absence or decrease in precipitation. For example, in some areas, it was only 52% of the average amount, while in some places it was only 15-25%.

I live in the Republic of Ireland, it's a little bit further south, and we also had an atypical spring for a normally rainy island.  And then for almost 3 weeks there was no rainfall at all, there was abnormally hot weather. That's why the country is now in need of saving fresh water. There was a ban on watering homestead lands, it is also impossible to fill private pools.

Farmers note that this is the driest spring of all time. The duration of the drought may affect the decline in crop yield, which was also facilitated by this year's extremely humid winter. Such variations in weather conditions are abnormal for this region.
And what are these fluctuations related to? And what global consequences can they have?

In Germany, this spring is also the sunniest in 90 years.
A new record has been set in the history of record keeping, it was recorded 100 hours more than the usual number of sunshine hours during the season.

Natural disasters that threaten the lives of people are becoming more frequent every day. And if we cannot avoid them, we can prepare for them and minimize their consequences. This requires basic knowledge and the desire of people to use it. Together, people can do a lot. Disasters force people to rethink their values and the Value of Life comes to the first place. Together, we can help ourselves and others survive the coming climatic events.

Realizing this, the Creative Society project is being implemented on the platform of ALLATRA IPM .

More about the project: allatraunites.com

WHAT IS THE CAUSE OF THE FIRES? Wildfires in Calif...
07 September 2021 1127
View all
Contact the Movement participants
from different countries via ALLATRA IPM Coordination Centre
We welcome you to join
ALLATRA TV
Subscribe to the Telegram channel