Increase of seismic activity all over the world. What is coming next? Urgent news 5

Increase of seismic activity all over the world. What is coming next? Urgent news 5 In the 5th episode, the correspondents of ALLATRA TV from Great Britain, Australia, Italy and Mexico will tell us what climatic anomalies and unexplained natural phenomena are sweeping the planet. Everything clearly indicated that It is Coming. 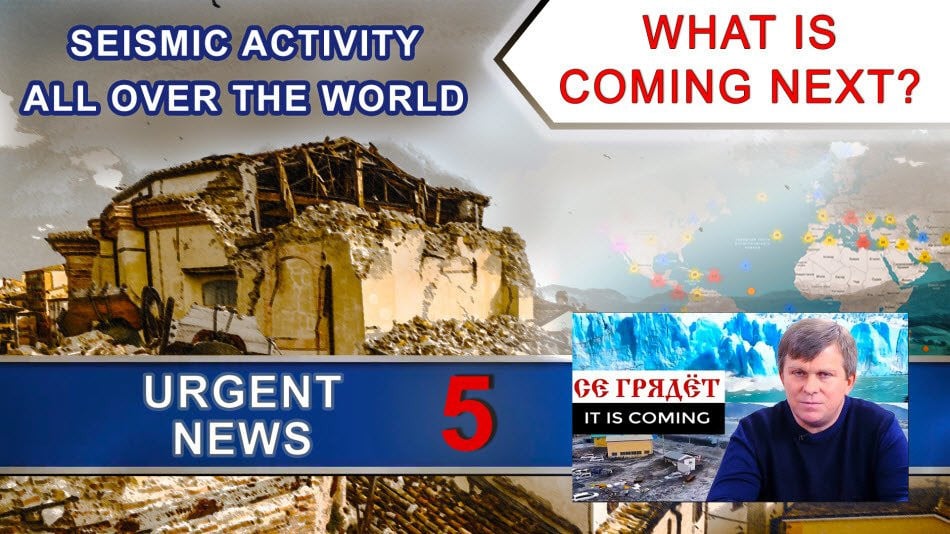 Increase of seismic activity all over the world. What is coming next? Urgent news 5
7 March 2018
( 0 )
subscribe:
Leave a comment

In the 5th episode, the correspondents of ALLATRA TV from Great Britain, Australia, Italy and Mexico will tell us what climatic anomalies and unexplained natural phenomena are sweeping the planet. Everything clearly indicated that It is Coming.
In the programme  “Се грядет. It is coming” Igor Mikhailovich Danilov has touched on the subject on climate events on the planet and the real causes of what is happening with the climate.

February 17, 2018 Oaxaca, Mexico: one more powerful earthquake occurred with a magnitude of 7.5 points.

One of the last powerful earthquakes in Peru took place on January 14th, 2018 and we got in touch with an eyewitness to this earthquake. We will also tell what seismic danger in Peru is connected to.

An eyewitness Vyacheslav from Australia, whose work is directly connected to elements of nature has told us that the cyclones’ force is gradually intensifying and changing its direction. It is especially clearly seen in the last 10 years.

Vyacheslav: “When in a severe storm, a ship is thrown just like a walnut-shell, it becomes understandable how pathetic in reality are all these technological attempts of the mankind to withstand the power of nature”.

The night of February 12, 2018 more than 300 earthquakes took place on the Portuguese archipelago of the Azores, which made the Office of Civil Protection issue a request to the population to stay alert.

Let us recall that on the 2nd of October, the Italian Meteorological Service, Centro Meteo Italiano, warned about the activity of the underwater volcano Marsili, which is located between Naples and Sicily.

These days, the release of vapour and red dust was recorded by eyewitnesses in the region of Etna volcano. Some eyewitnesses have confirmed that on the 12th of this month, Etna released several clouds of hot gas, emitting red ash into the air. After the warning which was given in December of 2017 about possible eruption of Stromboli and Etna, there is no doubt that the volcano may awaken in the nearest future. Obviously the cataclysms in Italy are growing in intensity

People from all over the world are now joining the "BREAKING NEWS" project, translating the programme into other languages because they understand how important and relevant information about real climate events on the planet is today.
Sometimes, the future of all humankind depends on the personal choice of each person.

Big thanks to ALLATRA TV reporters from all around the world for illuminating the events which give an understanding that global climate change on our planet is happening already today!

Report “On the Problems and Consequences of Global Climate Change on Earth. Effective Ways to Solve These Problems”
https://allatra.org/pages/climate