How I Understood What an Inner Enemy Is. Olga Parfyonova (USA). LIFE VLOG

How I Understood What an Inner Enemy Is. Olga Parfyonova (USA). LIFE VLOG It happens very often in life that consciousness convinces people that enemies and enslaves are everywhere.  But is it really so, or is it one of the illusions which our consciousness draws for us, just to take us away from the truth, which is simple and lies only in the fact that the enemy is inside!!! 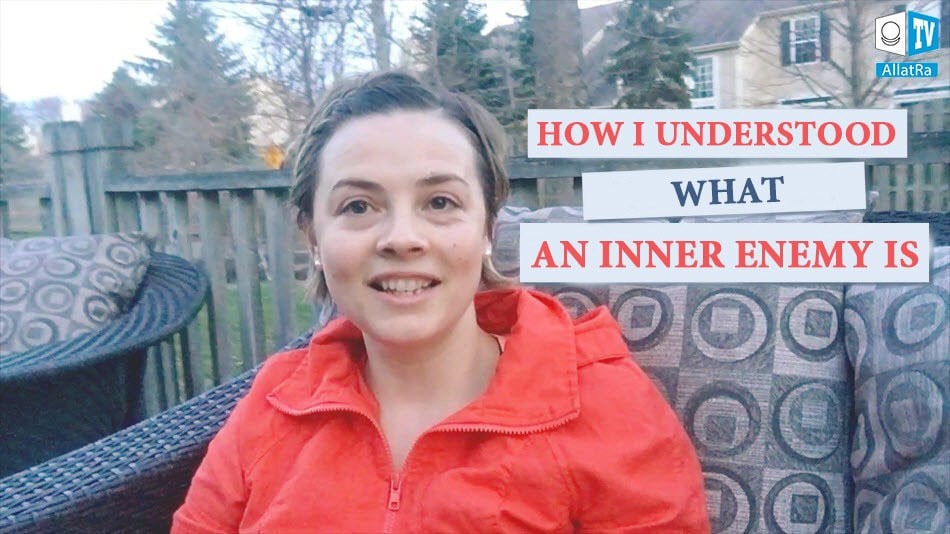 How I Understood What an Inner Enemy Is. Olga Parfyonova (USA). LIFE VLOG
30 September 2018
( 0 )
Translation
Русский
subscribe:
Leave a comment

It happens very often in life that consciousness convinces people that enemies and enslaves are everywhere.  But is it really so, or is it one of the illusions which our consciousness draws for us, just to take us away from the truth, which is simple and lies only in the fact that the enemy is inside!!!

There is no need to look for him on the outside,  you need only to listen to that annoying little voice that constantly whispers nasty things and offers to bring the offender to justice.

Then everything falls into place  immediately and  there comes a simple and clear understanding that all the troubles happen only because of  the fact that I keep  listening to my consciousness, but all I have to do is to  expose the enemy that's inside of me and to take responsibility for everything that happens in my life!

The programme: “CONSCIOUSNESS AND PERSONALITY. From the inevitably dead to the eternally Alive.”

Today I would like to share with you my insights and understandings after watching the programme "Consciousness and Personality. From the inevitably dead to the eternally Alive". I would like to talk about the inner enemy. This topic, actually, is very interesting, because  I’ve noticed that I, myself, always look for enemies in the external. And it was said a lot of times "that the enemy is inside, there are no enemies outside, he is inside". All this has been falling on deaf ears. And I still wanted to complain about someone, to blame someone for something, to suspect someone of something, but not myself. And just not to look into myself. And so, when I began to listen to the programme once again, I drew particular attention to this. And decided to address this issue in greater detail.

Actually, this topic of "the enemy in the external", it has lasted, I don’t know, since childhood probably. We have to go somewhere, fight with someone, prove something, expose somebody. For consciousness, actually, it’s a lot of fun. And what about the personality? After all, all these moments, what do they lead to? To the fact that you quarrel, argue, ruin your own and other people's mood. And eventually you end up no better off than before. You are just being eaten of, like in a restaurant. But when you know that the enemy is inside, and what he wants from you, and that it all is some nonsense and constant antagonizing other people. After all, because, for example, when it antagonizes  my mom, my friend, someone else, it's me whose mood ruins, a loop of thoughts begins that they did something to me, that they told me something wrong, that they want something from me.

And, mostly, as we know from the programmes, one consciousness wants to dominate the other consciousness. And immediately competition starts, which one of us is stronger, who is more cheerful. And the enemy, he always kind of looms in the external. She told me something wrong. But when you look at all this in a completely different way and search for the enemy in yourself, then you have no enemies. You start treating all people very well. Even if they say something wrong, even if some word is offensive, for example, for consciousness. But you ask yourself a question: what is happening now, and who is responding to all this inside of me? Why do I react to this? What is associated with this?

There is a recent example. We were at a meeting. At that meeting, we were invited to another meeting. And suddenly I begin to notice that my consciousness starts to fuss. I actually like to attend various events, I find it interesting to talk with people. But now, this is straight, "I don’t want to go..." I hear it distinctly inside, "I don’t want to go", and there are  tears. I don’t understand what's going on. "Because that person will go." Okay. So what? "Because he never lets us say anything, he decides everything for us. I don’t want to go with him. He won’t let us speak." And all this is kind of antagonizing. And I already understand that it is antagonizing that person. Some negative attitude towards him appears. Answers are already not-so-good.  Planning begins, "How will I put him in his place at that meeting?" Or something else. I come home. I start talking to my mom, and I understand that the conversation is going in a wrong way. We start discussing that person. And my mom says, "Well, he has to pay attention to this". And I understand that something is already wrong. Then I phoned another girl. And we also had a talk. And then I'm like, stop. What's going on? Not only do they turn me against another person, but I also think about him, meaning, I already somehow  influence him, say something about him. But what is the reason? I started to look into myself. I think, "Well, this splinter is somewhere inside of me, it sits within." And when I began to look deeper, I understood! She doesn’t want to go, because she wants to be the leader. She wants, and, as it turned out, she wants to speak correctly, as she will come to these people. She will give her clever speech and will have her own flock. When I saw this, this desire for secret power of consciousness, then everything, of course, changed. And immediately there are no claims against  the person. And all questions are only to myself and to everything that happens inside of me.

Recalling my life, for example, I observe that there is the same problem with my relatives. Well, someone told you something, or your consciousness again disliked something, and there it begins, “I'll remember you, I will remind you of it” And the antagonizing starts from secondary consciousness. “How could she say that! She probably lost her mind! Just look, you are disrespected! Come on, come on, we'll also tell her some nasty words.”

You know, once there was such a situation that someone said something. And I'm starting to play. Consciousness tells you, “How could she tell you that, why did she say that?! Tell her that she shouldn't have said that. Tell her you're offended”. I’m sitting   and thinking logically - stop. I am offended. Whom is me? Consciousness. What can I say, “Sorry, you’ve said this, and it offends my consciousness”. Well, it’s completely ridiculous. Right? Why do I care about consciousness? I start looking at this this from the other side. Consciousness, “Well, that’s wrong. We are spiritual people, after all”. I'm going over, but no matter how I try to charge the person with something, I understand that it’s not her fault at all. Whereas the enemy, it is inside. This is my own reaction to what’s been said. Maybe, she didn’t mean anything, but under antagonizing by secondary consciousness it turns out that the person is my enemy. But she’s not my enemy. Maybe, she didn’t mean anything at all. But this antagoning from having a pity on myself as consciousness, from the fact that something had been done to me? Well, what can they do to me in three-dimensionality? What? Well, absolutely nothing. After all, I'm  Personality. I don’t care about anything like that. Consequently, it is consciousness that is offended. Well, I don’t care about it. Let it do whatever it wants.

I should either nail it to the wall or simply ignore. And not to pay attention to all that stunts, fuss. And when I know exactly that the enemy is inside of me, and I don’t even try to hide this and pass the buck, because I take responsibility for that myself. I understand that these are my reactions, these are my actions, these are my deeds. Other people, they aren’t involved at all. Well, of course, I'm not talking about something sort of terrible. I mean that, for example, someone said something. And, secondly, I don’t know what people meant. But immediately, under the antagonizing by secondary consciousness, which draws enemies in the external, at once all people around are enslavers, everyone around wants to dominate. He wants to dominate you.

But now, it already makes me laugh that he wants to dominate, or she wants to. I even laugh out loud, “Of course, you can be dominated over... Well, yes, definitely. Everyone wants to dominate you. You get no change out of it. We have piles of ambitions of that kind ourselves. Always looking for someone to dominate over”

And therefore, guys, for myself I’ve realised that it’s very important to take full responsibility upon myself. And if I don’t like something, first of all, I should look inside myself, and not to point the finger at another person and blame him or her for all deadly sins. Everything is inside of me. And even when you are in a good spirit, with this filling, with this feeling, after all it's… I don’t know, whatever a person tells you now, you understand who is talking to you now. You see this. And you just don't want to answer him anything. And inside, it is nice and quiet, because you understand that it really doesn’t matter. It’s not important. But once consciousness infiltrates, and you give it your attention, it begins this outlining of the enemies in the external. That everyone, completely everyone is an enslaver. That everyone wants something from you. But it’s not true at all.

And for myself, as an axiom, I accept that as soon as I start to complain about someone, even in my head I hear, "Ah, he did something, bla bla bla...", it means that something begins. It is necessary to sit down, either write down or phone someone and understand the situation. What is going on, and why the enemy is in the external again. And why someone is bad again, but not me. Well, generally speaking, there are such insights, understandings as for today. So, one shouldn’t search for enemies in the external, swear or quarrel. It is better to direct attention inwards. Who and what allows all this to develop.

And, please, undoubtedly share your insights, understandings after watching the programmes. This is very important, because every programme and every vlog, is unique, individual and reveals something new. And, please, guys, record your insights and understandings horizontally, but not vertically, because this way it’s more convenient for us to edit them, and it's better to watch.

Thank you very much. I'll leave the link. Don’t be shy, do send.

That’s all. Goodbye everyone. Have a nice evening.

My insights with Olya Parfenova 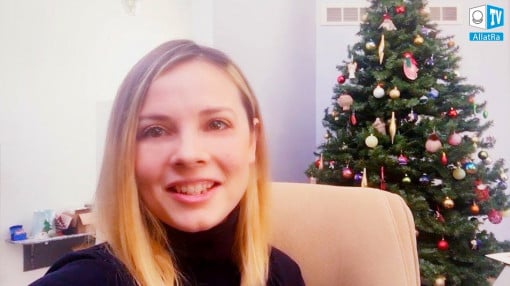 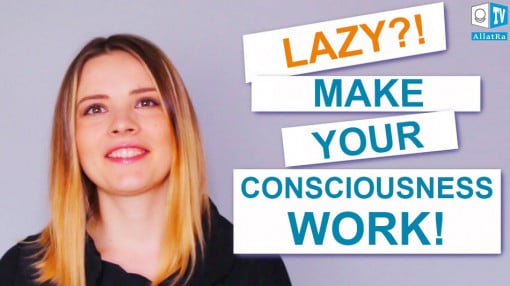 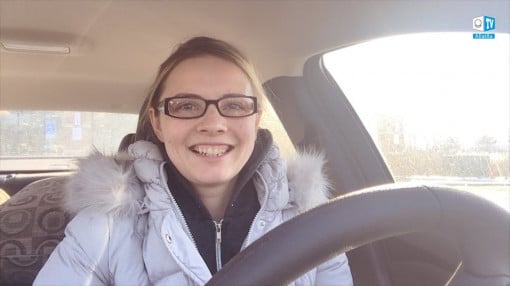 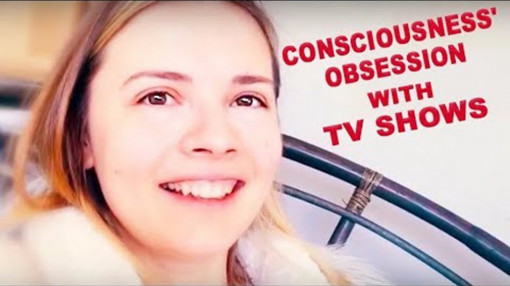