Natural disasters - climate change. Firsthand accounts: Japan, Indonesia, China, Canary Islands, Russia In this issue of the Climate Breaking News on Allatra TV: changes in cosmic weather - growth of cosmic radiation, the aftereffects of the anomalous heat wave in Europe, the typhoon Mangkhut in China, earthquake and  the consequent tsunami in Indonesia, the flooding in Volgograd, typhoon Jebi in China, earthquake in the Urals, an eyewitness report, abnormally low temperatures at the Canary Islands in 2018, examples of mutual help among people. 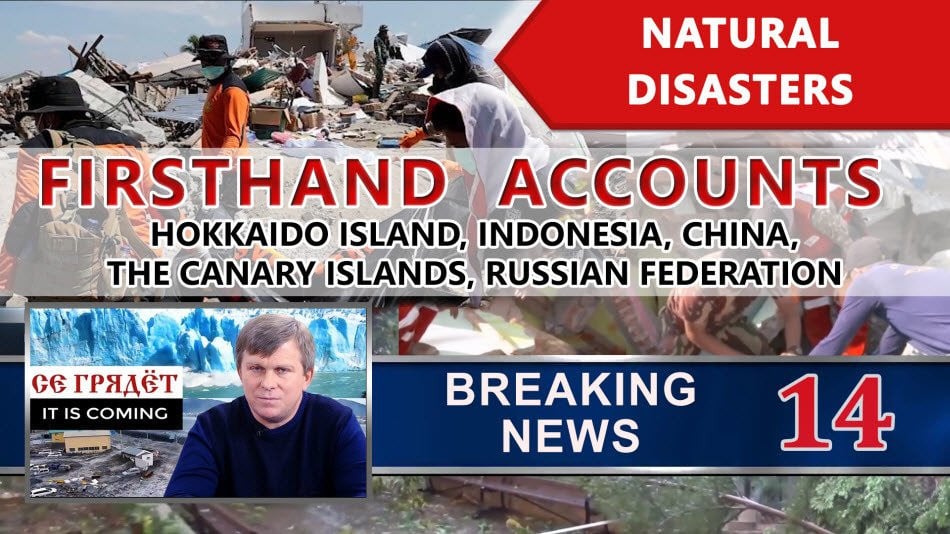 In this issue of the Climate Breaking News on Allatra TV: changes in cosmic weather - growth of cosmic radiation, the aftereffects of the anomalous heat wave in Europe, the typhoon Mangkhut in China, earthquake and  the consequent tsunami in Indonesia, the flooding in Volgograd, typhoon Jebi in China, earthquake in the Urals, an eyewitness report, abnormally low temperatures at the Canary Islands in 2018, examples of mutual help among people.

0:50 - Global climate change and natural disasters can’t be denied. They are obvious and  irreversible. In the annual release of “The Global Risks Report” by the World Economic Forum in 2018, the main threats to humanity were announced.

2:53  The Canary Islands, Tenerife. The residents of the islands are witnessing substantial climate changes. This year there’s practically neither spring, nor summer. The temperature isn’t rising higher than 24 degrees and there’s a very strong cold wind. In the evening and at night it gets as low as 12-16 degrees. It’s supposed that these changes are connected with the changes of the Gulf Stream. The director of the Volcanology Institute Nemesio Perez (Tenerife Island) said that in the last year the seismic activity on Tenerife in the regions between Tenerife and Gran Canaria has increased.
5:47 - increase in cosmic radiation activity
6:49 - Europe. The shallowing of the Danube, the consequences for the European ecosystem.
8:29 - Japan, Sept. 2018. Typhoon Jebi was moving to the west from the city of Fuku with the speed of 65 km/h and the wind gusts reaching 180 km/h. The typhoon also reached Primorski Krai in Russia.
9:40 - Japan. A series of earthquakes with the maximum magnitude of 6.7.
11:17 - China. Hong Kong. September 16, 2018. Typhoon Mangkhut  with the wind speed reaching 250 km/h. Examples of people’s mutual help.
13:17 Russia. An account of the flood in Volgograd in summer 2018
from a firsthand. A natural disaster comes and makes everyone equal, the same as when we come to the world because all the material things are worth nothing in the face of a disaster. Only the value of life remains and only the value of that chance which we can use and should use, should realize here. In fact, only unity and joint efforts can help people overcome any difficulty.

14:46 Indonesia. Sept. 28, 2018. A sequence of powerful earthquakes with the magnitude of 7.5 and following tsunami with the height of 6 meters. A tsunami warning was issued, but due to unclear reasons it was removed 30 minutes later. The most important is that as eyewitnesses  report, people are not desperate and help each other.
16:14 The beginning of October 2018. A sequence of strong earthquakes in the Ring of Fire area.
17:20 Indonesia, island Sulawesi. Firsthand reports from people who got into the epicenter of the sequence of severe earthquakes. Inspiring examples people’s mutual help.
20:09 China. A report from an eyewitness of the earthquake in 2008. How people united and were able to help each other survive.

24:45 Russia. Firsthand accounts of the earthquake in Yuruzan on September 5, 2018. “At that moment there came an understanding that brought my consciousness to the dead end, that that moment could have been the last moment for me and my family… Then happens a powerful shake, a powerful awakening, awakening from the life in which we are anxious to get somewhere, rushing, running, but at this moment all that was important yesterday loses its value.

30.10: It’s Coming, an excerpt from the program: “Humanity which could unite, unite in love and respect as one family, which it should be, all the humanity, it would be able to resist anything”.

“In this regard, it is extremely important to globally and quickly change the values of society from the consumer format to the spiritual, moral and creative one, where good, humanity, conscience, mutual help, friendship, and the dominance of spiritual and moral foundations would stand in the first place in relationships among people, regardless of their nationality, religion, social status and other conventional and artificial divisions of the world society. When all people strive to create life that is convenient for all others, then in this life they will preserve themselves and their future…” from the report by ALLATRA SCIENCE “On the Problems and Consequences of Global Climate Change on Earth. Effective Ways to Solve These Problems”
https://allatra.org/report/problems-and-consequences-global-climate-change-earth

For more information, watch a unique programme on ALLATRA TV: Се грядёт. It is coming
https://allatra.tv/en/video/it-is-coming

The movie ATLANTIS. THE ELITE IN SEARCH OF IMMORTALITY
https://allatra.tv/en/video/atlantis-the-elite-in-search-of-immortality

WHAT IS THE CAUSE OF THE FIRES? Wildfires in Calif...
07 September 2021 1031
View all
Contact the Movement participants
from different countries via ALLATRA IPM Coordination Centre
We welcome you to join
ALLATRA TV
Subscribe to the Telegram channel