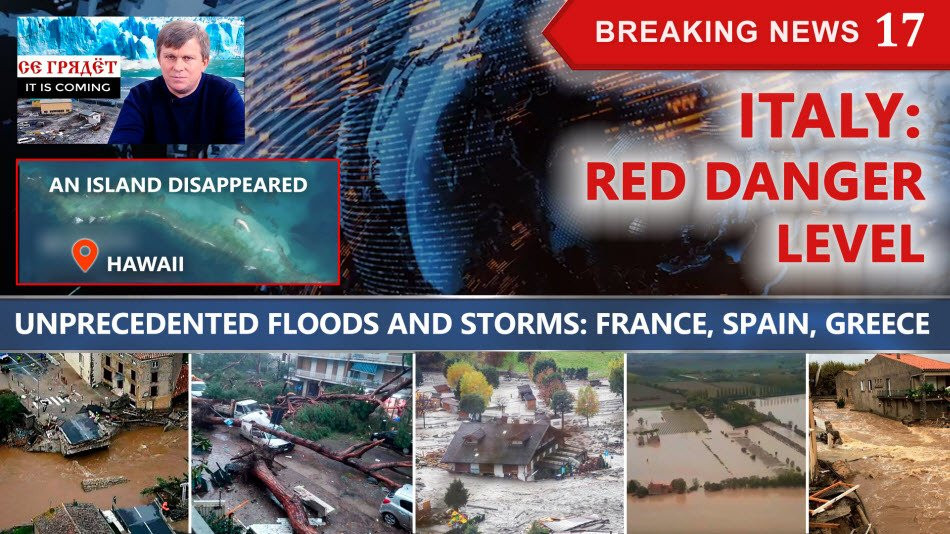 An increasing number of natural disasters, extreme weather occurrences all around the world show an alarming trend of their dramatic growth. People all around the globe already encounter natural catastrophes even in those places, where they had not happened before, and this is the fact of today. ALLATRA TV reporters will tell you about what happened in the world during the last weeks.

In these recent times more and more events happen on Earth, which before would have lasted for decades. For example, such as submerging of the entire pieces of dry land under the water. We can observe such events nowadays. East Island of the Hawaii archipelago is an example. The report of ALLATRA TV participant from Hawaii islands (USA).

On the 24th of October, 2018 the tropical storm Yutu, having changed into super category 5 typhoon, hit the South Mariana islands Saipan and Tinian. The wind speed reached 290  km/h with gusts of wind reaching 350 km/h. The super typhoon resulted in destruction of houses and infrastructure of the island, electricity blackout. Yutu became the most powerful typhoon, which passed over the Mariana islands, and the third typhoon of the 5th category, observed at the archipelago. It is expected, that Yutu is to reach Philippines, Taiwan, and South of Japan next week.

Interview with experts of the agricultural sector of Ukraine on climate change and atypical weather that have been observed in recent years.
On the 12th of October, 2018, Ireland witnessed a storm called Callum.

The eyewitness report:”The storm brought really strong gusts of wind, heavy rain, and cold weather to our country”.
“One day, we will be forced to move to other countries, for example, because of upwelling, but we would be very happy to have the opportunity to live in friendly relations with everyone. Of course there are differences, languages and so on, but everyone should make an effort.

It is the difference between "have" and "be." You are not what you have; you are who you are. If you lost your property, it does not change the fact you are still a man.

Germany. Shallowing of the river Rhine, the eyewitnesses report.
In October, Cyprus happened to be in the bad weather’s mеrcy. At first, snow fell on the mountains, then the island was covered with a cloud of dust, and soon after that there came heavy rains. However, the area of Nicosia suffered most.

On October 26th, a powerful earthquake of 6.8 magnitude occurred in the Ionian Sea near Greece.

Romania. The Vrancea mountains, a powerful earthquake of 5.5 magnitude.
Italy. Powerful hailstorm struck Rome on October 21, as a result several metro stations and the central roads of Rome were flooded.

On the October 28 a powerful and devastating tornado swept through the Italian commune of Manduria, In the different regions of Italy a red level of danger was declared.
The most dangerous situation was in the regions of Veneto, Friuli-Venezia Giulia, Liguria, Lombardy and Trentino-Alto Adige.
in Venice, the water level rose up to 156 cm due to the storm surging of water from the Adriatic Sea.

Spain. Heavy rains and snow have caused electricity shortages. About 53 thousand inhabitants of Minorca (Balearic Islands) and Asturias were left without power supply.

One cannot ignore a rapid growth of climate changes, as any  person faces them one way or another.

Have you ever had such thoughts: “Why would I watch negative stuff, that catastrophes happen somewhere, and people die? There is nothing I can do about it anyway.” But, probably, we should change the way we look at this? If we, people, turn a blind eye to the reality, which most of the planet is already facing, will it help us to survive the cataclysms occurring more often by the day? What is the price of inaction when it comes to life of every person and civilization as a whole? Or should we rather make our Choice and act as real People do?!

For more information, watch a unique programme on ALLATRA TV: "It is coming"
https://allatra.tv/en/video/it-is-coming

The movie ATLANTIS. THE ELITE IN SEARCH OF IMMORTALITY
https://allatra.tv/en/video/atlantis-the-elite-in-search-of-immortality

The report by ALLATRA SCIENCE “On the Problems and Consequences of Global Climate Change on Earth. Effective Ways to Solve These Problems”
https://allatra.org/report/problems-and-consequences-global-climate-change-earth