Rivers Flow Backwards → Hurricane Laura. A powerful storm → Italy. Floods → Sudan, Cameroon, Niger In this episode  we will talk not only about what has happened on the planet recently 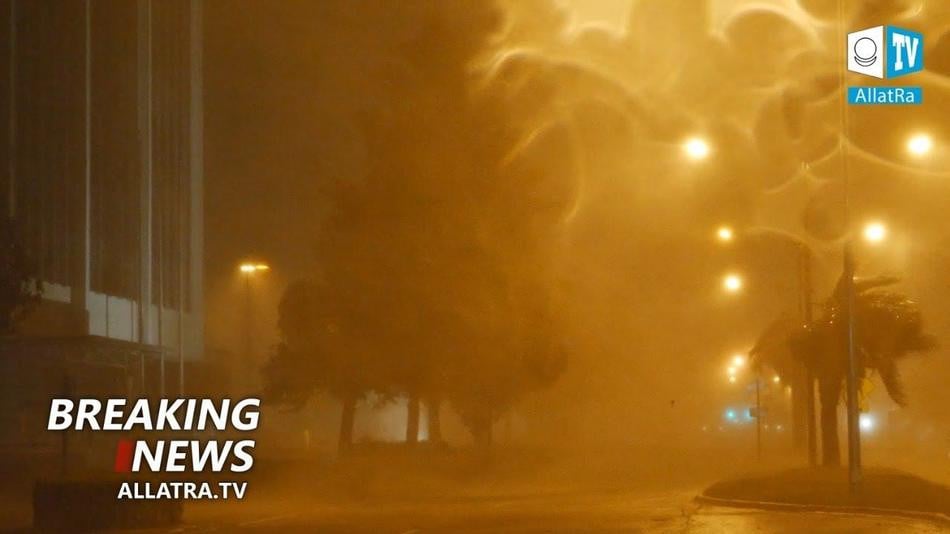 We are happy to welcome you on the LIVE broadcast of the Breaking News on ALLATRA TV.
In this episode  we will talk not only about what has happened on the planet recently but also about the reason why building a Creative Society is the only way out of this situation for humanity.

Hurricane Laura in the United States

In the last episode, we talked about the devastating Hurricane Laura that hit the Caribbean islands and then reached the southeast of the United States.
As a result, a state of emergency was declared in the states of Louisiana and Texas.
On August 27, 2020, Hurricane Laura, Category 4, invaded the state of Louisiana, USA. Unfortunately, it brought catastrophic destruction and lots of casualties. Because of the strong wind and rain, some buildings were literally torn to pieces, the coastal areas were flooded and trees were felled.
Over 800,000 (eight hundred thousand) residents of Louisiana and Texas were left without electricity.
The spontaneity left behind cities, filled with rubble and other garbage. And in the city of Lake Charles in addition to the damaged buildings,steel poles were bent and there was a leak of chemicals from the plant.
On the same day, having weakened to a tropical storm with a wind speed of 64 (sixty four) km / h, Laura moved to Arkansas.

The wind force of Hurricane Laura was so strong that the surface water in the Mississippi and Neches rivers began moving against the mainstream.
And it is often believed that by influencing the hydro regime, through  changing river beds, building dams, draining rivers and water bodies man can affect the climate globally. But when you see that the Hurricane only had a few hours to turn back the rivers, you realize how much more power storms have compared to human influence.

It should be noted that timely evacuation of the population allowed reducing the number of human casualties.
We also found stories of people who, without thinking about themselves, tried to save and help others. The head of one of the Lake Charles City Hospitals shared: "It was scary. At some point, the wind became so strong that we had to move the patients to the corridors”. Doctors took care of them, not knowing if their own houses could resist.

We have also found another example of how people help and support each other.
Leonard Harrison is a volunteer for a search and rescue organization. He has previously helped people cope with the consequences of natural disasters. And this time, he came from North Carolina in his truck to help anyone who needed help.
He met 85-year-old Florine Richard, who was standing and looking at her house damaged by the natural forces. Harrison gave the woman a three-day supply of food and several bottles of water. Supporting her, he said that the house is just a house, the main thing is that she is still alive.
Harrison witnessed how hurricane-force winds twice moved his truck weighing more than 4.5 tons, and also added from himself, "It was the fastest moving storm I've ever seen."


From 28 to 31 August 2020, severe storms with giant hail and tornadoes hit Northern Italy. Several cities were significantly damaged. Unfortunately, there are casulaties and several people are missing.
In Cremona, Mantua and Bergamo, hail the size of a chicken egg fell, and roads had to be cleared with heavy machinery.

Also, the city of Verona was again affected by a natural disaster. There were severe floods, giant hailstones and powerful winds that caused significant damage. The Vicenza and Belluno districts were severely affected.
A tornado swept through Vicenza, knocking down trees, fences and road signs, as well as damaging buildings.
And on August 29, during the storm, residents of Genoa and neighboring cities observed several water tornadoes in the sea.
One of them made landfall and caused damage to the buildings. Unfortunately, there is an injured  person.
On the same day, a severe storm, torrential rains, hail and a devastating tornado hit Majorca, Spain's largest island. Downed trees caused blocked roads, and broken wires caused a power outage. There were also floods and landslides in some parts of the island.
Fortunately, no one was seriously injured.

On August 31, 2020, a powerful storm covered Warsaw in Poland. It was accompanied by strong winds up to 95 (ninety-five) km/h, rain and numerous lightning.
As a result of the disaster, trees were felled, cars were damaged by fallen branches, and underground passages and streets were flooded. Tens of thousands of people were without electricity.
The amount of precipitation was up to 40 (forty) mm, with a monthly norm of 58 mm. After the storm, the water level in the Vistula river rose by 5 (five) cm.

Floods in Africa, India and Sudan

At the end of August 2020, heavy rains in Niger, West Africa, led to massive floods - dozens of people died. About 220 (two hundred and twenty) thousand local residents were forced to leave their homes. Because of the flooding of the Niger River, some parts of Niamey city were flooded.
Dozens of clay houses collapsed along the flooded coastline, and much farmland was drowned.

Just in the last week of August, floods affected almost 26 (twenty-six) thousand houses, many buildings were damaged, hundreds of granaries were flooded. Last year, over 130 (one and hundred thirty) thousand citizens became internally displaced due to this natural disaster.

Meanwhile, on August 21, 2020, a heavy rainfall led to flooding in southwestern Cameroon.
About 900 (nine hundred) families were evacuated due to the natural disaster.
In the city of Douala, roads were flooded, transport infrastructure was disrupted and houses were severely damaged.
In late July 2020, heavy rains resulted in flash floods that affected more than 5,000 (five) thousand people in northern Cameroon.
On August 25, 2020, in the Indian state of Odisha, torrential rains caused floods that killed dozens of people. Because of eroded roads, hundreds of thousands of people were isolated from the rest of the world.
In five locations, the level of the rivers exceeded the dangerous level. People were also evacuated from unsafe areas.
On the 1st of September 2020, dozens of people died in Sudan, after a record flood during the rainy season.
About 380 (three hundred and eighty) thousand people were affected. The disaster caused damage across almost all the country.
About 80 (eighty) thousand houses were damaged, many families had to leave their homes and seek shelter at their relatives or community centers.
Over 5 (five) thousand cattle were killed. And after a record flood of the Blue Nile River, 80 (eighty) thousand hectares of agricultural land was damaged or destroyed.

It is difficult not to notice catastrophic floods, snow in the middle of summer, or the increasing number and strength of storms, along with other disasters.
The climate is changing, and when will we all change?
It is already necessary to negotiate at the international level and help each other cope with sudden natural disasters, as well as to help hundreds of thousands of forced immigrants adapt to new living conditions.
In our time, more than ever, the format of a creative society is needed instead of the current consumer one. After all, it is obvious that only in this case, civilization has a chance to survive and somehow offset the consequences of natural disasters, as well as to cope with the upcoming climate tests with honor.

WHAT IS THE CAUSE OF THE FIRES? Wildfires in Calif...
07 September 2021 820
View all
Contact the Movement participants
from different countries via ALLATRA IPM Coordination Centre
We welcome you to join
ALLATRA TV
Subscribe to the Telegram channel